The Highbush Cranberry makes a good privacy screen and has beautiful fruit, flowers and foliage.

Viburnum trilobum aka High-Bush Cranberry and American Cranberrybush Viburnum. The Highbush Cranberry makes a great privacy screen. Beautiful fruit, flowers and foliage. Prefers fertile, moist, well-drained soil. Will do poorly on sandy soils without irrigation due to its shallow roots and water requirement. Saline soils are also not suitable. Tolerant of urban pollution. 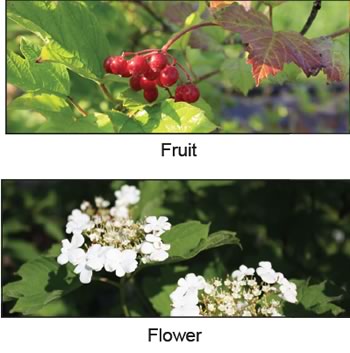 A native plant is defined as a species of fauna that was already established before colonization. There are numerous benefits to the use of Native Plants. Native plants have grown and evolved in a given area for generations and therefore are more prepared to face the elements. As a result they are much hardier and less finicky to care for. The wildlife in the area has also evolved along side these plants, and because of this has formed bonds with them. Most butterflies have a specific plant species from which they collect nectar for their offspring. There are many birds that will feed directly from local trees for seed, nectar or fruit, but won’t use the bird feeder you’ve bought to attract them. These plants also work together to grow as natural plant communities. Most of the trees won’t grow their leaves until after the wildflowers have had an adequate amount of time to flower before they’re covered by shade. Finally, of course, there is the fact that all of these plants and animals combine to make a sustainable, complete, functioning ecosystem. Why fight thousands of years of evolution?

About the Author More by Ian Payne

Highbush cranberries (aka American cranberrybush) are in the same family as elderberries and they make a great privacy screen.