House For Sale / The Power Of Positive Thinking

Modern-day urban myth dictates that if you bury a plastic statue of Saint Joseph upside down in your yard, your home will sell very quickly.

Our house is for sale. Darrel and I have enjoyed our home for over ten years, but it is time to downsize – just a little. The teenagers that moved into this home, along with us, grew up to be fine men and moved out. Now, we have too many empty rooms, too much acreage, and too many hired hands doing the work Darrel and I don’t have the time to do. It doesn’t make any logical sense to stay here any longer.

Will we miss this place? Of course we will. This home and property have served us well over the years. We’ve enjoyed mini-boat races on the little river that meanders through our property. We’ve hosted many parties and events, bonfires and BBQs. Two pets that we “loved and lost” are buried here. A lot of living and laughter have filled this home over the years. Despite all the memories, we are ready to embrace a new chapter in our lives.

Are we moving to town? No sireeee! We are country folks at heart and we will be staying in the same area, continuing to enjoy all that rural life has to offer. The real estate sign is on the lawn. The house has been readied for potential buyers. We are all set to go – with the exception of one small detail. We can’t find a St. Joseph statue!

For those of you who are unaware of this important tradition, Saint Joseph has long been considered to be the “Patron Saint of Real Estate.” Hopeful home sellers, regardless of religious affiliation, believe in the magical qualities of this little statue. There are several theories as to how this ritual came to be. The original idea was that St. Joseph was a talented carpenter and therefore held some special powers. Some claim the practice was originated with German carpenters who buried the little statues of St. Joseph in the foundations of houses they built. Others say the custom began in the Middle Ages, when an order of European nuns buried a medal of St. Joseph in the hope the Saint would help them to establish a convent. 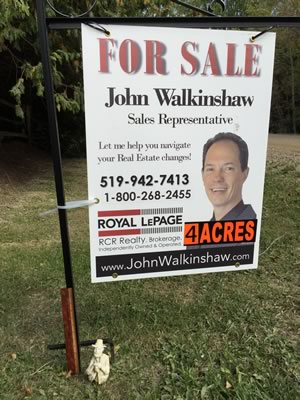 Saint Joseph has long been considered to be the “Patron Saint of Real Estate.”

Regardless of which Saint Joseph story you choose to believe, modern-day urban myth dictates that if you bury a plastic statue of Saint Joseph upside down in your yard, your home will sell very quickly. In the 1990s, this custom caught fire! Realtors were buying the little plastic statues by the caseload. Home buyers bought into the idea and were astounded by how quickly their homes sold. The reason for the upside-down burial is because Joseph will “work extra hard to get out of the ground and onto someone’s mantel”.

There is a rumour about an impatient home seller who moved his statue to several different places in the yard. Finally, in disgust and disbelief, he tossed the statue into the garbage. Imagine his surprise when he opened the local newspaper a few days later and read the headline, “Local Dump Has Been Sold”!

Now that I’ve explained the importance of the St. Joseph statue, we shall return to my dilemma. I do not have a statue of this famous saint to bury in my lawn. Several years ago, I purchased one in Lilydale, N.Y.  True to tradition, I buried him in the grass, and sure enough we were very fortunate to sell our Mansfield home. I gave him to my parents, and once again St. Joseph worked his magic and attracted buyers to their home in Collingwood. My parents donated this enchanted statue to their friends, who, in turn, forwarded it to their friends, etc., etc. My St. Joseph statue was never to be seen again… but I like to believe he is still out there somewhere, helping frustrated home owners sell their homes.

I have never been one to be easily defeated and I am certainly not one to follow rules. I decided that I had to come up with Plan B. I recalled telling a friend about St. Joseph when she was attempting to sell her home in Orangeville. We managed to find a figurine of a gnome who was talking on an old-fashioned telephone. We wondered if this would be an adequate substitute. Sure enough, several days after we buried the “Gnome on the Phone” in her front garden, her home was sold. I thought perhaps I could borrow her standby statuette but was saddened to hear that Mr. Gnome remains firmly buried in her former garden.

Frantically, I began to search for a similar (yet workable) statue. I wandered from room to room. I found a few unsuitable candidates. Mr. Pipe Smoker was too relaxed and didn’t appear to have the necessary work ethic. Mr. Dog Holder lacked positive energy. Suddenly, my eyes fell upon Mr. Hiker!  This little carved fellow has been living unhappily indoors for many years. As soon as I caught sight of his walking stick, his knapsack, and his jaunty hat, I knew I’d found my man. I snatched him from the shelf and hurried outdoors. I began to dig up the soil – but slowly realized that Mr. Hiker was not going to enjoy being buried upside down, 12 inches below the surface of the earth. 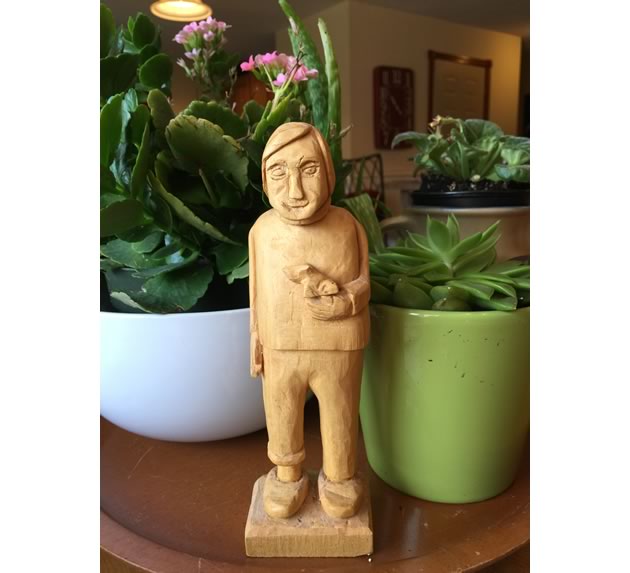 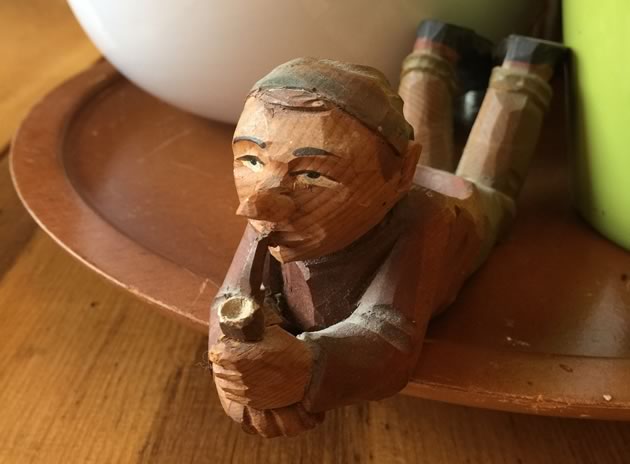 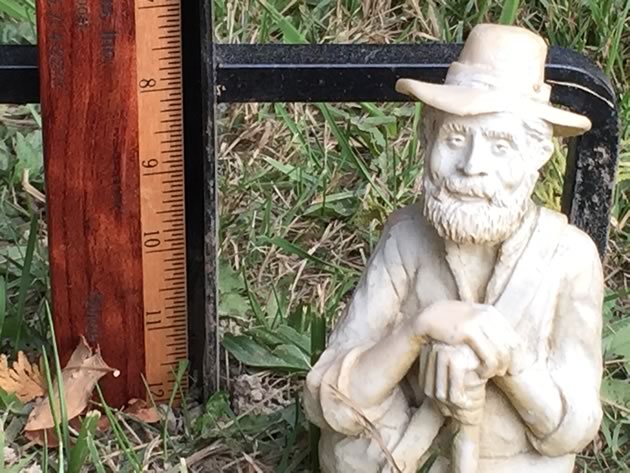 <
►
>
Mr. Hiker! As soon as I caught sight of his walking stick, his knapsack, and his jaunty hat, I knew I’d found my man.

And so, my little good-luck charm remains standing tall (all six inches of him) and proud, beckoning buyers to our home.

After all, it’s all about positive thinking, isn’t it?

Laurie teaches Grade 4 at Island Lake Public School in Orangeville and writes in her spare time. She lives in Mono and looks for the humour in everyday country life. Check out her blog “Two Blue Boots”.
Show 8 Comments