An excerpt from The Village and I: Ten Life Stories

At 30 years old, Maurice joined the federal fire department on CFB Borden in Angus for the good work and steady money it offered. Portrait by Peter Mitchell.

Before the Great Depression, when nothing was worth anything and work was scarce as wolves, Maurice Weatherall’s father, Harold, got a hundred acres west of Avening from the government when he and his English bride, Reta, returned from the First World War. He also got a new stomach at the Collingwood hospital to replace the one he had, which was ruined as a result of being gassed. The new stomach was sheep’s and, according to his son, it worked fine for the rest of Harold’s long life, the only thing being he couldn’t eat too much at once, so Harold kept a sandwich in his pocket when he went out.

For the next quarter century, Harold scraped together $11 a year to give to the bank for the land. “In the hungry thirties it was hard to find $11,” says his son, 88-year-old Maurice, from his kitchen table in Avening where he has lived for almost 60 years. “Lots of people lost a lot of stuff.” But up on the farm, the Weatheralls did okay. “We were never hungry,” Maurice recollects. For starters, there were sheep, cattle, horses, ducks, geese, turkeys, hens, cherry trees, apples, berries, pigs – and five children. A 30-foot well with a strong pump for pulling water, good and cold. They killed their own pigs and cows, salting the meat when the weather was warm and hanging it from the barn beams in winter. To keep milk from souring, they stored it in a cellar beneath the house. They made ice cream and Reta made many of their clothes. No running water and no telephone but a wooden walking boy one of Maurice’s uncles made for him to play with and a toboggan for coasting outside. As Maurice says now, “You made things do.”

Weatheralls have been making things do in this land for a long time. So long, in fact, that Maurice can’t recall them having any other. But according to family lore, Yorkshire-born James Weatherall saved some money in England and came to the New Country in the early 1800s to spend it. By the time Harold was born on a Creemore dairy farm near the end of that century, the Weatherall name had taken root.

Maurice came into the world one fine June day in 1927 after Reta had finished the plowing. She put him in a pan, which she set on the oven door to warm, because at four pounds he was small. As a boy, Maurice brought the silver foxes he caught in Dunedin to the Creemore barber to be skinned. A hunter and fisherman who’s been swinging a .22 since he was 12, he sold them for 85 bucks a pelt. Two years ago, he set up a raccoon trap on the veranda of his house and woke up to find a grey lynx inside. So, he went out in his nightshirt and propped the trap door open so the angry animal could back out. “I’ve never been afraid of any animal,” Maurice says.

Maurice came of age when Wasaga Beach was in its full glory, when you’d get all your friends together and drive up there, kids flapping off the sides of cars like laundry on a line. When you could dance till the sun climbed back into the sky and the cup you left behind would be sniffed by cops hunting for moonshine. Police officers circling the parties like sharks, digging up the sand beneath the kids’ cars and walking into the water searching for contraband. One-armed Jack Barker ran the ice hut at the beach, but he could give you a little extra something in your mug. “You didn’t want too much of it or it would turn your toes up,” warns Maurice. “Friday or Saturday night – look out!”

Now six foot two – having come quite a way since his birth weight – Maurice worked as a bouncer at local dances. He broke up fights and checked the ladies’ toilets to make sure no hooligans trapped the girls inside. “Girls at one time used to wear a lot of nylon blouses,” he remembers. “You’d get guys dancing and smoking and they’d just go ‘foof’!” A country boy except for that one winter he tried out Toronto to get warm, fleeing straight back to the farm as soon as the spring sun shone bright.

Maurice met Gertie Martin, his Sunnidale-born “tiny, strong” wife, on a blind date her sister arranged. They went out for seven years before marrying on the farm. Two kids later, they’d moved to Avening, a chopping mill village with a leather store, a blacksmith shop and a 10-room hotel that took in visitors before Creemore became the destination. In those days, it cost 10 cents a night to have the lights on in your home. Maurice can still picture the teams of sleighs setting up cream cans to use for making cheese at the factory near his house. Carrying bananas, sugar and salt blocks into Harry Green’s store from the train. A centennial parade in 1960, with a dark, leggy dog turning a butter churn. 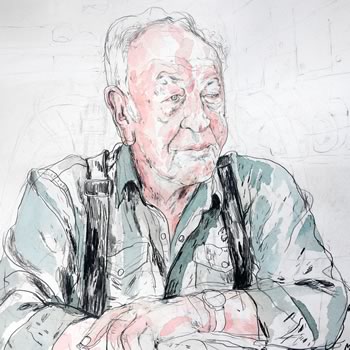 At 30 years old, Maurice joined the federal fire department on CFB Borden in Angus for the good work and steady money it offered. Portrait by Peter Mitchell.

At 30 years old, Maurice joined the federal fire department on CFB Borden in Angus for the good work and steady money it offered. There, he found camaraderie throughout adrenaline-infused shifts, long hours punctuated by the urgent call of fire. Huge fires in Alliston and on Barrie’s main street. Fires that burned trucks clean. Back then you had to shave your face three times a day because smoke could leak into your mask with the hint of a whisker. Panic and hysteria surrounded by flames and children pulled from attics ablaze. The miraculous discovery of a baby in a burnt crib – alive – shielded by a bed soaked in urine.

In spite of the highs, “none of it was good because in a fire you lost everything,” Maurice explains. The “good but tough life” came with a price and there are many things he doesn’t want to remember. Water that froze from the hose in mid-flight and the absurd blackness of entering a building in flames. Finding body parts after explosions that turned cement buildings into flour. Two kids he picked out of a river where they drowned. Over the years, various injuries led to hospital stays and being “chopped up and down” on the back, stomach, shoulders and face. But of the physical damage, Maurice says, “You always get better.” It’s the mental scars that do not so easily heal. To this day, he still has fire on the brain, is jolted from bed by dreams in the night. Even so, he says he loved the work, and would do it all over again.

To Maurice, retirement 20 years later – after a 60-foot slip from a ladder left him with plates in his back – was no sign it was time to relax. Once in shape after the accident, he turned to his ancestral roots, farming 1,500 pigs up on the hill. And although the pigs kept him busy, he found their communication skills lacking and he missed working with the guys at the fire hall, where “there was always something going on,” he says.

These days, what’s going on is the “bit of garden” (about 40 x 40 feet) he’s protecting from rabbits in the backyard. For the last 18 years, since Gertie passed away, Maurice has cooked and cleaned for himself, having given away the dishwasher (preferring to scald his own china instead). There are raspberries and strawberries year-round from the freezer, and lots of potatoes and meat. (“If you want something else, dig it yourself!”) The sound of the side door flapping announces the steady flow of visitors, including his two daughters, Heather and Maureen. Last Easter, 25 people joined him for a meal. Only recently did he stop baking his own bread – one of the few things he has forgotten how to do.

To Angus for groceries and Stayner for haircuts, and when the weather’s nice you’ll see him out on his bicycle rolling around town. There are berries to pick when his legs allow it, lawn mowers to repair and knives in need of sharpening. A social calendar dotted with beef dinners, strawberry suppers and euchre at the Legion on Monday nights. And every morning at 6 a.m., he climbs into his Ford 150 and has coffee at the Shell station with his friends. “I have a lot of fun and a lot of laughs,” Maurice smiles. “I’m always doing something. If I were to quit and sit down and do nothing, I don’t know how long I would last.”

Stories of our elders 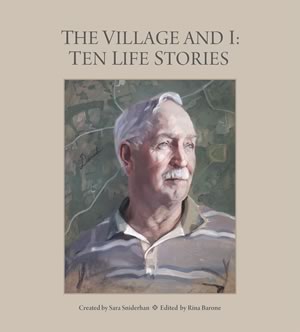 The Village and I: Ten Life Stories The collection features profiles and portraits of ten elder storytellers by nine local writers and nine artists, including Sniderhan, whose portrait of butcher Neil Metheral is featured on the cover.

Making friends and meeting neighbours after moving to a new town can be daunting – and hugely rewarding. For newly-settled Creemore portrait artist Sara Sniderhan, forging these ties also led to the creation of a book celebrating her adopted community.

After meeting octogenarian Norma Johnston and listening intently to her tales about life in the country, Sniderhan says she began daydreaming about a project to make a permanent record of the older generation’s take on their place in history, both local and personal.

The result is a limited edition book Sniderhan produced called The Village and I: Ten Life Stories (Curiosity House Books). Edited by Rina Barone of Curiosity House Books, the collection features profiles and portraits of ten elder storytellers by nine local writers and nine artists, including Sniderhan, whose portrait of butcher Neil Metheral is featured on the cover.

“It was such an unbelievable treat to be seated at kitchen tables and chat with these folks,” Sniderhan writes in the book’s introduction, adding that she could have included triple the number of fascinating characters. The project was supported by the Kemp Foundation, Purple Hills Arts & Heritage Society, and The Creemore Echo.

The book’s official debut is September 19 at Avening Hall in Mulmur at 7 p.m. There will be an exhibit of the book’s portraits at Creemore’s historic log cabin during the village’s Festival of the Arts (part of the Clearview Small Halls Festival), October 3 and 4.

About the Author More by Kristi Green

Kristi Green is a freelance writer who lives in Mulmur.
Show 1 Comment