Playing from the Heart

On a dark, damp November Saturday night, the Golden Country Classics Band sets up in our cleared-out dining room, indulging in a quick beer before the first set. Guests begin streaming in – neighbours, a handful of work colleagues, as well as sundry friends from our distant previous life in Toronto. The barrel-chested band members, wearing white shirts, bolo ties and black cowboy hats, take their places. Our eclectic crowd looks on with quiet curiosity.

“Let’s get this music started!” calls out my husband Tim, introducing the group. And boy, do they.

At the keyboard, Rod Salisbury gives the nod and Sam Leitch leans in to begin a rousing rendition of the deep South fiddle classic “Boil ’Em Cabbage Down.” In the audience, heads start bobbing, smiles spread across faces, and before three songs are over, a downtown commercial real estate broker has locked elbows with a local primary school teacher, then onto my neighbour, a religion blogger.

It’s the first time many here have ever listened to “old-time” fiddle music, which bandleader Rod describes as “toe-tapping and life-lifting.” That’s for sure, but this band’s deep love of these country and folk standards, some more than a century old, seems to channel our region’s rural roots in a way that resonates with just about everyone.

Rod, the youngster of the group at 47, played a big role in the band’s coming together. After learning to play the fiddle in 1994, he was eager to perform and suggested a monthly fundraising jamboree for the agricultural society in Caledon East. He pulled together some local musicians, including drummer Brian Stevenson, who is still with the band today. Jamboree patrons danced, and some joined in with the playing and singing.

In what has become an annual tradition, the Golden Country Classics Band performed this year at the Erin Fall Fair on Thanksgiving weekend. Photo by Rosemary Hasner / Black Dog Creative Arts.

Two years later, Rod approached Errol Henry at the Alton Legion about running a regular jamboree there too. With Brian on drums, and Boyd and Wilma Dolson as backup, this monthly jam-singsong filled the Queen Street hall for 11 years. A few years later Rod also started a jamboree at the Erin Legion. It flourished until a couple of years ago. It was at these jamborees the future band members were first united through their love of the music.

In 2007 the Golden Country Classics Band finally gelled at the request of Rod’s friend, the late Tom Neelands, a local guitar player and frequent jamboree patron. Tom wanted to form a band to play on Sam Leitch’s Main Street front lawn during the Erin Fall Fair. The resulting quintet has been a fixture of the fair ever since. Over the years they’ve also played Hart House (the farm in Caledon), Massie Hall (up near Chatsworth), off Broadway (in Orangeville), and in countless other town and Legion halls, living rooms and barns across Headwaters.

“I’d rather have the fiddling of Rod’s band than Itzhak Perlman [world-renowned violin virtuoso],” says Caledon resident and former Ontario premier David Peterson, whose farm has hosted several musical events with the Golden Country Classics. “They come like family, shoot the breeze, have dinner. And they include anyone who comes along and thinks they can sing. It’s always just a good old-fashioned family singsong.” 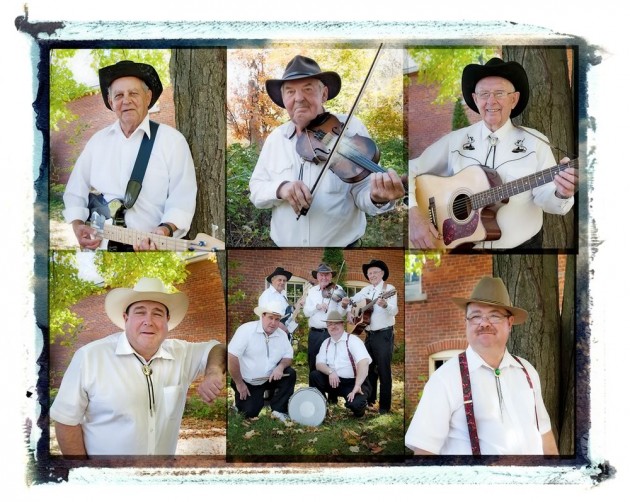 The band’s bond with their music is appropriately homegrown. Rod, self-taught on the fiddle and keyboards as a young man, says his love of music came from both sides of his family. Gathering with instruments at house parties was a regular feature of his youth. Old-time fiddle-playing legends such as Don Messer and Graham Townsend, as well as local musicians Boyd and Wilma Dolson, and fellow band member Sam Leitch served as his inspiration.

The band’s rhythm guitarist, 77- year-old Wib Tupling of Inglewood, experienced a similar childhood near Honeywood. He remembers playing in the background as a boy at Sunday socials with celebrated country musician and guitar player Joe Firth from Shelburne. And over his career, 57-year-old Brian Stevenson of Alliston played with an orchestra at Bond Head Hall, at Sunnidale Corners Hall near Stayner, and with revered fiddler Graham Townsend.

Rhythm guitarist and band co-founder Tom Neelands, who died recently at 60, was another homegrown talent from an old Caledon East farm family. And 80-year-old Lionel Gidney, who has just completed his first year as the group’s bassist, is also from Caledon East.

Of their self-taught style, Rod remarks, “No sheet music required. If the lights go out, we just keep finding our way – and believe me, that has happened.” His signature broad belly laugh follows.

Fabulous fiddler Sam Leitch, 77, of Erin (yes, the same Sam Leitch who may have fixed your furnace), came the closest to hitting the big time. His father was also a fiddle player, and Sam grew up in the heyday of the genre. “I remember as a boy going to house parties with the music going all night and coming home at 4 a.m. freezing your you-know-whats off,” he says. “But my dad wouldn’t let me touch his fiddle. He was afraid I’d drop it.”

Sam bought his first Gibson guitar as a young man and only learned to play fiddle after he was married. It seems he’s made up for lost time.

The late Stompin’ Tom Connors, who lived south of Erin, knew Sam as his furnace technician for 30 years. In 1990, Tom and his wife Lena walked into the beer tent at the Erin Fall Fair to find Sam centre stage on the fiddle. “Lord thunderin’ Jesus!” Tom exclaimed later. “You never told me that you could play the fiddle.”

Sam went on to record two albums with Tom and toured with him in 1991. Rod remembers seeing Sam play with the Canadian music icon at Lulu’s in Waterloo, a thousand people in the crowd. “You wanted to dance, but it was just too packed to move,” says Rod. He then holds up a battered Stompin’ Tom LP featuring Sam playing the epic fiddle classic “St. Anne’s Reel” and declares, “I remember the day my mother picked this up at Canadian Tire.”

On a warm July evening, Rod, Wib and Sam pull up chairs, as they have countless times before, around the table in the shop behind the house where Rod and his wife Sheila live on Mississauga Road in Caledon. Rod’s famed potato patch just outside the open garage-style door is thriving. They’re here to talk music, but as the cold beer flows, the conversation wanders to tales of farm life.

Rod describes chasing after a neighbour’s Charolais calf in a blinding blizzard. “You should have seen him clear that five-foot fence. Just like Bambi.” It’s impossible not to share Rod’s joy in his own storytelling. “Six weeks on the loose, he’d gone wild. We found him near Pitfields’ [on Winston Churchill Boulevard near Rockside], and the vet put three tranquilizers in him with a blowgun, but I said he’d need five. If he woke up on my front-end loader, he’d disappear into that storm for sure.” The gales of laughter continue.

More stories follow – about Rod’s father digging for gold in a cave on the MacDonald farm near Rockside; about Brian’s grandparents once travelling four hours by sleigh from Coulterville to play at a dance in Horning’s Mills, the fiddle wrapped in a blanket the whole way. Wib shares a childhood recollection of the night electricity first came to Honeywood – how he marvelled at the lit-up village as he walked home after a day picking potatoes. Sam describes how he learned the dying art of yodelling as a boy, calling the cows into the barn at night.

The group feels their rural roots are key to their success and longevity. “We’re all pretty easygoing, probably because we’re all farmers at heart. There’s just something about farm kids,” reflects Rod.

Sam adds, “And you know the bigger the load on the manure spreader, the better it is.” More laughter ensues. Then Rod insists that we settle down and listen to the Hank Williams tune playing on his turntable. It’s “Your Cheatin’ Heart.”

“But seriously, these old country songs are all about the story,” Rod says wistfully, and he is a man who knows the power of a compelling tale. “Now take a song like Kitty Wells’ ‘Making Believe.’ It comes straight from the heart,” he says, breaking into a couple of lines from its plaintive chorus, then confessing he probably sings it better when he feels a little low.

By midnight that cold November Saturday at our place, the Golden Country Classics Band is nearing the end of their playlist, including Charlie Walker’s hit “Pick Me Up On Your Way Down,” the traditional “Backup and Push,” Wilf Carter’s “Gooseberry Pie” and Hank Williams’ “My Son Calls Another Man Daddy” and “Hey, Good Lookin’” – some of the best country yarns ever set to music.

There’s no room left on the dance floor. And as the crowd chants for more, it seems the local tradition of a cowboy-hat-wearing, fiddle-playing country house party is, for now, alive and well – in all its toe-tapping, life-lifting glory.

The Golden Country Classics Band from Mick Partlett on Vimeo.

Short companion documentary for ‘In The Hills Magazine’ article featuring the group.