A Mono farmhouse was loved, nearly lost, then loved again. 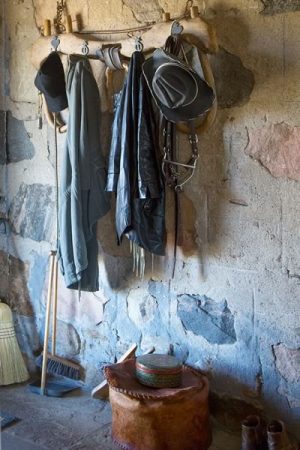 The original stone wall is a rugged backdrop to outdoor wear. Photo by Pam Purves.

This is a story about a stone house in Mono that has always attracted people with a slightly different way of thinking and somewhat unconventional lives. Current owners Frank and Barbara fit the mold.

The story begins with the Brinkman family in 1889. We don’t know a lot about them, but we know a little about their son Josh. He was among many Canadians who took in one of more than 100,000 mostly poor and occasionally orphaned children sent to this country from the U.K. between the mid-19th and mid-20th centuries. Known as Home Children, they were sent here on the premise they would receive an education and a healthier life. The child Josh took in, George Collins, came from one of the Barnardo Homes, founded by Irishman Dr. Thomas Barnardo, the most famous proponent of the child emigration movement.

The majority of Home Children were settled with farm families to provide domestic help and farm labour, and many of their stories were unhappy ones. However, although Josh undoubtedly needed help on the farm, he seems to have raised and educated George with real affection and in time became the beloved grandfather to George’s family. They all lived together in the Mono farmhouse until Josh passed away.

While researching the history of the house, Barb learned that two of George Collins’ children still live in the area. Barb talked to his daughter, now in her late 80s, who remembered from childhood how Aboriginal people camped nearby and her mother became friendly with them. When the daughter was born, they brought a woven basket for her to sleep in. She remembers there was no running water or electricity when she grew up, and she had to dress beside the woodstove in the winter. Toilet facilities were in a chilly two-hole outhouse.

Through a few more owners, the house remained primitive. It was never insulated or modernized. Bathrooms were not added. The kitchen remained without water and the only appliance was the original woodstove. It is thought a later owner – a professor of Medieval studies – kept conditions rustic to give his children a taste of life in the Middle Ages.

The current owners were looking for a country place that would be handy to both their home in the city and to Frank’s family in Collingwood. A friend stumbled onto the house when riding and told Barb about it. That was in 1991 – by then the house had been abandoned for at least 25 years.

Frank and Barb discovered the beautiful old structure had been considered important enough to be included in the 1977 book Old Ontario Houses by Kim Ondaatje and Lois Mackenzie. The authors described it as an example of simplified farm Italianate. 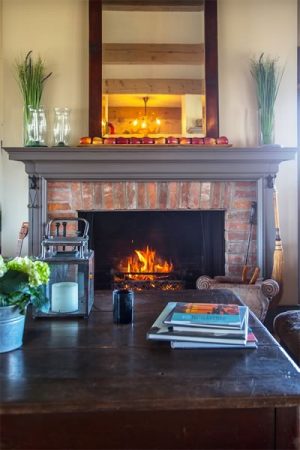 The fireplace is the focal point for gatherings in the new addition. Photo by Pam Purves.

The house was built of local fieldstone with a mortar of cement, moss and horsehair. It is probable the mortar prevented the house from falling down because by the time it was “discovered,” the roof leaked, the floors were a mess, windows were broken, raccoons had moved in along with mice, snakes and squirrels, and scrub trees had grown up against the walls. Kids were using it as a hangout. On one of Barb and Frank’s early visits, they found fresh ashes in the fireplace and mattresses scattered on the floor. Unwelcoming language was sprayed on the walls.

It looked like a “sinkhole for money,” recalls Frank. Nevertheless, a city girl and a small town boy compromised and, with the assurance of their contractor Don Doucette of Tottenham that the structure was basically sound, they bought it. The fact that Frank had given Barb a horse for her 50th birthday, and it needed a home, sealed the deal.

The property itself is spectacular. On a clear day you can see the CN Tower. In-between are forests and rolling hills. It is a glorious sight that no doubt helped them see past the daunting task of restoration.

So began nearly two years of work. A basement was dug by hand – dirt removed on a conveyor belt through a window. In went a furnace, hot water tank, plumbing, electricity and in-floor radiant heating. Up went a new roof. The former two-hole privy had previously migrated to a large workshop addition the professor had built onto the back of the house. The workshop was constructed with such craftsmanship, using no nails, that it was able to be lifted whole by a crane and moved to a new cement pad to serve as a farm implement shed and tack room.

The four upstairs bedrooms became two, each with its own bathroom. The kitchen became a real kitchen. The former parlour and small birthing room became a new sitting room and a TV room. Barb scrubbed and refinished the floors herself. Finally, a large living/dining area and screened porch were added where the workshop had been.

The addition connected the house into a corner of one of the home’s most alluring outdoor features – an expansive 45- by 55-foot walled garden the professor had built, apparently inspired by enclosed Medieval gardens. Barb and Frank installed a charming European-style garden within its walls. Paddocks and a loafing shed were built for Barb’s quarter horse Flash – who is now 30 years old. 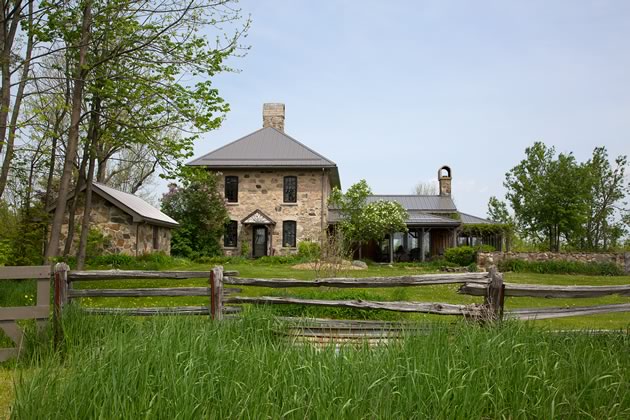 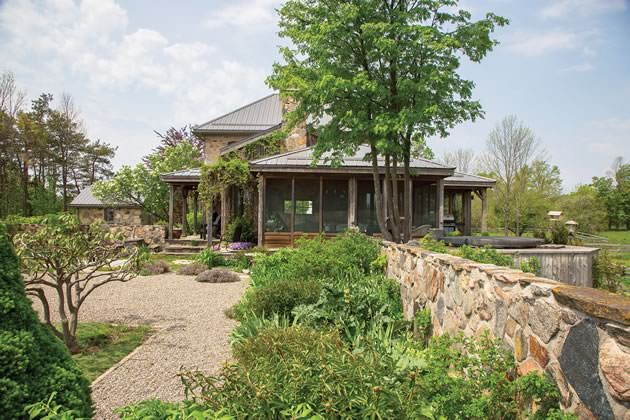 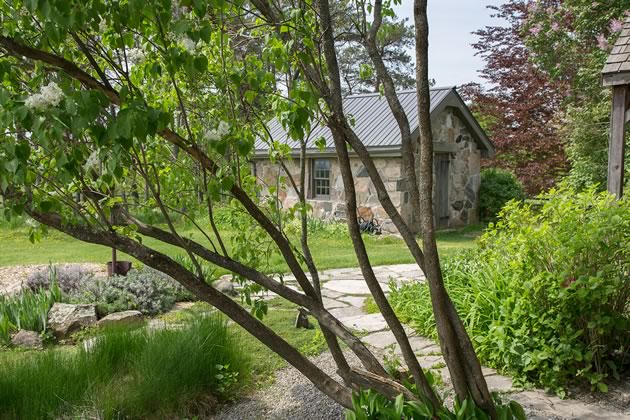 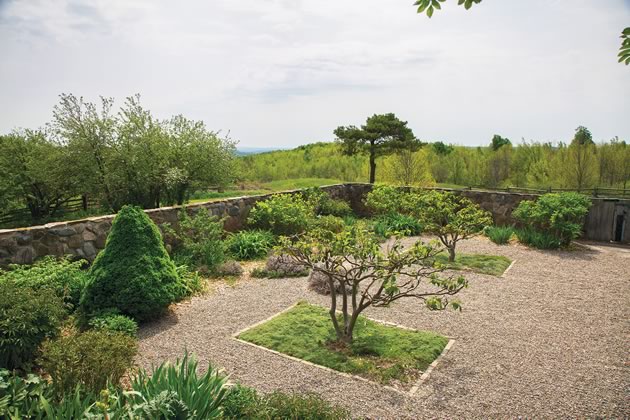 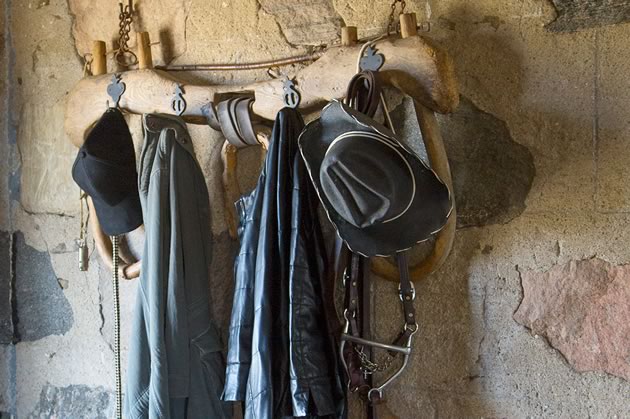 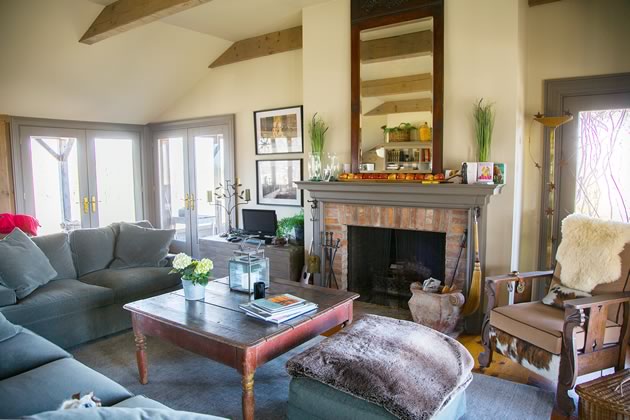 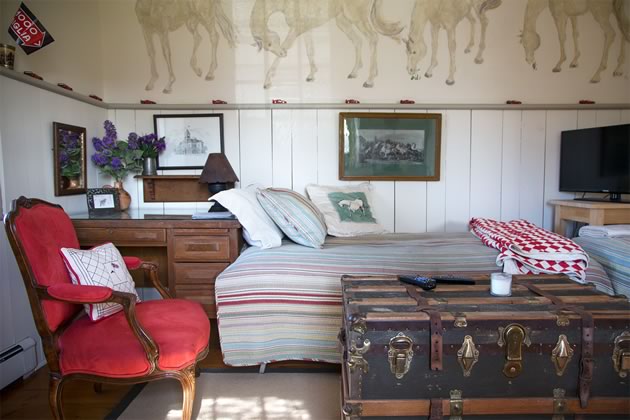 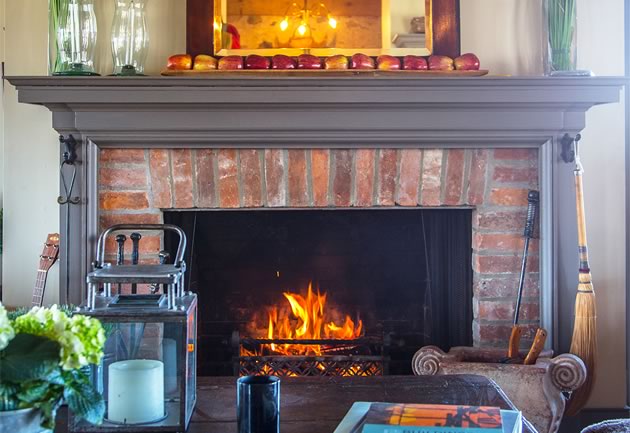 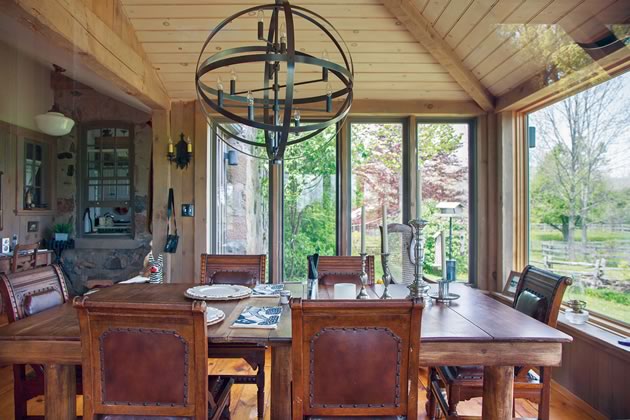 <
►
>
The addition cuts into a corner of the large walled garden which came with the property and where the owners have installed formal, European-style plantings. Photo by Pam Purves.

Barb, who doesn’t mind being called a “scavenger with a good eye,” saved everything she could from the old house. A bed, a cupboard, a table and other odds and ends were cleaned and painted. The woodstove remains in place.

Barb says she loves the “Zen” of being in the house: “The horse, dog and cat all together in the beautiful silence.” As for Frank, he loves the rolling land and seclusion: “We’re in the middle of nowhere. Clearing trails for Flash and just nature-loving keep me busy.”