Cooking with Pam Fanjoy of The Friendly Chef Adventures 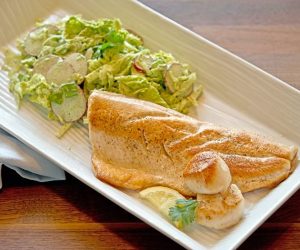 Pam Fanjoy is rushing around her small food shop and restaurant, The Friendly Chef Adventures, gathering ingredients for a dish she’s sharing with this magazine. She’s chatting all the while. “Which cabbage is fresher? Where are the limes? Take a look at these scallops!”

Still, her activity is positively leisurely considering her usual pace. In the last few months, on top of running this Erin business with work and life partner Carmenza Angel (“People call us ‘the girls on Main Street,’” she says), Pam has been promoting her “Tall Chef Tall Order” campaign, for which the chef (who is six feet tall) presold meals, fresh foods and catering gigs to crowdfund a down payment on a new, larger location she opened this spring.

In the midst of working seven days a week to fill the more than $10,000-worth of pledges that rolled in, Pam was also tapped to be a contestant on the Food Network show Chopped Canada. She bested three other contestants and won $10,000. (The episode aired in February.) Pam added the winnings to her TCTO funds and in late April announced she had made a down payment on a spot in nearby Hillsburgh, at 100 Trafalgar Road North.

“I’ve had a crazy year, a challenging year,” says Pam with a radiant smile. “A fresh start will be amazing for us.”

The ride has reinforced the career path she chose about a decade ago after a successful career as a clinical social worker (she still maintains a small private practice) and has fortified her belief in the power of food to boost social bonds and build healthy communities. The customers and friends who supported her now have a personal stake in her future.

“The campaign has opened doors for me to build relationships with people who understand me as a chef and a female entrepreneur,” she says.

Another way to understand Pam? This dish, built on the “Deliciousness Slaw” which helped her ace the Chopped Canada audition. With crunchy cabbage, daikon and red radishes, and a hit of curry, it’s an encapsulation of her drive to marry international inspiration with local sources. Here, for instance, the daikon comes from Everdale organic farm near Hillsburgh.

Pam suggests serving the slaw with Ontario steelhead (rainbow) trout. (Because it wasn’t quite in season when she cooked up the dish for us, Pam substituted Arctic char). She became fascinated with steelhead trout after hearing about how members of the Credit River Anglers Association manually lift the trout through the Norval Fish Ladder on their way to the Upper Credit River each spring.

Watch for it on the menu at Pam’s new location, where there will be about 40 seats, along with a selection of takeaway foods, cooking classes and CSA-style meat, fish and cheese clubs. It all may seem like a tall order indeed, since Pam continues to accept requests to participate in new television opportunities and community events. But there is one caveat: Nothing can take her away from the stove for too long.

“Cooking gives me energy. It’s why I need to be in the kitchen.” 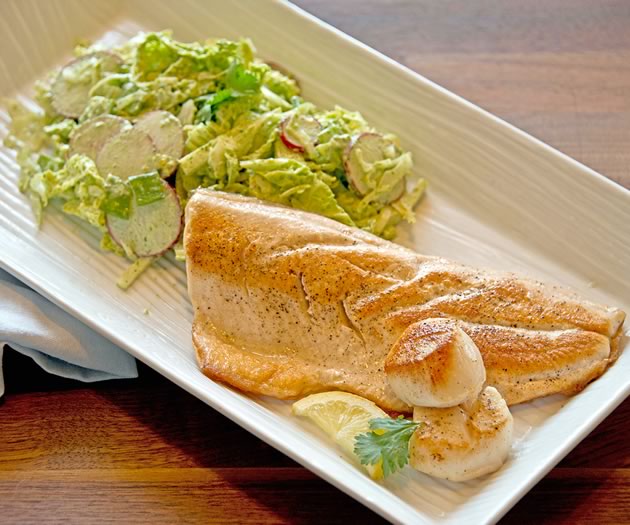 Try this dish, built on the “Deliciousness Slaw” which helped her ace the Chopped Canada audition.