Pretty much everybody referred to Jeff as Uncle Buck.

A sharp rap at the front door on an otherwise quiet night, just before 10 p.m., made the dog woof from her spot on the chair. There was my family friend from down the road, Stan, in his pyjamas, breathing heavily and pale as a ghost, leaning forward, hands on the doorframe to hold himself up. He could barely get any words out, and I thought he was having a heart attack on my doorstep – I knew he had very recently had major heart surgery. The cold wet air from outside washed over me.

“Come in, come in. What’s wrong, Stan? Do you need an ambulance? Where’s Annie?” The questions tumbled from my mouth as I tried to triage the situation. I pushed the dog back and she wagged hesitantly and woofed again under her breath. My son Adrian’s eyes looked like saucers. “Do we need to talk privately?” I asked Stan. Yes, he nodded. “Off to bed, Adrian,” I motioned.

We went to the kitchen of my tiny century bungalow nestled in the twinkly lights of Orangeville, shut the door and somehow he got out that my dad was going to be calling from Florida, that he had bad news and wanted someone to be with me when he called. We were gripping each other’s arms and I pleaded, “Just tell me, just tell me.” That’s when he told me my brother was dead.

When the phone rang, I managed to pick up. At first there was silence on the other end, but now I already knew. My parents had been contacted by the Harriston OPP, who had found my brother alone in his country house, on his couch, after he had missed work for several days. A friend had called the police to ask if someone could go check on him. Even though his friend didn’t know my brother’s address, she knew he rented it from Mennonites, enough information that in his small rural community the officer was able to find the house.

I talked to the same officer that night – he was very kind. And I spoke with a coroner who would be brought in to help determine the cause of my brother’s death.

My brother’s name was Jeffrey James Lee – the James Lee for my dad, and for his dad before him, and the name Adrian now carries as well. Jeff died just a few days short of his 48th birthday.

Everything was a blur. Telling my friends and colleagues, calling family and Jeff’s friends, meeting my parents in a quiet room at the airport when they arrived two days later. Meeting with a pastor. Answering what felt like a million emails, calls and texts. People bringing food to make sure we ate.

I didn’t tell Adrian that first morning. I needed to get my own words in order before I did, and I wanted to be able to spend time with him afterward. Jeff was his closest uncle. He was the wacky uncle who would talk about just about anything with Adrian, including world politics, fishing, technology, movies, camping, construction, the upcoming U.S. election … well, you get the idea.

My brother had some pretty passionate ideas about life, and that only made him more interesting to his nephew. In fact, my brother was much like the persona we imagined the late John Candy to be – full of outward humour, terrifically smart and witty, slightly off kilter, owning his pathos and determinedly doing things his own way. All my life, I have never watched SCTV, The Great Outdoors, or especially Uncle Buck, without thinking of my brother. In fact, pretty much everybody referred to Jeff as Uncle Buck.

When I told Adrian later that first full day, he screamed out in pain. He turned into the couch and beat the back and arms with his forearms. I was afraid he would hurt himself. I asked him to stop. At 11 years old he knew instantly this wasn’t a disappearing trick; he knew Jeff was gone and not coming back. For the rest of the day he was inconsolable and untouchable. My touch would burn him and bring him back to reality. I imagined that the blanket he rolled up into was a cloak he dreamed would make him invisible. I wished I could roll up with him and we would be transported to a time just one day before when the words hadn’t yet been spoken. Just one more day of not knowing. 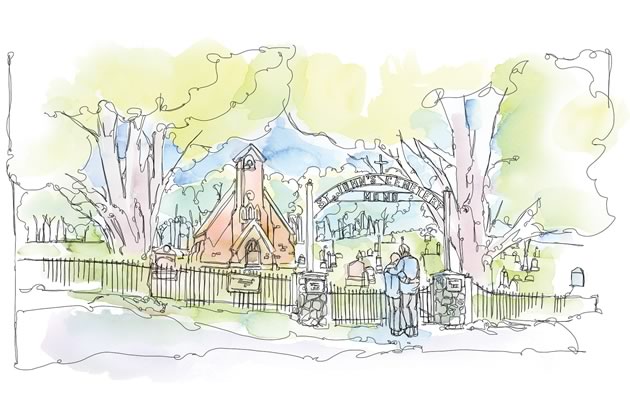 My brother’s ashes will be buried this summer in a tiny, pastoral cemetery on the 7th Line of Mono. If you drive by it, you will see two Lee pillars supporting the gate. Illustration by Shelagh Armstrong.

Since my brother’s death I have spent much time walking and finding solace in the hills. I walk the Island Lake trail as often as possible. We’re fundraising to build a memorial bench there in my brother’s memory. We had a true celebration of his life in the ballroom at the Best Western where we all laughed and cried together in one ocean of emotion, ebbing and flowing together, our stories parallel and washing over us. Adrian listened intently to every word, and I knew his healing was beginning as the room breathed in and out in sorrow and celebration together with him.

My brother’s ashes will be buried this summer in a tiny, pastoral cemetery on the 7th Line of Mono. If you drive by it, you will see two Lee pillars supporting the gate. My family is a part of this community and it helps us heal.

“Peas, if you carrot all, lettuce be friends!”

Are you up for a wander among some veggies, smoky meats, fresh bread and bakery treats? Live music and pets on parade? Then you must visit one of our area farmers’ markets this summer. I was surprised to see the listings this year – so many to explore! Kids are always intrigued and fresh air markets offer great learning – and snacking – opportunities.

The hills are bursting with all sorts of family activities for Canada Day on July 1. At Mill Street Park in Creemore the festivities start just after lunch and include a kids’ bike parade and fireworks at dusk. At Albion Hills Conservation Area things get underway at 4 p.m. – don’t miss the lumberjack show! – and also conclude with fireworks at dusk. My family’s favourite fireworks happen in Orangeville over Island Lake. Arrive early on foot or park in one of the store lots off Highway 10. Bring chairs and blankets, sit with friends and gaze up at a fabulous spectacle. There’s lots of daytime activities in the town too. Check orangeville.ca for details.

The Urban Slide! Kids throughout the hills somehow know that Broadway in Orangeville will be covered in a thousand-foot waterslide this Founders’ Day, July 23. You can get tickets and register online now – $10 for a single slide, $25 for a triple slide, $40 for an all-day pass ($150 for a family of four). In addition to the slide, the annual Founders’ Day shuts down the town’s streets for all kinds of vendors, buskers, music and free family fun. theurbanslide.ca

We’re crossing our fingers for…

Meghan Trainor! Votes are in, and last we looked Mulmur seemed headed to win the Air Miles Detour Contest. Votes were cast across Canada for one lucky community to win a once-in-a-lifetime live music performance by Grammy Award-winning singer-songwriter Meghan Trainor (“All About That Bass”). In the ’60s and ’70s, Mulmur welcomed tens of thousands each year for the Freak Out Festival, Canada’s answer to Woodstock. Fingers crossed we can now share this history with our kids and see this popular artist in the hills! Date and winner to be announced soon.

This is your chance to get up close and personal with pilots and their planes. Nestled in the southern end of Caledon is the Brampton Flight Centre, an active aerodrome and home to the Great War Flying Museum. For just $5 admission on September 11 from 10 a.m. to 4 p.m., you can participate in lots of activities for aviation enthusiasts and families at our local airport. It’s located at 13691 McLaughlin Road. bramptonflightcentre.com