Set in a fold of the Niagara Escarpment, in a wooded area with natural springs, sits a family property that has been appealing to the imagination of its owners for more than a hundred years.

Secluded in feeling, yet near a road that connects it to major urban centres, the rural property just south of Erin has been the ideal retreat for farmers, a military careerist, royalty and families. And to the delight of the current owners, who want to see it preserved into the future, the historical and cultural value of the property has recently been recognized under the Ontario Heritage Act.

There is a long history of inhabitation here. Digs on the neighbouring property in the 1960s revealed remains of food and tools, as well as pottery shards, suggesting an Iroquoian-speaking people existed nearby in ancient times. The most recent First Nation to live in the area was the Mississauga, an Anishinaabe people who, in 1818, surrendered to the British a huge tract that included this land. 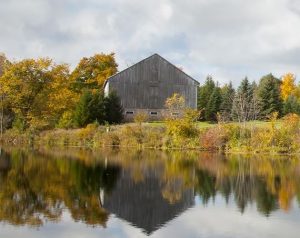 The current site includes two houses and several log cabins. In 1883, Frederick Near, a local farmer and stonemason who served as reeve of Esquesing Township, finished building the large stone house near the front gates. It is a lovely example of Ontario Gothic revival architecture. The large barn next door dates from the 1890s and, like the house, has been maintained in pristine condition.

In 1911, the property was sold to George Thomas Rogers, the son of a nearby farmer. Rogers is the one who transformed the land into what it is today. A man of vision, he led his brothers in a project to dam the creek – now called Rogers Creek – to fill a deep hole left by an earlier quarry. According to a local newspaper, his intention was to create a trout pond and a grand club with gracious grounds and cabins for visiting fishers. Though Rogers ultimately scaled back his resort ambitions, he operated the property as a private trout club.

In more recent memory, the property was owned by Brigadier General Frederick Campbell Wallace and his wife Vera Isobel. Well-known to those who ride to the hunt, Wallace was a businessman and a veteran of both world wars. During World War II, he commanded the anti-aircraft defences at Dunkirk in 1940, and shortly afterward he was part of the Tizard Mission, a top-secret operation that, among other things, led to advances in radar technology that helped the Allies win the war.

For Wallace, the property was a weekend retreat and a base for fox hunting with the Eglinton and Caledon Hunt. The groundskeeper lived in the stone house, while Wallace often spent weekends in one of the fishing cabins. Then, in 1963, he and Vera built a new single-storey home near the pond. There they hosted Queen Elizabeth during her Canadian tour in 1973. 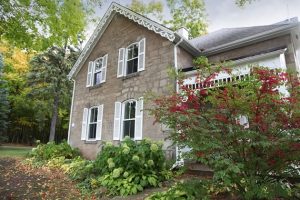 Intricate barge board graces the gable ends of the 1883 stone house. Photo by Pam Purves.

The property then passed through other hands and was sold to Tom and Sandra, the current owners, in 2003. A bungalow on a large pond in a protected area was ideal for this couple, who wanted a weekend retreat from their Oakville home and a place for their whole family to gather. The location, near Sandra’s parents’ home, also meant an easy drive between families.

The setting is stunning. Well-wooded, the property is transected by Rogers Creek and now has two large ponds, still well-stocked with trout and visiting bass. The view from the new house is idyllic.

The property includes distinctly different areas. One is situated next to the lower trout pond, shared with a neighbour. The log cabins and a simple wooden bridge over the creek have a rustic, low-key atmosphere, still ideal for a day of fishing. Looking west from the lower pond, there is another pond and a long lawn leading to a view of the barn and stone house. The adjoining woods are reflected in the stillness of the upper pond. With some of the original apple orchard still standing near the stone house, it is a perfect picture of 19th-century farm style.

Looking north, the newer house, which settles beautifully into the landscape, is visible at the stop of a rise. The house is reflected in the upper pond, and in the late afternoon and in the fall the whole vista glows gold.

When Tom and Sandra bought the property, this house was still much as it had been built and needed updating. And once the update started, it was difficult not to get carried away.

So the couple worked with design consultant Larry Benville to gut and reconfigure the interior. Windows were enlarged and French doors added to improve access to the view and to increase natural light. The roof pitch was raised, a cupola was set above the soaring foyer, and what had once been staff quarters – bedrooms, a kitchen and a butler’s pantry – as well as an adjacent sitting area were converted to a mud room, screened porch and an open-concept kitchen and family room. 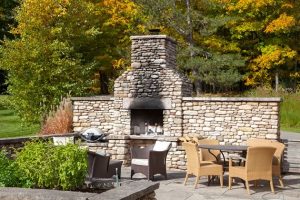 A substantial outdoor fireplace is built into the dry-stone wall that encloses a vegetable garden and outdoor dining area. Photo by Pam Purves.

Outdoors, the cladding was completely converted to cedar shake. And a dry-stone wall off the new kitchen encloses the raised beds of the family’s vegetable garden, as well as a patio and outdoor fireplace.

Asked why they didn’t simply raze the house and build new, Sandra explained that a teardown wasn’t in keeping with the family’s thinking about conservation and preservation. So the couple happily maintained the building’s original footprint.

The family is currently widely distributed, some in Germany and others in Calgary, and the property has become the clan’s preferred gathering place. Holidays see everyone canoeing, swimming, walking trails cut through the woods, and enjoying their place in the history of the property.

Because the property is now historically designated, Tom and Sandra have the great satisfaction of knowing time will not significantly change what is here. And they have the fond hope it will become the seat of successive generations of their family. 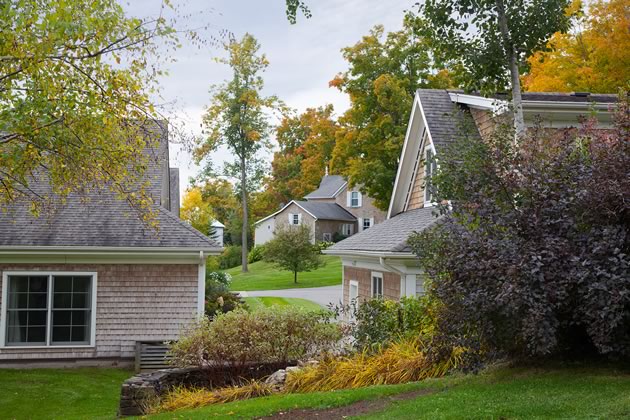 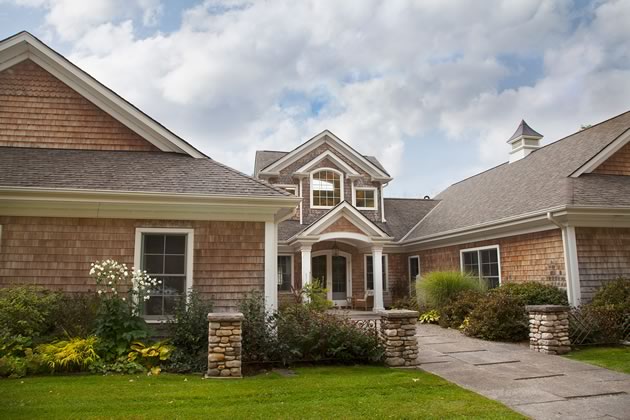 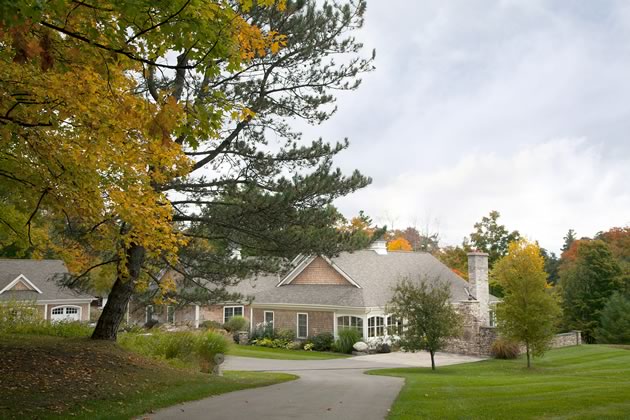 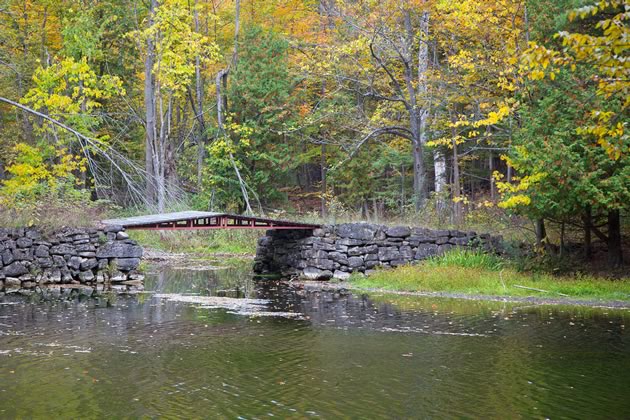 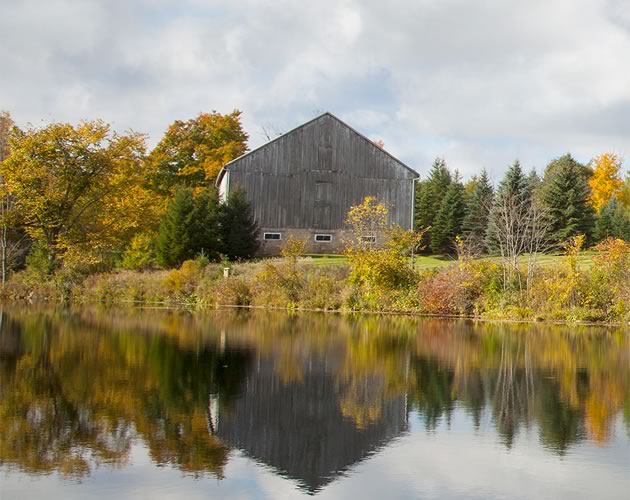 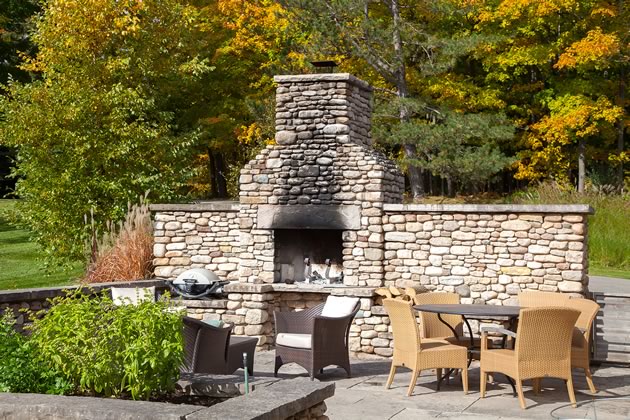 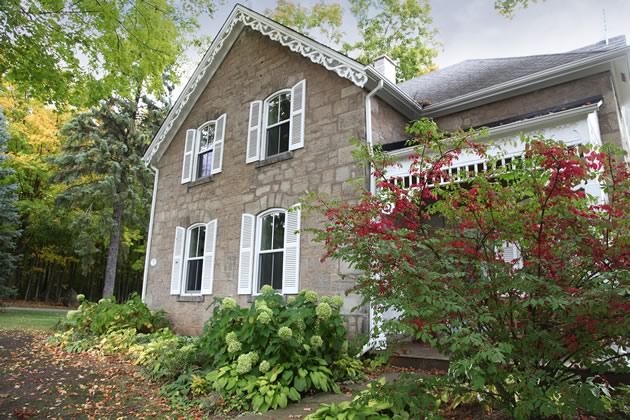 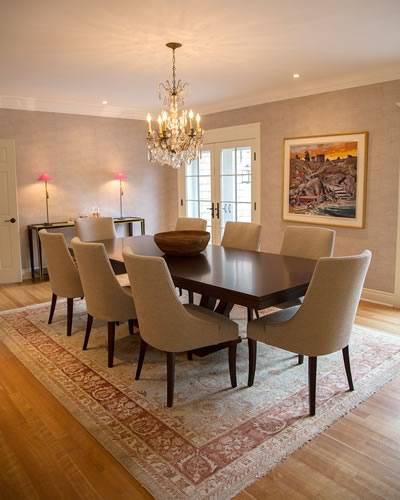 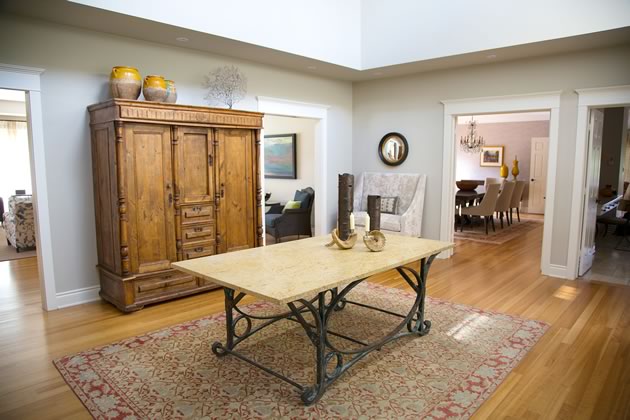 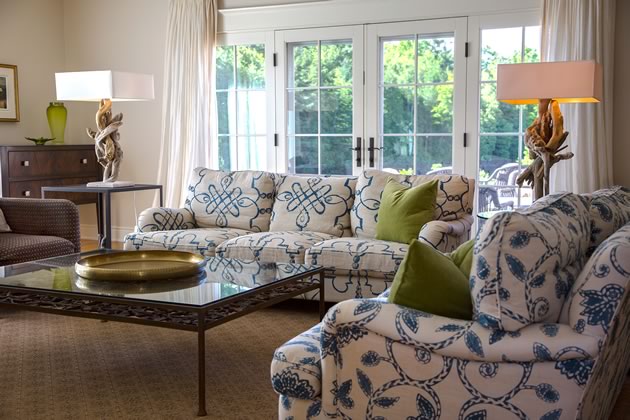 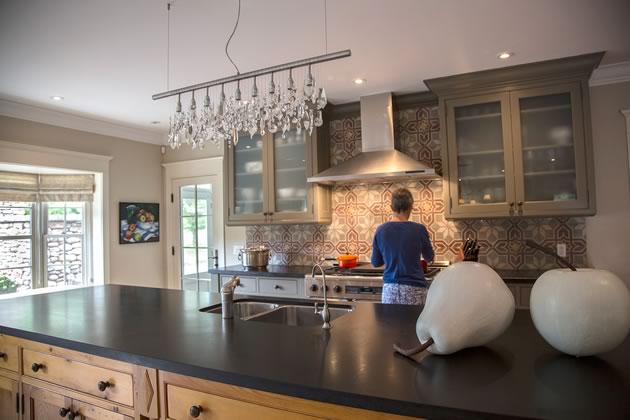 <
►
>
A substantial outdoor fireplace is built into the dry-stone wall that encloses a vegetable garden and outdoor dining area. Photo by Pam Purves.