History in the Making. For these furniture designers, style and story go hand in hand.

Far beneath the surface of the blue-grey waters of Georgian Bay and the lakes of Muskoka lies a trove of hidden treasure. Neither gold nor diamonds, nor shiny coins nor sparkling jewels, this treasure isn’t the stuff of fairy tales or X marks on weathered old maps.

It wasn’t stashed by criminals on the lam or swashbuckling pirates.

This treasure is wood.

More than a hundred years ago, lumberjacks took their axes to the bases of ancient trees, some of which had stood for more than a thousand years. Once felled, the trees were cut to specific lengths and stamped by mills. The logs were then loaded onto wagons and pulled by horses or oxen to nearby rivers. There they were rolled into the water and floated downstream, à la “Log Driver’s Waltz,” until they reached open water. Then they were gathered into huge booms and hauled to a mill.

While the method worked, it wasn’t entirely efficient – and many logs were lost, sinking to the bottom of the lakes. And that’s where they stayed for a century and a half. During that time, silt and minerals such as iron stained the wood, producing green and grey hues that shimmer just like the water that made them. Today these logs are coveted materials for furniture makers such as Jedson Smuck, president of Deep Water Wood.

“The wood is spectacular,” says Smuck. He estimates many of the logs – up to 20 per cent of a company’s haul – were the best of the bunch. They sank because they were denser and harder than the others. “The wood is different from anything you see today,” he says. 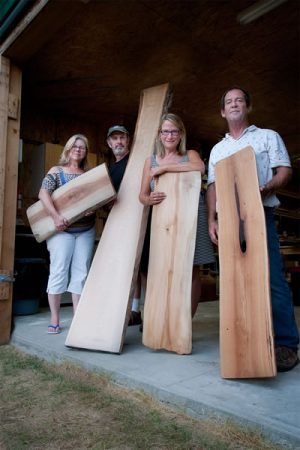 For customers of Deep Water Wood, which started in Rosemont 12 years ago, this singularity is key. Everything about the wood – from its storied past to its look and substance – is unique. Smuck says his clients are tired of “mass-produced, made-in-China” stuff. Instead, today’s buyers want to furnish their homes with something special, quality products that are local and handmade.

“People love the history and story of the wood,” explains Smuck. “Many of the logs still have their original stamps at the end intact. Sometimes we preserve history by cutting out the stamp and inlaying it into a table. It gives the object authenticity.”

At his workshop in Everett, master cabinetmaker Tony Dormer uses timber from Deep Water Wood to create remarkable looks for tabletops, office desks and wall units, among other things. Unlike mass-produced materials that scrimp on quality, he says, the salvaged wood “looks as good as it did on the day the trees were cut down.”

Dormer loves working with wood that acquires different hues when it’s covered in clear coat. “The wood is filled with surprises,” he explains. “It has colour and texture not found in contemporary wood.” And his customers love it too. “It’s a completely different look from what they’re used to.”

To get to the desired logs, Dianne Hoegler, Deep Water’s modern-day treasure hunter – aka head of marine exploration – hops into one of the company’s boats and uses side scan sonar to detect objects on the bottom. Once a log is retrieved, it is inspected, sorted and graded by species. Then it is hand-milled, and both air- and kiln-dried to prepare it for use.

Deep Water Wood’s story began when business and life partners Smuck and Hoegler noticed the excellent quality of wood they were finding submerged near their island on Georgian Bay. Two years ago they gave up jobs in telecommunications and occupational therapy respectively to pursue their passion full time. Today they own every part of the process, using the wood to make custom flooring and furniture such as tables that sell for between $1,500 and $6,000 apiece.

Success has come quickly – there are times their supply can’t keep up with demand. Though Deep Water has no retail outlet of its own, the company’s wares are available at stores throughout Headwaters. Look for their work this fall, for example, when you visit Adamo Estate Winery at Hockley Valley Resort.

“Deep Water preserves history through the marine rescue of treasures,” sums up Hoegler. Much of the wood they find, such as bird’s-eye maple, tiger maple and flame birch, is exceedingly rare today, she says. By using reclaimed wood to make their tables, butcher blocks and charcuterie boards, Deep Water Wood creates quality products while leaving the standing forest alone.

Explains Dormer, “I could go buy lumber from a commercial lumber supplier that sells cut slabs, but if I get it from old trees, then I reduce the number of live trees that need to be cut down.” Hoegler agrees, “This way, you don’t sacrifice forests for great pieces of furniture.” 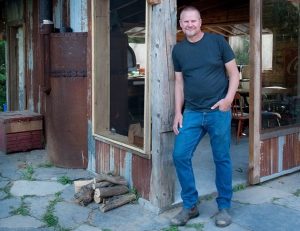 In 1963, when chicken farmer and furniture maker John Leenders was a boy, his father found a stack of 10 wooden planks on the family’s newly purchased farm in Palermo, near Oakville. Although they never used the wood, when they moved twice again, the wood went with them. Later, when Leenders started his own farm in Erin, he made sure he took along the old planks. Finally, after more than 50 years in storage, the time was right. On a warm day this past summer, the wood became part of a project on Leenders’ own house.

This process typifies Leenders’ approach to creating one-of-a-kind furniture pieces from found and forgotten objects and wood. For this craftsman, it all starts with the materials. Leenders credits his thrifty Dutch father with instilling his distaste for waste. As a result he has been known to create functional pieces of art from reclaimed wood, streetlights, army tents and chicken feeders. The area behind his barn – which he calls “the mall” – is filled with all sorts of items collected over the years. “Every object has a story to tell,” he says. “It’s just my job to bring it out.”

Using old materials enables Leenders to keep the past alive. If he finds an old logo on a piece of wood, for example, he does his best to learn more about the company. Recently he turned an old table saw into a kitchen island which prominently features the original Uxbridge manufacturer’s name.

Leenders likes that the wood he uses comes with its own history and character. “You can see where someone else has used it and worn off the paint,” he says. “That’s evidence of the past, like hoofmarks on a threshing-room floor.”

But working this way comes with challenges. Finding the right wood to use for each project can take a long time, he acknowledges. Large volumes of wood can be scarce unless a barn has been torn down. Even then Leenders must pick through the boards to find ones that match. And while new wood can be planed down to create consistent dimensions, reclaimed timber comes in all sizes. Resizing comes at the risk of losing what he calls “the funky, cool patina,” the reason for using the material in the first place. “You have to collect and collect and collect until hopefully you have enough to make it work.”

But for Leenders, the effort is worth it. That’s because he views his works as the heirlooms of the future rather than as disposable objects. The payoff is the timelessness they represent. His customers appear to agree; demand for his furniture has increased in the past five years – Dragon’s Den alumna Arlene Dickinson counts herself among his fans. His work can be viewed on his website and at the Noodle Gallery in the Alton Mill.

Instead of a trendy piece that will one day look dated, says Leenders, his customers “have a great piece of furniture that will never go out of style.”

Bringing back the old ways 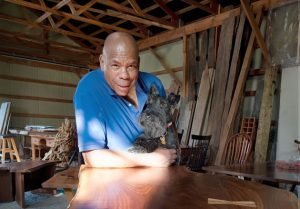 For Hailey Livingstone, owner of Snoopers Furniture in Hillsburgh, old is good. Old wood and old ways inform his approach to designing unique wood creations. For the last 30 years, he has used boards from derelict buildings as far away as northern Ontario to build harvest tables, headboards and other custom items. Known for his craftsmanship, Livingstone revives 19th-century furniture-building techniques, opting for dowels instead of nails and screws where he can.

He appreciates the fact that barn boards were thicker and wider then, and that the impression of old square nails can still be seen in the wood. “This wood has been in a barn for 100 to 150 years,” he says. “The wood has its own nice golden brown patina that you don’t get in wood today.”

But there is more to Livingstone’s work than meets the eye, says Snoopers sales representative Susan Graham. She believes the craftsman’s relationship to his materials is a spiritual one. By working with each piece of wood intentionally, Livingstone remains loyal to the unique features of the material. The grain of the wood guides shape, and features such as knots are celebrated. Many tables have “live edges” that follow the natural curve of the wood’s surface, rather than being planed straight.

According to Graham, the furniture’s “closeness” to nature creates the same soothing and peaceful effect that trees have in their original state. “Hailey doesn’t just look at a piece of wood, he looks at the spirit of the tree,” she explains. “Each tree has its own unique individuality and he enhances that. After all, the trees have a story to tell too.”

Livingstone is as intriguing as the furniture he so lovingly creates. His father was an Antiguan who studied cabinetmaking in England, and his mother was social activist and broadcaster Kathleen Livingstone, who in 1973 founded the organization now known as the Congress of Black Women of Canada. Whether travelling on his motorcycle with his friendly canine sidekick MacDuff, listed as part of the “creative team” on Snoopers’ website, or pondering the meaning of a piece of barn board, Livingstone takes his time. His philosophy of life is embedded in every piece of his work.

These days, Snoopers – named for the antique shops Livingstone operated at various times in Campbellville, Toronto and Oakville and where “snooping” was encouraged – sells harvest tables, kitchen islands, coffee tables and more out of his showroom and workshop or online.

Customers can visit Snoopers’ showroom and workshop to choose the wood for their creations, return again and again to acquire Livingstone’s “functional pieces of art.” These are pieces people keep for a lifetime and pass on to their children. “Once you get a piece like that, everything else looks like crap!” she laughs. “It grows – just like a forest.” 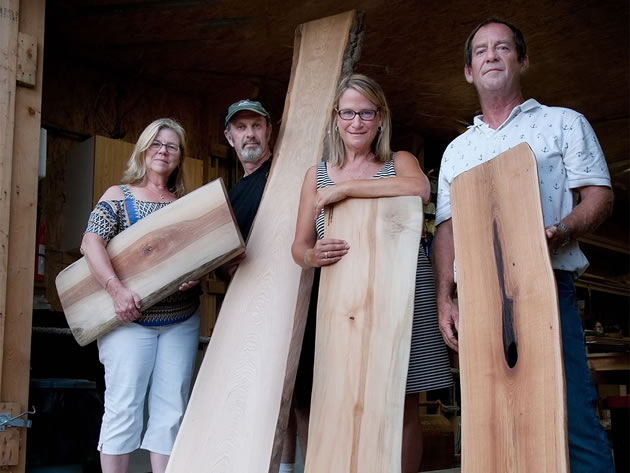 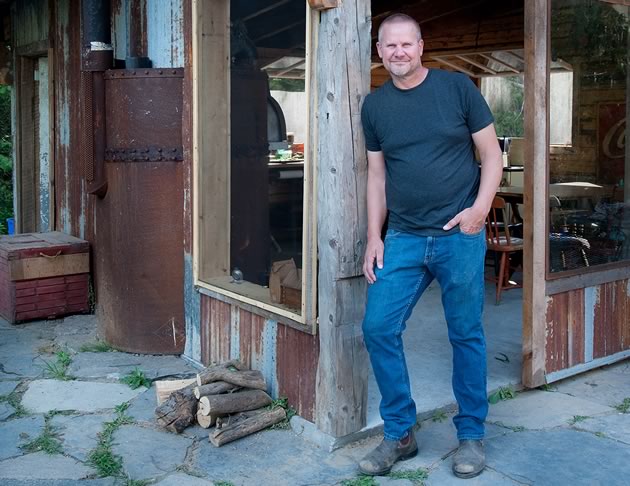 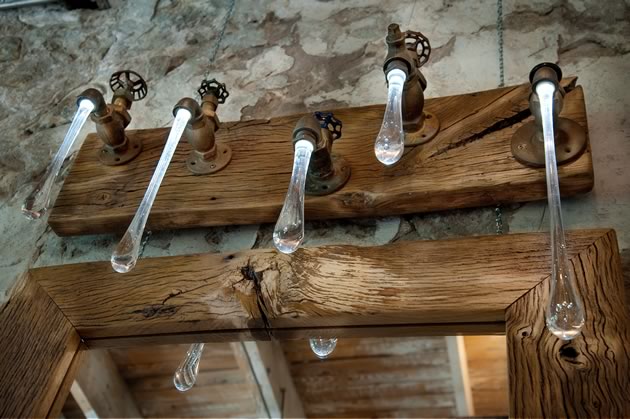 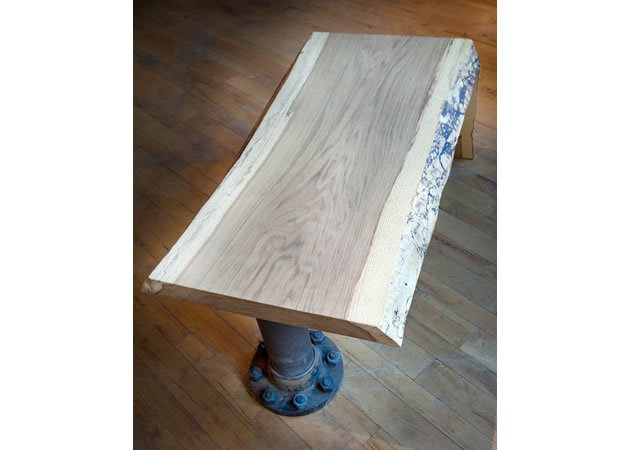 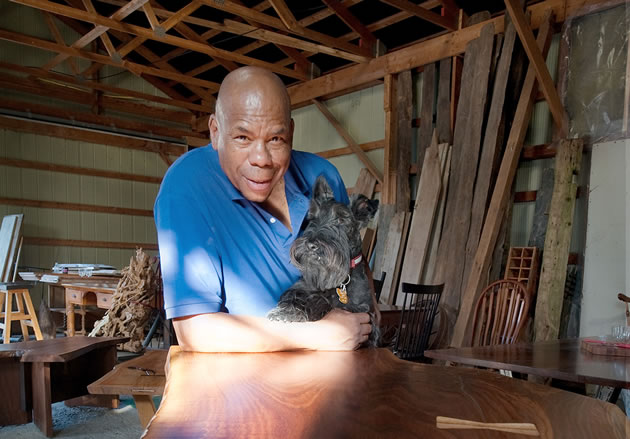 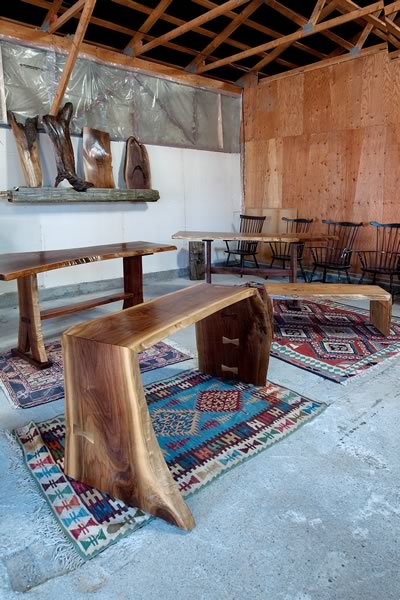 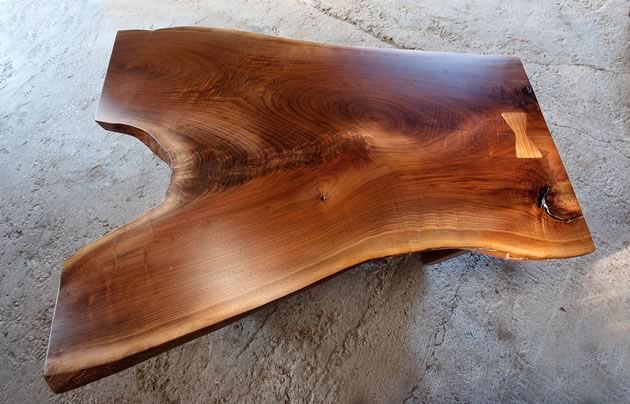 Learn more about  Deep Water Wood, which started in Rosemont 12 years ago.

About the Author More by Kristi Green

Kristi Green is a freelance writer who lives in Mulmur.
Add a Comment