Barrie Shepley: One of our 2016 Local Heroes

Triathlon coach, mentor and announcer seems like an unlikely career path for someone who is a born storyteller. But Barrie Shepley’s skill at sussing out people’s stories is precisely what makes him so effective.

Anyone who has heard Barrie behind the microphone at a triathlon event, whether in Caledon, Hawaii, New Zealand or any of the 15 or more major international races for which he provides colour commentary every year, will appreciate his skill. 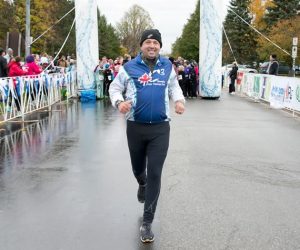 Not only does he have a story about every competitor in these gruelling races, which involve swimming, cycling and running, but he also often adds tidbits about the athlete’s family – from mum and dad to Great-Aunt Alice. His quick recall is that good.

Barrie’s chatty storytelling style is legendary in the triathlon world, and this same skill makes him a gifted coach and mentor. Equally important though is his team-building ability. He forges links and brings together experts who can help young athletes – in any field – achieve their goals. The Palgrave resident won’t fine-tune your front crawl, but he will make you a better competitor. It’s no coincidence then that Personal Best is the name of the company he operates with his wife Caron.

“I have a high-performance brain and a low-performance body,” he likes to joke. But when he says, “I have way more joy helping others than I do doing it myself,” he really means it. He gets to know an athlete’s story, what makes them tick. “Coaching is like having a child,” he says. Then proudly adds, “I vicariously have many children.”

Barrie’s vicarious children aren’t just the really talented ones, such as triathletes Andrew Yorke, who competed at the Rio Olympics this past summer, and Sean Bechtel and Taylor Reid, also international competitors. They are the adults who swim every week at the quarry pond near Caledon Village and the thousands of youngsters who participate in Kids of Steel races, mini-triathlons for children as young as three.

In fact, Kids of Steel was Barrie’s invention, his way of making sure the sport he loves would always have a fresh crop of competitors. The introduction of this program, now countrywide, followed from his efforts to establish Triathlon Ontario while he was still a kinesiology student at McMaster University.

Barrie credits much of his success to the exposure he received when Simon Whitfield won gold at the 2000 Sydney Olympic Games. At the time, Barrie was Canada’s head triathlon coach and had helped Simon since he was a kid. Simon’s Olympic performance caught the attention of Caledon resident Arden Jackson, who joined Barrie’s non-profit C3 Canadian Cross Training Club, then pushed him to launch a local Kids of Steel race. The 2017 race, which takes place May 28, is expected to attract as many as a thousand young competitors.

At 53, Barrie is still full of ideas – and energy. “My brain thinks I’m 28 or 29,” he laughs. Using this energy, he wants to inspire others and ensure that Caledon has a sporting infrastructure – coaches, competitors, sponsors, equipment and supporters – that extends well beyond triathlon. Add Caledon’s community spirit to this mix, he believes, and the combination is unbeatable.