Innocents in the Woods

How a city couple learned to love gumboots. 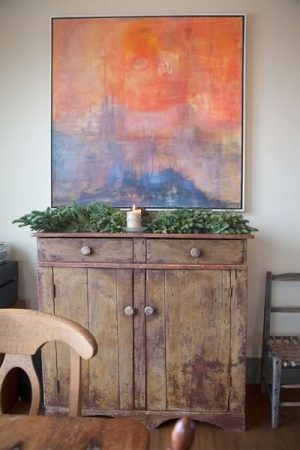 A painting by Gideon Tomaschoff adds a dramatic splash of colour to the white walls. Photo by Pam Purves.

Being avowed city slickers with busy careers – Peggy as a columnist for The Globe and Mail and Ian as a documentary television producer – the two weren’t at all sure country life was for them.

They finally found a 50-acre parcel with no house and no apparent view, but lots of “vicious” buckthorn on the nine acres of land flat enough to build on. Ian noted he couldn’t walk the site without coming back bleeding. But the price was right, so after exploring the property a few times, they brought along a ladder and climbed up to find out if there was anything to see. Lo and behold, they discovered a long southeast-facing slope with big views of rolling hills and forest. They bought the property.

Then, launching themselves once more into the unknown, they started to plan a new house. “It was fun because we had no idea what we wanted or how to do it,” says Ian.

They hired a friend, designer Jim Pearson, and the drawing began. For months Ian travelled everywhere with a tape measure because he couldn’t visualize the dimensions on the drawing. But the couple knew this much: They wanted something like an old farmhouse but with all the “mod cons.” Pearson, who has designed many houses in the area, was very familiar with the indigenous style of 19th-century Mulmur and began to envision a contemporary version of a classic Ontario Gothic farmhouse.

As the couple’s thinking developed, they realized they wanted to bring the views into the house. They also wanted space that was very bright. “It is light and beauty that shapes your mood,” says Ian. “It takes you out of yourself .”

For Pearson, three things are very important – proportion, the axis of the house and the height of the ceilings. Ian and Peggy say he has a kind of Greek feel for proportion, a sensibility obvious to anyone who now walks into their home. All the houses Pearson has designed in the area are built on an axis. He loves long, straight lines, and in this house, the front and back doors align perfectly so visitors can see through the house and down into the valley.

The contractor was Earl Hand, now retired. Ian and Peggy describe him as a wonderful guy to deal with. There were no conflicts. This might have been the result, at least in part, of Hand’s comically shrewd pricing formula: If the owner wants to hang around, add 10 per cent to the base rate. If the owner wants to pitch in, tack on another 20 per cent. And oh, yes, nothing would happen during deer season.

The resulting modestly sized house is a pleasure to be in. Working with decorator and friend Melody Duron of Melody Duron Interiors, they have created a warm and comfortable home that is easy to manage and feels strong in storms. There is plenty of light. And the kitchen looks over the living area and into the valley. Peggy and Ian say they wouldn’t change a thing.

Once the house was completed, the novel idea of gardening popped up. For the self-described neophytes, though, the learning curve was steep. 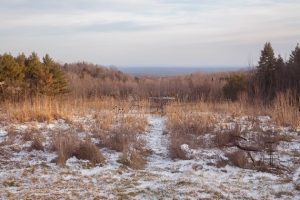 A trail leads to a view across the Mulmur wilderness. Photo by Pam Purves.

Ian likes to do things himself and plunges in where angels fear to tread. He had a berm put into the laneway circle, which he planted with wildflowers. They lasted about a year before the local “thugs” – native wild plants – moved in and kicked them out. Used to the city, where “you are cajoling a pale shadow of nature to thrive,” Ian took some time to get used to the idea that in the country, “you are beating nature off with every weapon you can buy.” Peggy adds, “We were down on our hands and knees in a May snowstorm planting these tender little things. They didn’t stand a chance. Those that survived the first assault were mugged by thistles.”

The couple have a new respect for the idea of Roundup.

Then Ian decided he’d like a pond. “If you have a pond, you have a pond problem,” he now says with the wisdom of experience. He had noticed water accumulating in an area of the hard-packed clay that constitutes most of the property. He had a hole dug. Winter came, the pond filled up and the water stayed. But the pond couldn’t be seen from the house. So he had a second hole dug. That hole was in view, but the water leaked out. There was apparently less clay in the new spot. Determined to have a pond to complement the view, they set about digging clay out of the original pond to line the walls of the new one. Then they connected the two with a water pipe. Job done.

Much of the property is forested, the result of rewilding that began nearly a hundred years ago on land that had been over-logged and over-farmed. The forests have now come back, wildlife has returned, and neighbours have even seen the occasional bear. Trails lead into the woods, and the pond is a joy. The land is vastly healthier than it was a century ago.

So Peggy and Ian have learned a great deal about building, about land and about wildlife. They have also learned about the weather. “Living in the city, you never understand how powerful nature is and that you must respect it for your own safety,” says Peggy. “If you’re caught in a whiteout and drive into a ditch, you’re cooked. Or if you visit friends for dinner and a storm comes up, you may well be staying for the weekend.” They watched in awe as 50-foot cedars were dropped like pickup sticks in last spring’s ice storm.

“It feels like we’re on the edge of a wilderness,” Peggy says. “I listen to the crickets and peepers and feel completely secure. I love all the bird sounds in the morning. The aural landscape has become as important as the visual landscape.”

These formerly confirmed urbanites are now happiest dressed in gumboots and tattered clothes, with mud up to their elbows. Their adventures have been frequently recorded in Peggy’s column. The Big Bad Wolf is delighted to have them in the neighbourhood – and they are delighted to be there. 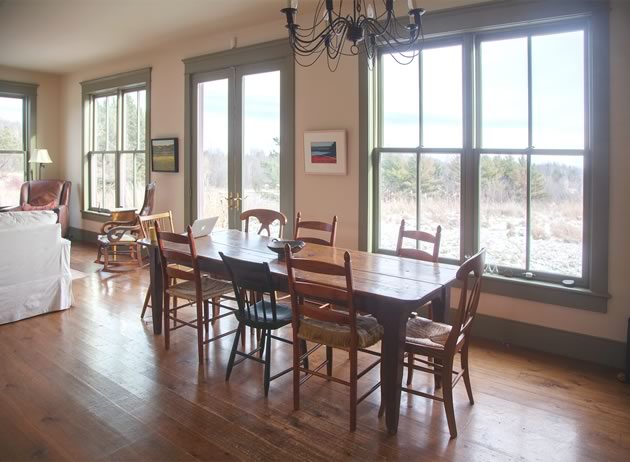 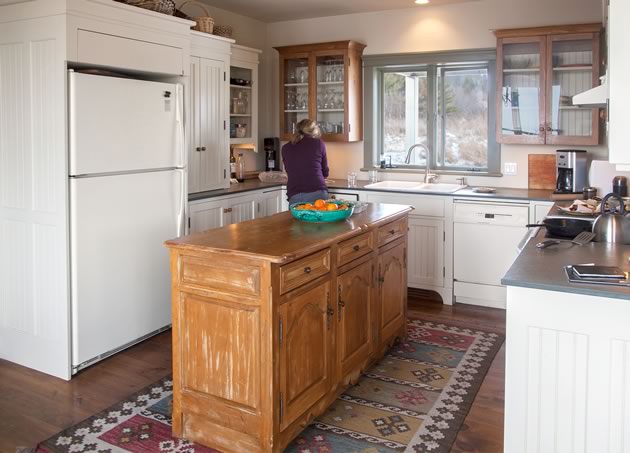 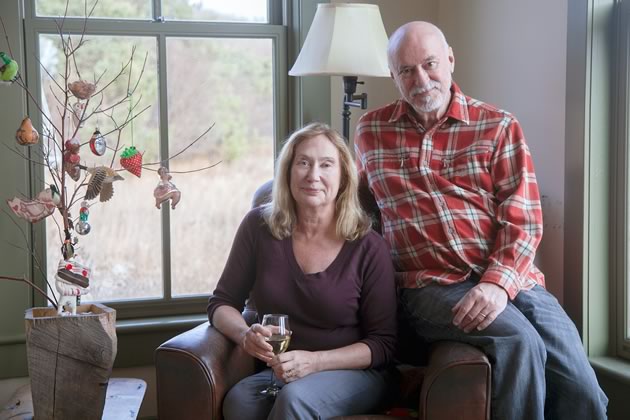 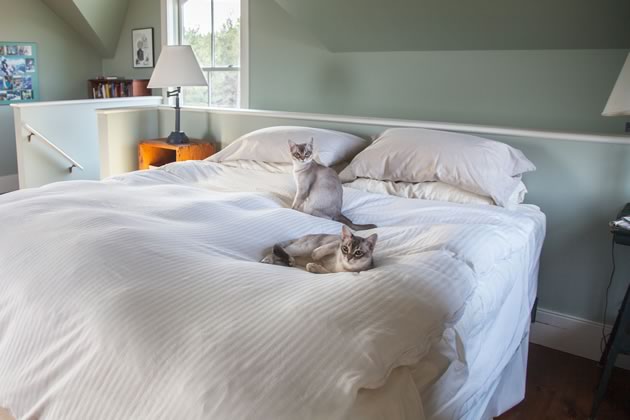 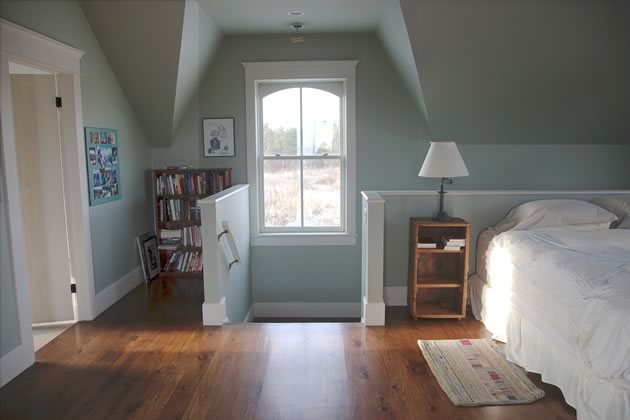 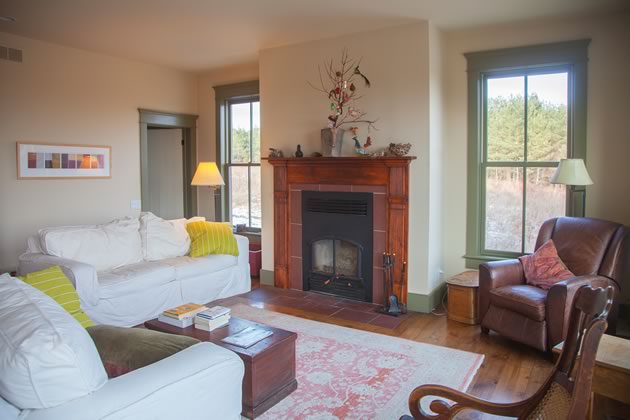 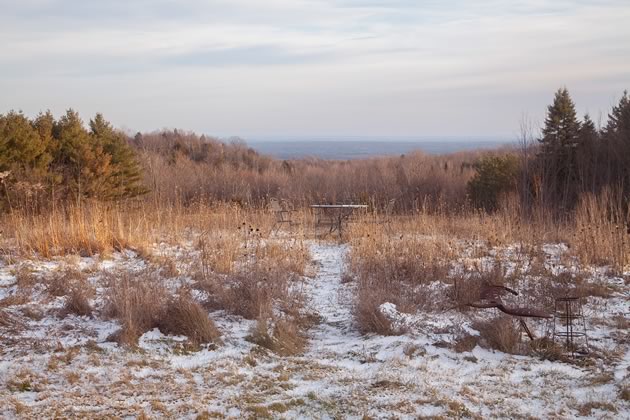 <
►
>
The emphasis is on simple comforts and the living room offers a delightful spot to savour a view of the outdoor wonderland while snuggled warmly by the fire. Photo by Pam Purves.