Liz Armstrong: One of our 2016 Local Heroes

A self-described introvert, Liz Armstrong is a reluctant hero. But her passionate belief that ordinary people working together can achieve extraordinary things persuaded her to overcome her natural reticence. 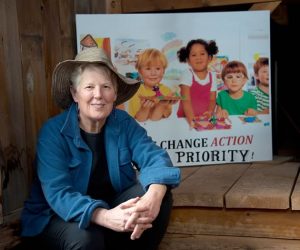 After all, her goal is to inspire individuals – introverts, extroverts and everyone in between – to unite in taking action against climate change. “If I can put myself out there, other introverts can too,” she says.

Liz’s latest book is A Handbook on Climate Action for Baby Boomers: How History’s Most Privileged Generation Can – with Guts and Gumption – Still Leave Our Kids a Livable Planet. (With deadpan humour, she notes short titles aren’t her forte.) The workbook-style volume sets out a slew of strategies that individuals, on their own and in collaboration with others, can implement to do their bit. And to ensure the book reaches the widest possible audience, anyone can download it from the book’s own website – free of charge.

Liz’s journey to climate-change activism has been a bit of a winding road. The first step may have been taken when she was a child growing up in 1950s Toronto. She vividly recalls the summer day when a crop duster flew low over her family’s home near one of the city’s many ravines. Though she didn’t know it at the time, the plane was spraying DDT, a pesticide now widely banned, to keep down mosquitoes. By the next day all the goldfish in the family’s backyard pond were dead. “I remember thinking, What is that stuff?” says Liz.

But it was David Suzuki’s groundbreaking 1989 radio series It’s a Matter of Survival that really galvanized her. By then she was living on the Ninth Line of Erin, and a career in teaching, freelance writing and public relations had helped equip her to analyze issues, come up with solutions and develop strategies for persuading people to take action.

She became involved in various environmental causes, which spurred her to collaborate on writing two books. The first, penned with lawyer Adrienne Scott and published in 1992, was Whitewash. The second, published in 2009 and co-written with ecofuturist Guy Dauncey and environmental writer Anne Wordsworth, was Cancer: 101 Solutions to a Preventable Epidemic.

For the past few years, however, Liz has zeroed in on climate change. A member of various local groups, such as Transition Erin, she is a force behind the Fast Forward Eco-Film Festival, a documentary series that runs annually from January to April. And along with likeminded colleagues in the Erin chapter of Citizens’ Climate Lobby Canada, she supports a carbon tax – but a carbon tax with a difference. To mitigate the negative effects of the tax on people’s pocketbooks, she advocates redistributing to citizens all revenue collected.

This plan accords perfectly with Liz’s belief in collaboration. “When we take action together, it’s actually that much more powerful,” she says. Small wonder she is inspired by the words of writer Emily Kimbrough: “Remember, we all stumble, every one of us. That’s why it’s a comfort to go hand in hand.” Rest assured, Liz’s hand is extended and ready to help.