To the first settlers of these hills, a passing shadow in the trees could mean food to be harvested, perhaps a deer. Sometimes it meant a pest to be shooed away, a fox or raccoon. It could also mean something to be feared.

Wolves were the worst

Jeremiah Phillips was only a half mile from his cabin on the 3rd Line of Amaranth when he spotted the yellow eyes behind him in the gathering darkness. Hastily he scrambled up the nearest tree, and none too soon for in a silent instant the wolves were all around him. Strangely they had no interest in the cow he was leading – she took off, heading who knows where. Instead they circled the tree, then sat on their haunches gazing up at him. In the distance he could hear his wife blowing their battered old bugle, a homing signal used by many pioneers after dark, but Jeremiah was in the tree for the night.

The next morning when the sun rose high enough to shine on him, the wolves, in what seemed like a committee decision, slipped away as quietly as they had appeared, and Jeremiah went home to his grateful family.

Jeremiah was an Amaranth pioneer, and there is little doubt he underwent this “wolf experience” described by Dufferin historian Adelaide Leitch. But the early lore of these hills is rife with variations of his pursued-by-wolves tale and how genuine these stories may be is moot, for the mythology of the wolf as the most dangerous beast of the forest was firmly carried in the psychic baggage of every European who came here in the early 19th century. And succeeding generations perpetuated the belief. Not just in campfire stories but even in obituaries. At the death of an early pioneer, our local newspapers would invariably comment on his or her bravery for settling here at a time when wolves and bears roamed the townships. 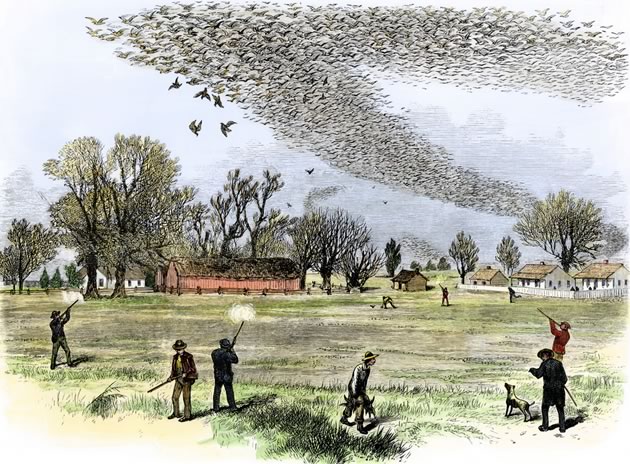 Once a regular food for pioneers, passenger pigeons were so numerous that witnesses described how they darkened the sky in the multi-millions, taking a full day to pass over. However, mass shoots in the mid-19th century so depleted their numbers that a sighting of ten birds near Orangeville in 1899 is believed to be the last flock ever seen. The lone survivor of the species died at the Cincinnati Zoo in 1914. Smith Bennett, Louisiana 1875.

Were bears not as scary?

Those same local papers seemed to deliberately soften the danger posed by bears. Bear sightings, or more often bear shootings, were always newsworthy, but the reporting style reveals a rather bemused attitude. The Bolton Enterprise typically described an unwanted visitor as “Mr. Bruin,” for example, while “His Bearship” prevailed in the Grand Valley Star.

Not only is this choice of gender curious, for the female of the species is usually the greater threat, but the Disney-like language suggests that compared to wolves, bears were a much lesser threat. Even though the appearance of “Mr. Bruin” in a neighbourhood would rouse a huge response, it seems our local reporters could never resist a smirk.

The Shelburne Free Press in 1887 offers a typical case. When a bear wandered onto Jim Webster’s farm at Horning’s Mills in June that year, it was met, according to the Free Press, “with a force from the village, armed with rifles, guns, muskets and clubs.” By the time the bear was treed, “everyone in the hamlet from Dr. Barr on down had joined in the chase to cover themselves with cheap glory.” The inevitable death of the unlucky beast was celebrated at Allen’s store with “ginger pop, cold teas, etc.,” and Dr. Barr was asked who shot the bear. He replied, “We all shot him.”

However, it is unlikely conversations in the first cabins to dot these hills were as flippant as that one. To the pioneers, bears were a real danger. Unlike wolves, however, they were rather blunt and obvious, and their real threat was to livestock. An entry in a diary owned by Anne Stuckey, an early settler of East Luther, covers it neatly: “It was a very coman thing to heare your pigs squilling an go out an find a bare just going away with Mr. Pig in his mouth.”

Since livestock meant livelihood, even survival to Anne’s contemporaries, it’s easy to understand why an entire community would gather to chase down an intruding bear.

The bounty in the forest

Although the aura of threat from wolves and bears seemed to pervade like a mist over the lives of the early settlers, those days of danger were short lived. Less dramatic and far more sustaining was the reality that the wildlife of the forest was a resource for them, a key food supply in the beginning, and over time, a supplement.

Deer abounded and dressed venison often appeared on the shelves of local stores. Rabbits were common fare because they were so easy to catch and prepare. Many a table regularly offered squirrels, groundhogs and, of course, ducks and geese. The fish in creeks and rivers made these hills a land of plenty.

Samuel Wolford, who became Bolton’s first certified school teacher in 1842, tells of spearing salmon up to four feet long in the Humber River. He describes the custom of setting a large basket by mill dams in the evening. In the morning it would be filled with fish that had been trying to jump the dam. 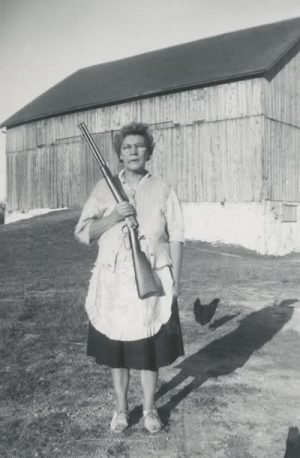 The fox as “enemy of the chicken coop” is firmly rooted in both mythology and reality. Competing with this clever animal was (and still is) a constant for rural people. Mary (Rolstin) Clarke (1897–1957), shown here c. 1945, was determined to keep her chickens safe at her farm on the 4th Line of Melancthon Township. Photo Courtesy Dufferin County Museum And Archives P-5374.

Sadly the days of wildlife as a harvest passed quickly. Streams that were not overfished were blocked with dams. As the forest was thinned, the shadows in the trees began to disappear. And, almost a last straw, hunting in the late 19th century became a group sport. Organized “shoots” as they were called brought together large numbers of hunters for coon hunts, skunk hunts, deer hunts. Often organized as group versus group competitions, the shoots had a devastating impact on the wildlife population.

The Peel Banner, for example, reported in December 1874 that the winning team of a skunk hunt had taken down 1,550 of the “white stripes,” while the losers bagged 965. Although these numbers stretch credulity (the winners were accused of amassing quarry in advance of the contest), there is little doubt a shoot was often little more than a mass-killing event.

By the beginning of the 20th century, local newspapers provide a clue to what the forest had become. In 1899 a deer was seen in a field near Whittington and the Shelburne Economist thought that news rare enough to print it on the front page. The Bolton Enterprise was similarly impressed in 1912 by a 22-inch speckled trout a teenager pulled out of Parson’s Creek in Caledon East.

Somewhat earlier the Orangeville Sun reported that a sheep near Farmington choked on a snake it had swallowed. A 40-inch eel caught in Scott’s Lake (now Innis Lake) drew major attention in 1905, while two years earlier the Grand Valley Star and Vidette was pleased to report the sighting of a bear near Colbeck – not Mr. Bruin anymore, nor His Bearship, just a passing bear. In but a few decades the shadows in the forest had become a curiosity.

Although there have been fatal bear and wolf attacks in Ontario, there has never been a verified death in the part of the province we know as the hills. In June 1870, the Orangeville Sun reported the dead bodies of a bear and a native man were discovered in Mulmur Township, lying side by side in what seemed to have been a death struggle. But no official record of the death has been found.

In its September 13, 1889 edition, the Bolton Enterprise delightfully told readers about a resident of Mono Road who emptied one barrel of his shotgun at six blackbirds roosting on a branch. The shot opened and closed a crack in the branch, trapping the birds by the toes. A shot from the other barrel severed the branch which then fell into a fishing hole below. While wading in to retrieve the birds the man’s boots filled with water – and 43 speckled trout! The Enterprise was not the only publisher of these creative reports. 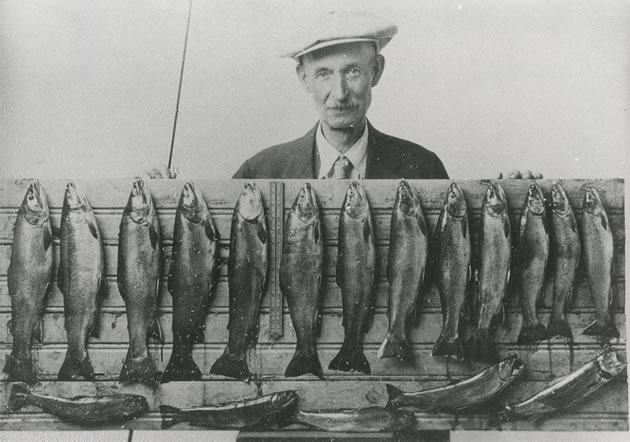 The Headwaters area from one end to the other has long been known as a fishing paradise. Above, George W. Berney, c. 1920, longtime resident of Caledon East, proudly displays a day’s catch of speckled trout.

Until 1820, salmon fishing on the Credit River was restricted to members of the Mississauga nation. Aboriginals  fascinated newly arrived Europeans with their practice of night fishing. One person would stand in the bow of a canoe with a torch that attracted salmon to the surface where they would be speared by others in the canoe.

Salmon on the Humber River in and around Bolton were once reputed to be so thick at spawning time that Aboriginal boys would challenge one another by running across the river on their backs. While this claim appears to be a classic fish story, the fact that it appears in a various and several sources suggests it may have some truth.

Regrettably, salmon disappeared very rapidly from the Credit when the proliferation of mills and tanneries led to habitat change. The disappearance of these industries, in turn, has enabled a slow but appreciable return of salmon to the Credit.

In 1952, the Ontario Ministry of Natural Resources released Canada Geese into the Orangeville Reservoir (now Island Lake) and was celebrated throughout the province for its program to bring back this “increasingly rare” species.

The Underside of Sport in Peel County

Although cock-fighting became illegal in Ontario early in the 19th century, according to the Perkins Bull histories it remained quite active, albeit secretive, in Peel County. As late as the 1890s, pits were operating in such places as Alton, Caledon Village and Palgrave, especially if the famous Peel bred-and-raised fighting cock, Red Robe, was on the ticket. Perkins Bull also describes accounts of (again illegal) dog fights, as well as  a pit in Cheltenham where cats were matched against live-trapped rats.