Some things in life can make me feel like a kid again: spitting watermelon seeds, ripping open Christmas presents and, as I recently discovered, playing Ping-Pong. But this social and fun sport has more to offer than simply reliving youthful memories. In the case of David Davies, it put him back in the driver’s seat.

Though commonly called Ping-Pong, that term was commercially trademarked in the early 20th century, so the sport’s official name is table tennis. A 19th-century English invention first played as a makeshift parlour game, it started with a lineup of books that served as the net and yet more books used as rackets to hit a golf ball. Since then, the game has come a long way. Rubber-coated wooden rackets, or paddles, are used to stroke a lightweight, hollow ball over a miniature tennis-like net on a raised table. An Olympic sport since 1988, table tennis at the world level is dominated by quick-reflexed Chinese players. But the game is also popular with amateurs, including some enthusiastic Mono residents.

When I showed up at the Mono Community Centre for the debut of the second year of the Mono group’s weekly Ping-Pong league, I expected my childhood skills to kick in immediately, sort of like riding a bike. But I entirely missed the first ball that came my way, and the second dribbled into the net. Determined to improve, I soldiered on.

Fortunately, my progress was meteoric. By night’s end I had even hit a smash or two, though those risky shots mostly careened off the back wall and failed to score a point. But that didn’t matter. More important were the cheers my bravura smashes elicited from the younger players.

That night everyone had a ball – and I mean a fun-filled, laugh-out-loud, where-did-the-time-go, kids-interacting-with-baby-boomers kind of ball. Ping-Pong rocks and every small town should have a league.

Craig Fleetwood, a relative newcomer to the village of Mono Centre, brings along his kids – Damian, 14, and Felicia, 9. “It gives us a sense of community, of connecting with neighbours,” says Craig. All three Fleetwoods have met friends while also improving their hand-eye co-ordination. 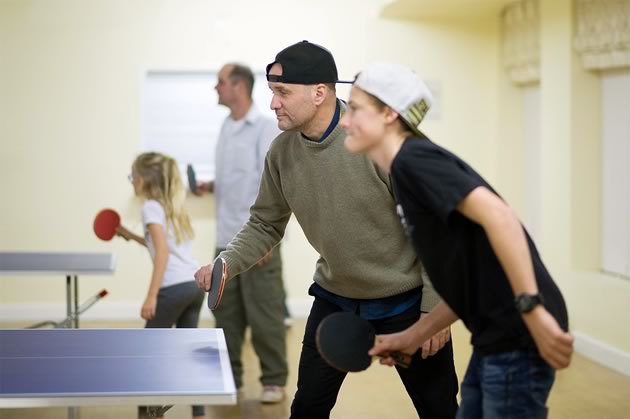 Newcomers to Mono Centre, Craig Fleetwood and his son Damian make a mean duo at the Ping-Pong table. Along with daughter Felicia, the family finds the weekly night out “gives us a sense of community,” says Craig. Photos by James MacDonald.

“The kids take it seriously,” Craig explains. “They practise at home, took it upon themselves to learn the rules online, and look forward to the Wednesday night league.”

The rate at which Damian and Felicia are improving, and the league’s popularity, are the reasons key organizer Karen Rosenbrock is raising money to purchase a third table. “With another table we can accommodate players at various skill levels,” she explains.

Karen credits Kim Perryman, Mono’s recreation director, with helping to get things going. The town bought the first two tables and is otherwise supporting the budding league until it can stand on its own. “Local residents wanted to bring the community back into the community centre,” says Karen. The plan seems to be working.

On average, about a dozen players and spectators brave the dark and cold of a Mono night, giving up TV, to gather at the community centre. Even if they don’t pick up a paddle, everyone likes the chance to catch up with neighbours and enjoy the laughter, the music and often a batch of cookies. “Bad weather is good for Ping-Pong,” says Karen, adding the game is “affordable [$20 for the December to May season], fun, active and community-driven. And it’s a great way to beat the winter blues.”

After I had played several games of doubles, it was time for a singles match against Stella Davies. A decade older than I am, Stella began playing only a year ago. Easy pickings, I thought as my competitive juices kicked in. For the next 15 minutes or so, we exchanged forehand and backhand shots. A tricky serve I’d perfected as a kid gave Stella some trouble. Her consistency tried my patience. She seemed to return everything. We had a good-natured though intense battle that ended with each of us winning a game. When we put down our paddles, I told Stella she was a heck of a player given she’d only been playing for a year.

I subsequently learned that her quick rise from rank beginner to intermediate player was a story in itself.

A few years earlier, her husband, David Davies, had undergone surgery to remove a benign brain tumour. The size of an egg, the tumour was one of the largest his surgeon had ever seen.

Though the surgery eradicated the tumour, it didn’t improve David’s vision. When travelling behind another car, for example, he could see only one brake light at a time. Concluding it wasn’t safe to drive, he had limited his time behind the wheel to driving the garbage to the end of the family’s country laneway.

When Stella saw an ad for the table tennis league, the couple decided it would be fun to join. “I wasn’t looking to Ping-Pong as a remedial thing,” says David. “I believe in exercise and this seemed like a great idea.” But when he started playing, his eyesight was a problem. “I missed most shots at first. My depth perception was poor,” he says.

But the more he played, the more his game improved. Then one day as he was driving the garbage to the roadside, he noticed the problems that had caused him to all but give up his car keys seemed less severe. Wondering if his new pastime had anything to do with it, David and Stella began playing as often as they could.

Today, not only is Stella a solid player, but so is her husband. Ever the gentleman, David wouldn’t reveal who is the better player, but he did say that when the Davies’ car turns into the community centre parking lot these days, it’s he, not his wife, who is confidently and safely in the driver’s seat.

For more information about table tennis in Mono, contact Karen Rosenbrock at 519-942-4486.