Among Canada’s troops at Vimy was a young poet named Christopher George Cook.

This year marks the 100th anniversary of the Battle of Vimy Ridge. The battle, which  took place from April 9 to 12 in 1917, has assumed an iconic stature in defining Canadian nationhood. It was the first time all four Canadian divisions were assembled together, and the success of the Canadian Corps in taking the now famous escarpment near Arras, France is attributed to unusually meticulous planning and rehearsals involving all the troops.

Among Canada’s troops at Vimy was a young man named Christopher George Cook. More than 10,500 Canadian soldiers were killed or wounded in the famous battle, but Cook survived, and many years later he vividly recounted his experience in his poem called “The Night Before Vimy.”

In an explanation of the poem, Christopher Cook described the situation in which the Canadians found themselves in October, 1916 when they took up duty in the “stinking, chalky quagmire at the bottom of the ridge.” The Germans believed their stronghold on the ridge was impregnable, but they had held it over the previous year at the cost of tens of thousands of both French and German lives.

“Not many of them received a proper burial,” Cook wrote. “Most of those who fell were buried, exhumed, and buried again and again by the hellish rain of shell fire … During these months several large mines were exploded in no man’s land, leaving giant craters 30 feet deep and twice that in diameter. Listening posts would immediately be established on crater lips and were lonesome, isolated, fearsome positions, close to the enemy’s lines. These posts became known as the crater posts, and the hours of duty in them was a dreaded chore.

“Beyond the crater posts, the terrain was a forbidding, shell-torn, churned-up mass of chalky clay, deep shell holes, broken trees and smashed farm buildings. On a moonlit night the whole vast scene of destruction … gave birth to queer images and shadows among the gaseous clouds rising from the shell holes.

“Is it any wonder that a young lad, stationed in one of the lonesome crater posts, thinking fondly of his home, waiting and wondering about an unknown fate when the battle would begin at dawn, with the thought ever in his mind of those around him who had given their lives a year before … would conjure up strange images in that lonely place? … The writer knows, for he was that lad.” 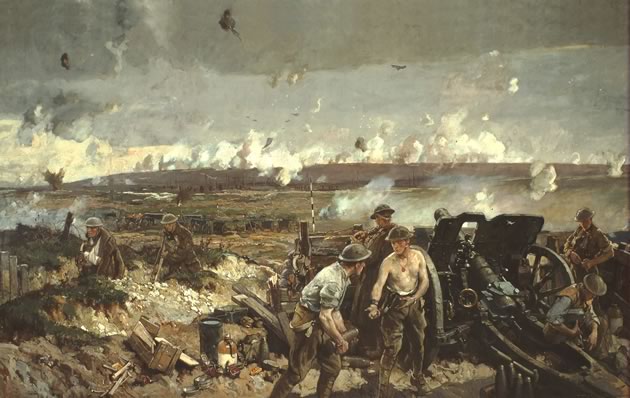 “The Taking of Vimy Ridge, Easter Monday 1917” by Richard Jack

The Man Who Wrote the Poem

War casts a long shadow across the life of a soldier, but it is not his whole story. Christopher Cook was also a lifelong writer, a master electrician, a husband and father. The youngest of his five children, Dale Wood, who now lives in Mono, prepared this brief biography of her father on behalf of her family: 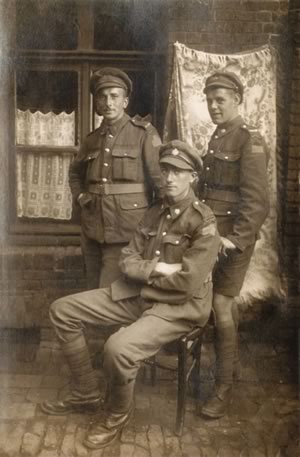 Christopher George Cook was born in 1892 in Cookstown, Ontario, one of nine children from Irish immigrants. He spent his youth there and at a young age enjoyed storytelling. He aspired to one day be a publisher and editor of a weekly newspaper, but the closest he came to reaching that goal was serving as a printer’s devil, eventually rising to what was then known as a two-thirder, in the office of the Cookstown Advocate, an obscure weekly paper now resting in peace.

The call for Canadians to support the homeland came for him on January 24, 1916 when he joined the 169th Overseas Battalion, leaving for England October 17, 1916 and disembarking for France on October 28, 1916. During his time in France he was assigned to the Princess Pats regiment as a machine gunner. He was discharged in May of 1919.

After the war he returned home, became a master electrician and married but lost his first wife to a heart condition. In 1932 at age 40, he remarried a woman 22 years his junior and over 20 years had five children and 16 grandchildren. He worked for Westinghouse in Hamilton and Dancy Electric in Toronto, and had a short stint teaching at a trade school in Hamilton until he started his own company Cook Electric in 1946.

In his late 80s, as one of the few surviving veterans, he was interviewed by William D. Mathieson for his book My Grandfather’s War: Canadians Remember the First World War, 1914–1918. His children recall his constant hammering away on an old Underwood typewriter while sitting at the dining room table. He was a private modest man and was in the process of writing a book of short stories when he died in 1979 from lung disease brought on by mustard gas in the trenches. A lot of his work is in draft copy and some never completed.

The family is uncertain when he wrote “The Night Before Vimy,” but feel it deserves publication to honour their father and all veterans.

The Night Before Vimy

He stood in the crater posts that night
In April of seventeen
Tired and cold and fearful
In the night wind, sharp and keen.
Keeping watch in a war-torn land
With the same misty moon above
That once shone on farmsteads and happy homes
In a land of peace and love.

Off to his right was Thélus
While short left front La Folie Wood.
Secreted concrete bastions
Where Saxon and Prussian stood
Awaiting the morn with bated breath
Only a few short hours till death
Would claim some of them. Who would it be?
They waited the dawn as tense as he.

Half a mile to his left lay Souchez,
Its building beaten down
Leaving stark, dead ruins
Of a lovely peasant town
Once nestled secure at the foot of the ridge
Now lying dead by the river’s edge.

Back of him were the pylons
Where the rats grew big and bold
Feeding fat on the corpses
That lay ’neath the stinking mould.
Men who had died in the flower of youth
Buried there by the score.
Bodies of fighting Poilus
Who died the year before.

Further back was the cobbled road
Bathed in the light of the moon,
One way leading down to Arras,
The other to Béthune.
Guns were massed along that road
And the gunners with nerves tight drawn
Waited to hurl their missiles of death
When the order came at dawn.

But the guns were having a rest that night.
Scarcely a sound could he hear
As he looked out front at the jumbled ground
Along the ridge to a little mound
Just out from Thélus wood.
He thought he saw a movement there
But he wasn’t sure and didn’t much care
As alone in the night he stood.

He watched the gas clouds in the holes
That shells had made between the boles
Of shattered trees that seemed to creep
And shiver, casting shadows deep
Within the eerie light.
While overhead the star shells red,
and blue and green,
Propelled into the air by hand unseen,
Made weird and ghostly figures in the night.

Into that poisoned mist he gazed,
His eyes so heavy, his mind half-dazed
From lack of sleep and a pent-up fear
So great at times he could hardly bear
To think what the morn might bring.
Thoughts came racing through his brain
Such as will come to the mind of one
In the dead of night, when he’s all alone,
Heartsick, weary, chilled to the bone.

Mother and Dad, I’m with you there,
Sitting once more in your big armchair.
Young Jim is with us and sister too,
Oh God, it is good to be home with you.
Tomorrow I think I’ll go down to Queens
And see the football game.
Our Father who art in Heaven,
Hallowed be Thy name.

There’s that movement near Thélus again.
He could see but dimly from where he stood,
But something was moving out there by the wood.
Was it only his fancy? Was it beast or man?
He rubbed his eyes and looked again.

Then out from Thélus Wood there came
Four by four and column of route
Horsemen, footmen young and old,
Shoulder to shoulder and boot to boot,
They came as on parade.
While over by the little mound
Figures rose from out the ground
And joined the cavalcade.

As on they drew, their numbers grew
While all along the way
Companies formed and wheeled in turn
To form a vast array
Of bearded men and gangly boys
Scarce parted from their childhood toys,
Their faces wan and gray.

There came a sort of whispering sound
That seemed to rise from all around
The post that he was in.
And as their first ranks passed him by,
Faintly did he hear their cry,
“Vive, vive le Canadien.”

Signe Ball is publisher/editor of In The Hills.
Show 2 Comments