I was up for a peaceful experience when I arrived at Monora Park for a cross-country ski on a foggy, December evening. As it turned out, I got more than I bargained for.

Parking in the large, dimly lit lot, I slipped my feet into my boots, clicked into my waxless skis and pushed off into the gloomy darkness. Not sure where the lit trail began, I glided by a large frozen pond on packed snow, thrilled to be doing an activity I love for the first time in a new season.

Monora Park (one of four maintained cross-country ski facilities in Headwaters, though the only one with lights) is situated in Mono on Orangeville’s northern border. The Mono Nordic Ski Club and the Mono Nordic Racing programs use the park’s 18 kilometres of ski trails that extend beyond the park’s boundaries onto property owned by Credit Valley Conservation and several good-natured citizens.

Drawn toward a vague glow in the distance like a moth to a light, I passed through an open gate and arrived at a wide trail that accommodates both classic and skate skiers. Strung between trees at the trail’s edge, a line of incandescent bulbs made the trailhead feel like a winter wonderland. I listened for evidence that I wasn’t alone, but all was silence.

Pushing off onto the broad, well-lit, two-kilometre trail, I gained my rhythm gliding along an undulating track under a canopy of magnificent maples and other hardwood trees.

Mostly track-set for classic skiers like me, but with lots of options for skate skiers, Monora Park’s colour-coded routes wend their way through forests, alongside ponds and over some sizable hills. Although I was alone, the snow was imprinted with the tracks of the regular Wednesday group who’d been out earlier in the day. I could almost hear their laughter as I slid along effortlessly in the dead-calm evening.

Night skiing at Monora Park is an intimate experience. The light buffers you from the darkness out there. Nonetheless, after skiing for about ten minutes, I left the warm embrace of the trail’s lit tunnel, switched on my headlamp and ventured out there, into the deep dark woods.

My headlamp illuminated an intense circle of light that petered out a metre or two in front of my ski tips. The night’s moisture sparkled in the glow, blurring what lay ahead. The trail was wide, but it soon required me to climb herringbone style up a steep slope. I crested the hill and swooshed down into an abyss on the other side. Fortunately, the trail builders had night skiers in mind and there was no 90-degree turn at the bottom of the hill.

Herringbone up, swoosh down, herringbone up, swoosh down. Exhilarated by the unknown, it was with regret but also some relief that I returned to the cozy comfort of the tunnel of light. It was as though I was abandoning the occasional feather-like, tingle-inducing glide of a stranger’s hand across my bare shoulders for a comforting hug from my kind and faithful spouse. I turned off my headlamp and pushed hard, going as fast as I could along the smooth, well-groomed main trail. This, too, was exhilarating, but I missed the unsettled feeling of the dark.

Branching off again onto the road less travelled, I passed back through the open gate, skied alongside the big pond and crossed an open field lit only by the dim glow of the hazy moon. It cast no shadow on the white snow. I really was alone. I headed for a yellow trail marker and a tunnel-like entrance that broke a wall of trees. 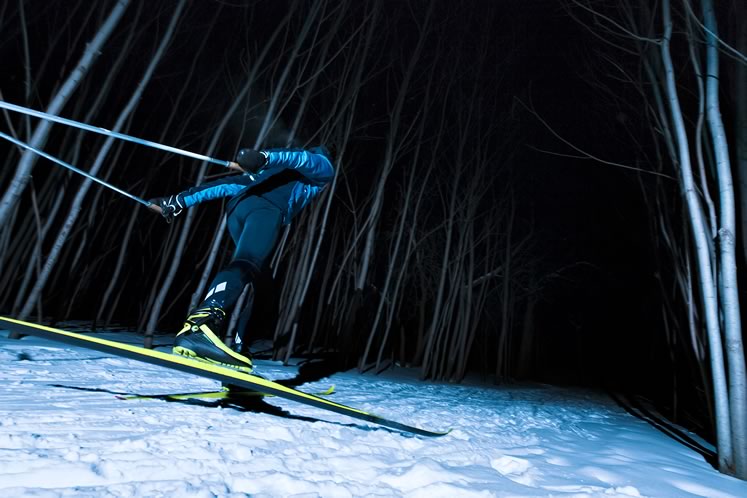 A hundred metres into the forest something swooshed overhead. I ducked reflexively. Glancing up, I sensed as much as saw an enormous creature swoop overhead. Through the darkness I heard the mechanical groan of powerful wings as it slowed down and settled onto an overhead branch.

When I focused my headlamp on this apparition, gimlet eyes stared back from a frying-pan-flat face. I made out the earlike tufts of an enormous great horned owl.

Nervously I skied on, but the pressing darkness was too much. I slowed to a stop and then turned back, ducking once again at the spot where I’d seen the owl.

Emerging into the moonlit landscape, I breathed easier. Switching off my headlamp, I skied ever so silently past the big pond and through the open gate, relieved to be back in the warm embrace of the well-lit trail.

Where to Find Groomed Trails for Cross-country Skiing

By night or day, cross-country skiing is a great way to enjoy the winter landscape. Here are trails worth exploring.

Ron Jasiuk says the club benefits from its proximity to Orangeville, its 18 kilometres of well-maintained and often hilly trails, natural beauty and club spirit. It also has a popular Jackrabbit (learn to ski) program for 5 to 10- year-olds, a group of recreational skiers who meet regularly and a 2-kilometre lit trial. You can rent skis, and the Monora Park Pavilion is open on weekends. mononordic.com

Cullen Perry is one of three coaches offering racing programs for classic and skate skiers. Track Attack is for 9- to 12-year-olds, the Junior Development program appeals to teenagers through to university students, and the Masters Program is for more mature skiers. Many participants take part in competitions. mononordic.com/wpblog

Hockleycrest’s 14 kilometres of single-track trails pass over property belonging to five owners. Dave Moule (see page 27)maintains the trails and sets the track. He says the skiing at Hockleycrest (just north of Mono Mills) is “like a backcountry experience,” because the trails are narrower than in Monora Park. There is no membership fee, but parking is limited. caledonbrucetrail.ca

The Mansfield Outdoor Centre has 40 kilometres of machine-groomed trails organized into ten routes, including a 10-kilometre skate-skiing loop. There are novice, intermediate and expert routes over terrain that ranges from steep hills to rolling forestland. You can rent skis, book a lesson, warm up beside a fire and enjoy a meal in the centre’s lodge. Day and annual passes are available. mansfieldoutdoorcentre.ca

The Terra Cotta Conservation Area has 6 kilometres of groomed and track-set trails. The Visitors’ Centre is open on weekends and you can rent skis and book lessons. Day and annual passes are available. creditvalleyca.ca

A little farther north, Scenic Caves Nature Adventures in Blue Mountains offers 27 kilometres of groomed trails rated from beginner to advanced. The trails wind through a soaring, 200-year-old forest and offer splendid views from the highest point on the Niagara Escarpment. Rentals and lessons are available and there’s a waxing hut and change rooms. Cozy up in the chalet afterward with chili or hot apple cider. Half-day passes can be had after 2 p.m. sceniccaves.com