Gogo Grannies: Some of our 2017 Local Heroes

In Africa, more than a million people die every year of AIDS-related illnesses. This works out to at least two or three deaths in the time it will take you to read this article. 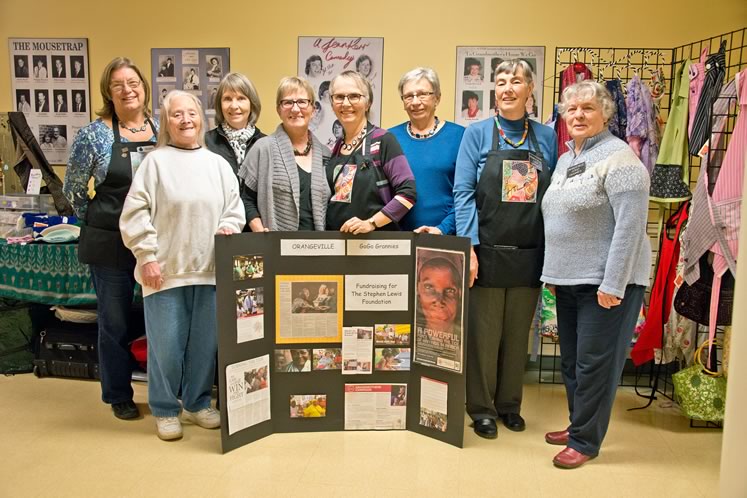 For more than a decade, Orangeville’s GoGo Grannies have been raising funds for and awareness of the plight of African grandmothers. These women, often in their 70s and 80s, grieving the loss of their own children to AIDS and sometimes struggling with the disease themselves, have been thrust into the critical role of holding their family and their community together.

The scale of the tragedy is horrific. The pandemic has created an estimated 15 million orphans. Sometimes a single grandmother is responsible for caring for eight or ten or more children. Canadian grandparents who have spent even an afternoon with energetic grandkids can imagine how exhausting that must be.

The Stephen Lewis Foundation’s Grandmothers to Grandmothers Campaign, often known as GoGo Grannies, was launched in 2006 to support these women. The grassroots Canadian movement now includes 240 chapters, and 10,000 grandmothers and grandothers, across the country. It has also spread to Australia, the United Kingdom and the United States.

The Orangeville chapter has about 20 members. One way they raise funds is by holding a variety of events, including African-themed dinners, musical performances, art shows, game nights, garden tours and sponsored nights in partnership with Caledon Townhall Players.

The GoGo Grannies (“Gogo” means grandmother in Zulu) also raise funds by selling goods created by group members and others, as well as some African fair trade goods, at local events. During a recent meeting Shirley Edgerton turned in an envelope containing $160, the proceeds of her day tending a table selling scarves, dishcloths and jewellery at the Belfountain Salamander Festival.

The Orangeville GoGo Grannies have an annual fundraising goal of $6,000. Over the group’s lifetime they’ve raised an impressive $62,000 for the cause. All the funds, excluding a minimal amount for expenses, are donated to the Stephen Lewis Foundation, which distributes the money for nutrition, education, health care, transportation and housing, as well as broader community needs such as business skills, grief counselling and HIV awareness.

Many members of the group were inspired to volunteer when they heard Stephen Lewis speak. The eloquent, one-time Ontario NDP leader who went on to serve as the United Nations Secretary-General’s Special Envoy for HIV/AIDS in Africa, has been widely praised for his effectiveness in drawing attention to the crisis. And the foundation that bears his name has now generated more than $25 million.

Members also say what appeals about this particular volunteer work is the ability to do something tangible that provides an emotional connection, in a grandmotherly kind of way. Whether it’s making crafts, cooking African food for dinners or staffing a marketplace table, says member Robin Harmer, “This is an action group. It’s not just fundraising.” She adds, “In my case, I get to be a grandmother without actually being a grandmother.”

Cathy Whitcombe, chair of the Orangeville group, says she was inspired to help the sheer enormity of the problem. “Imagine,” she says, “if a whole generation of the North American population simply disappeared. That’s what happened in Africa.”