In “Game Changers” in this issue, Johanna Bernhardt reviews the complexities of the care system and has an extended visit with one group of local families who created a homegrown solution to one perennial anxiety.

Late last year the Ontario government introduced Bill 66, Restoring Ontario’s Competitiveness Act. In the name of job creation, Schedule 10 of the omnibus bill included provisions which effectively would have allowed municipalities to override environmental protections, including the Greenbelt, the Oak Ridges Moraine and the Clean Water Act among others. The reaction from environmental organizations and many municipalities themselves was loud, swift and negative. The government backed down and withdrew Schedule 10. Local Conservative MP Sylvia Jones said the capitulation was the result of “confusion and misinterpretation” that grew from the bill. It was not a reassuring rationale, and environmental advocates remain on guard.

Meanwhile, there is another resistance growing. It is not grabbing the same headlines as Bill 66, but for those affected, the stakes are both intensely high and personal. The Ford government has recently announced two changes set to take place April 1. The first, to the Ontario Autism Program, tilts the bulk of funding to children under five. The second halts funding to the Ontario Independent Facilitation Network, a demonstration project in place since 2015 that helps young people with developmental disabilities find jobs and volunteer positions and otherwise navigate their lives. Facilitation Wellington Dufferin, the local organization, has already laid off its nine staff members.

The government says the moves are designed to improve service access for children and adults with developmental disabilities. And, indeed, no one is arguing that the care system, with it unconscionable wait lists and service disparities, is in dire need of an overhaul. But parents and other advocates fear the new model will simply stretch existing funding more thinly and not provide alternatives to the program losses.

While further details are expected in the government’s spring budget, current indications suggest these parents are right to be deeply concerned, especially those who have pre-emptively lost funded services with no viable fallback – a situation that hardly signals a well-conceived policy transition.

In “Game Changers” in this issue, Johanna Bernhardt reviews the complexities of the care system and has an extended visit with one group of local families who created a homegrown solution to one perennial anxiety. In 2015, as their children with developmental disabilities aged out of the fully-funded school system and faced uncertain futures, the parents launched Active Lives After School. It is now a five-day-a-week program that gives their adult children the chance to be socially engaged, active, creative and, perhaps most important, contribute to their community as volunteers. While not a panacea to all that ails the system, Active Lives offers an adaptable model that puts the choices of care and quality of life back into the hands of families. In uneasy times, it’s an inspiring story. 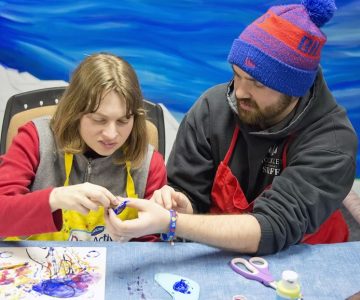 A Network of Care

Here is a rundown of programs and services currently available for teens and young adults with developmental disabilities.