In spring 1911, four wardens from neighbouring counties sat down for an informal chat. Their conversation here is imaginary, but the issues they discussed were the hot topics of the day – and eerily familiar.

At the time, Ontario was launching radical new policies. Canada was bracing for a federal election. A century later, it feels more than a little like déjà vu.

[The wardens have just reconvened after lunch. Three are seated at a table as Warden Greer enters hurriedly, carrying several newspapers.]

Greer  Here’s what I was talking about. [Spreads a copy of the Orangeville Sun on the table.] See what the Sun says about the prime minister? “Sir Wilfrid Laurier has lost his sunny way.” It’s in the Erin Advocate too.

Moore  And the Northern Advance. It started with a Toronto Globe editorial. Like we’ve all been saying, this free trade – “reciprocity” Laurier calls it – is going to cost the Liberals the election. They think they can just negotiate with the U.S. to eliminate tariffs and everyone will be rich. It’s too good to be true.

Fox  This is what comes of having a prime minister who’s big on smiles and charm. Does Laurier really think the Americans can be trusted to keep their tariffs low once a deal gets signed? Or trusted on anything?

McBride  We need to be listening to what the Ontario treasurer says – that trade in Canada should be going east-west. If it’s north-south, the Americans are always going to be in control. He says Ottawa’s got to work with the provinces on provincial tariffs.

Fox  Good luck with that! Besides, I’m tired of reciprocity. So’s the whole country. What else you got in those papers, Archie? 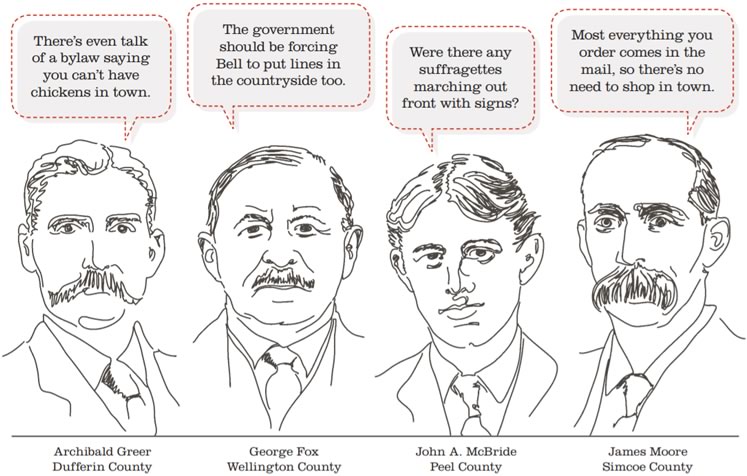 [Warden Greer passes out copies of the Orangeville Banner open to a headline reading, “Dead Town Is Always Shunned.”]

Greer  Support for local merchants. Storekeepers are saying these mail-order catalogues are going to hollow out the main streets. Who needs to shop in town if they can just order stuff? We all know if there’s no local commerce, our towns will die.

Moore  True, but catalogues have been around for years, and people really want them. What’s different today is every farmer’s got a mailbox now at the end of the lane. Free rural delivery began, what, two years ago? Most everything you order comes in the mail, so there’s no need to shop in town.

McBride  Even easier, my daughter ordered a dress out of the catalogue on the telephone!

Fox  That works if you got a telephone line! Try it if you’re in the country. Bell Telephone doesn’t want to bother with rural lines. Cities always get all the good services. The government should be forcing Bell to put lines in the countryside too.

McBride  But there’s all these independent phone companies running lines in the countryside now. According to the Conservator, there’s something like 400 of them. You’d think competition would make Bell smarten up.

Fox  Bell’s got the main lines though, so they really soak you if you’re with an independent. To phone Guelph from Erin is something like 25 cents.

Moore  25 cents! For that you could feed your backyard chickens a week or more!

Greer  Don’t get started on chickens! We’ve got spats going on in Orangeville about the stink when people don’t clean out their coops. There’s even talk about a bylaw saying you can’t have chickens in town.

Moore  Hope that’s strong coffee, John. When I heard you were hosting this meeting in Caledon East, I knew for sure we weren’t going to get beer!

Fox  Yes, my goodness, there’s a fence all the way around the Ontario House!

McBride  One around the Albion Hotel too. That’s local option for you. The village voted dry, so dry it is! Strange that alcohol is legal, but selling it legally has more rules than the Bible. I agree the fences are a bit much, but at least they went up peacefully. Not like the gunfire you had in Shelburne, Archie. Or dynamite in Orangeville!

Greer  That was 30 years ago. I doubt we’ll see protests like that again – unless running these big hydro lines through the countryside keeps stirring things up.

[All four begin to talk at once, but Warden Fox wins out.]

Fox  The Hydro-Electric Power Commission of Ontario! The name is almost as big as the power lines they’re putting up. You got to give Premier Whitney credit though. Everybody wants hydro and everybody agrees a provincial power grid is good …

Moore  … but nobody wants the power lines on his property.

McBride  Yes, but it’s government, even though Whitney says the commission is arm’s length, so the lines are going to go where they need to go. What bothers me is the commission was set up to build a power grid in the province, but now I hear they’re going to try to buy up local power companies like the new one we just got in Bolton or the Deagle power company over in Cataract. Think about it – one great big power company in Ontario controlling the hydro. That can’t be good.

Fox  Where’s Whitney going to get the money? First thing he said when he was elected was Ontario’s pot is empty because the Liberals spent it all. Still saying it, too.

Moore  Just political talk. A real bump in the road for Whitney is going to be this Regulation 17 they’re talking about at Queen’s Park.

Greer  Regulation 17? Never heard of it.

Moore  That’s probably because there’s hardly any French speakers in Dufferin. The rumour is there’s going to be legislation banning the teaching of French in public schools. I’m sure the Lodge brothers will approve but there’ll be hell to pay in the north end of Simcoe. Not to mention in Quebec. So much for provincial trade talks.

[An awkward silence at the table continues until Warden McBride changes the subject.]

McBride  Archie, I hear you just had Bishop DuMoulin over in East Garafraxa doing confirmations at the Anglican church in Reading. Were there any suffragettes marching out front with signs?

Greer  No, but I know what you’re getting at. It’s what DuMoulin said in a sermon last December in Toronto – that the best way to respond to suffragettes is with a hose, a hydrant and a bag of oats.

Fox  I heard about that and I think he was out of line. We got to face it, gentlemen. It’s pretty hard to argue that women shouldn’t vote. And sure, as soon as they can vote, they’ll be pushing for other rights too. But things are changing.

Moore  Yeah, before you know it we’ll be able to buy a beer in Caledon East!

Fox  Seriously though, the world is changing. I’ll bet a hundred years from now nobody’s going to believe the kind of stuff we have to deal with.

After the 2015 election, when Justin Trudeau famously promised, “Sunny ways, my friends, sunny ways,” he was reprising a phrase of Wilfrid Laurier’s that made headlines in the election of 1896. At the time, the Manitoba Schools Question was a hot issue. The province had joined Canada with a dual school system like Ontario’s, but was now proposing to ban Catholic schools (taught in French). In 1895 the courts ruled against Manitoba, but the province resisted, and the federal Conservative government set about to enforce the ruling with a heavy hand.

Liberal leader Wilfrid Laurier said he would approach Manitoba’s premier with “the sunny way of patriotism” and ask him “to be generous to the minority in order that we have peace among all the creeds and races …” The Liberals won the 1896 election and Laurier persuaded Manitoba to allow some separate schools. This did not sit well in “Orange” Ontario where in 1912 the government passed Regulation 17, severely limiting the teaching of French (which then became another contentious issue). 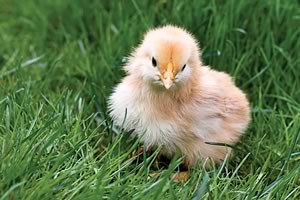 Our Own Eggs: Backyard Chickens

In a bid to become somewhat more self-sufficient, my husband and I recently decided to try keeping our own chickens for egg production.

The Need for Speed

We’ve been hearing about rural broadband for more than a decade. So where is it?