“Look!” you exclaim, pointing skyward. “It’s a hawk!” Or a falcon, or an eagle, or a vulture. We all do this, but do we really know? 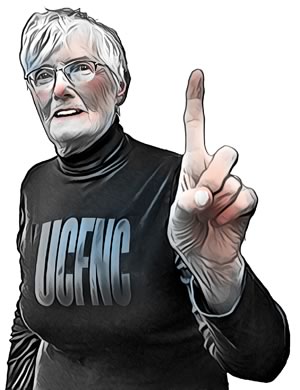 All are birds of prey, though the term may be misleading. Robins, after all, prey on worms. Raptors, however, are the true birds of prey: hook-beaked, long-taloned predators. Killers. What, where and how they kill, and how each is modified for the task, distinguishes the raptor species.

Hawk is a catch-all term that can, of course, include hawks as well as eagles, falcons, kites, vultures, osprey, kestrels, merlins and others.

It can get confusing. All falcons are hawks, but not all hawks are falcons. Both kill in broad daylight. Owls are a bit of an outlier, being nocturnal raptors, and vultures are questionable raptors, rarely bothering to butcher and preferring their dinner already dead. Clear?

When identifying raptors, look for shape, then size, then colour.

Eagles are the biggest of the “hawks.” Big bodied, with long, broad wings that have elegantly splayed “fingers.” And vultures are nearly as big, but darker, with long, broad, square-tipped wings.

Hawks are smaller and have shorter, broad, rounded wings as well as short tails for manoeuvrability when pursuing prey through trees and ground cover. Swooping and striking from high perches, they kill on the ground using their deadly talons. Superb soarers, they manipulate air currents with fanned tail and wing-tip fingers. White chests. Subtle spots and striations above.

Falcons (merlins, kestrels) are the smallest raptors and built for speed, with slim bodies, long, pointed wings, a long tail and short, rounded heads. They kill in the air, dive bombing other birds from above. White below, some colour above.

But none of this is set in stone. Immature birds are coloured differently. There are also odd migrants. Females are bigger than males, and a male may resemble a female from a smaller species. Ornithological bigwigs reclassify or rename species periodically. Birders throw away “always” and “never,” substituting “usually” and “rarely.” They also guess.

Though all raptors are carnivores, individual species are specialized hunters. And when desperate, they’ll prey on anything smaller than themselves.

So, are raptors bloodthirsty baddies? No. They kill only for sustenance and are part of nature’s plan to regulate species to sustainable levels. Raptors cull the weak, the sick, the inferior to the greater good health of both predators and prey, whether that prey is fluffy bunnies or unappealing vermin. Raptors have no enemies, other than humans – and bigger raptors.

Look up! And good luck! 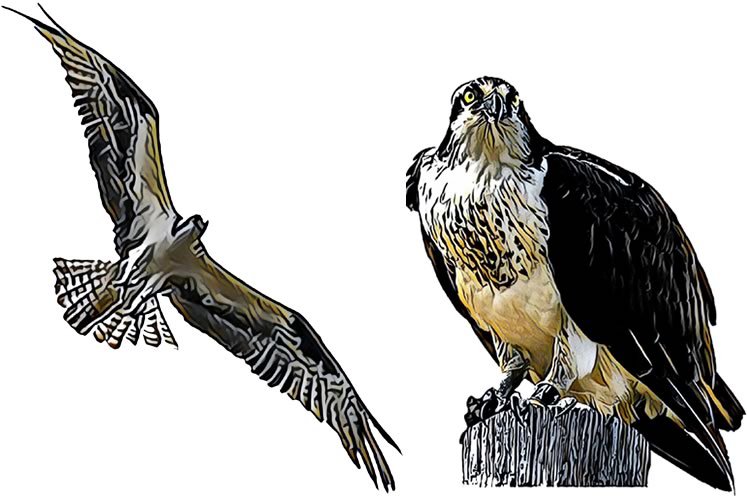 A big hawk. Almost eagle big, but with a smaller head. Grey-brown above. Seen from below, white-bellied where an eagle is dark.

With gull-like crook in a broad wingspan, ospreys, which dine almost exclusively on fish, haunt wetlands and open water (Luther Marsh and Island Lake, come on down!), circling and soaring to spot a meal near the surface, then taking it with a precipitous plunge, striking feet first.

They’re not stupid. They take care to grasp lunch face forward (better aerodynamically) as they flap low to the shore for a munch.

Unfussy homeowners, ospreys will nest on dead trees, hydro poles and satellite towers. Natural or artificial, anything tall, bare and solitary will do, as long as it’s near flat and wet. 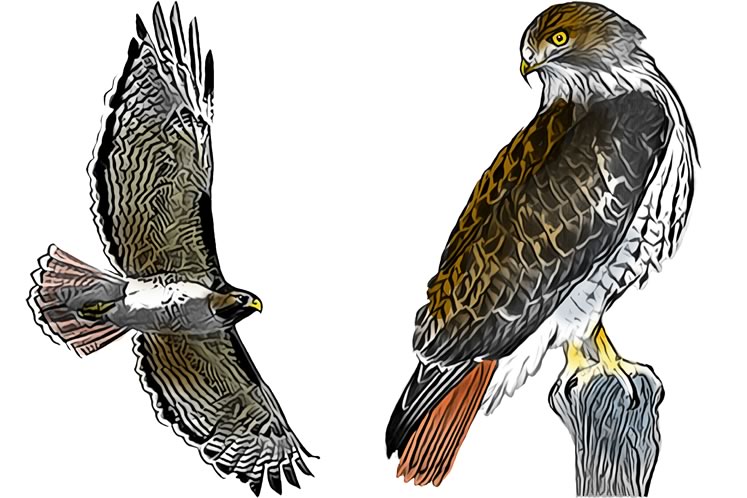 The greatest soarer. Often seen very high, in controlled hovers, patiently peering. Too sensible to dive bomb prey, it spots a meal, swoops to a high perch, then sweeps down, low and fast, to seize lunch.

Open land offers a seasonal smorgasbord – squirrels, groundhogs, pheasants, with sides of snake, bat or frog. Sometimes called “the farmer’s friend” for culling rodents, rabbits and voles, the red-tailed hawk might be called other names when it’s seen seizing a barnyard chicken. 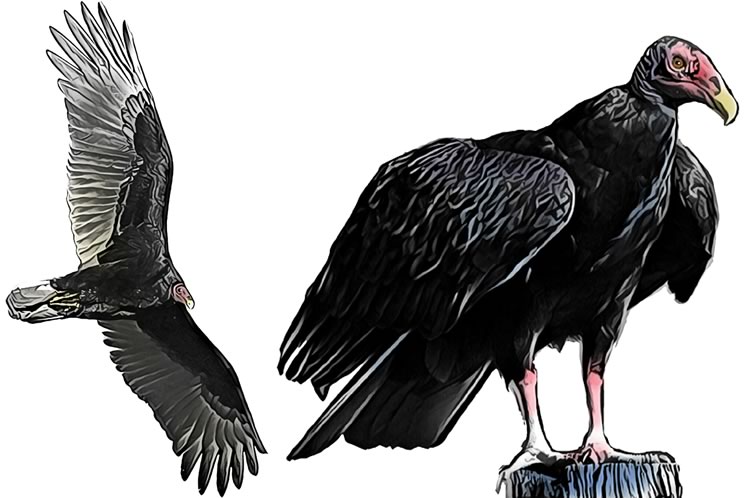 Turkey vulture
aka buzzard (in the u.s.)

Ugly. Face only a mother vulture could love.

Technically not a predator (they rarely kill), vultures soar in a clumsy, rocking flight over open country, roads and forests, and are a rare bird that hunts by smell more than sight.

Carrion connoisseurs, they prefer “recently deceased” to really rotten. They’ll stand on their meal, holding it with weakish feet while ripping with a rapier beak. Often with a dinner party of peers.

In spring and fall, the high open fields around the Museum of Dufferin area is a perfect place to see turkey vultures migrating along the escarpment. 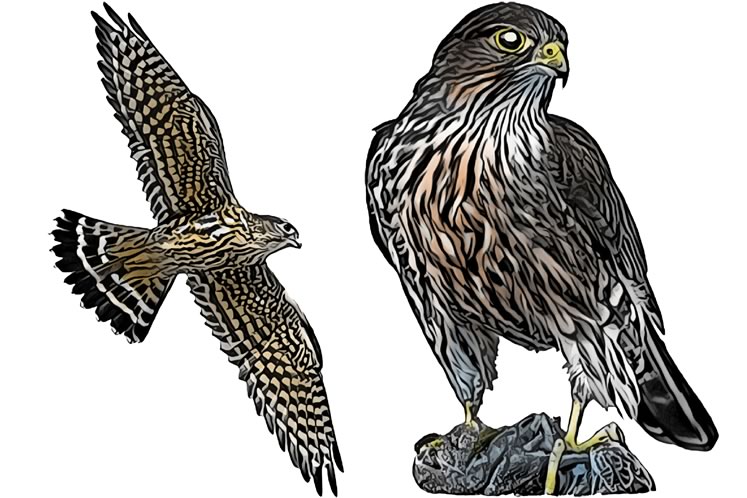 A hawk, but also a falcon.

Small, powerful and bullet-fast over open land, cultivated fields and beaches when pursuing smaller birds, waterfowl, swallows and pigeons. The merlin even harasses crows and ravens. Because it is so fast and cheeky, it can.

Now observed in cities, merlins are drawn to high perches from which they can spot unwary sparrows and birdfeeder dreamers. A pair of merlins were observed nesting in Orangeville, just south of Broadway. 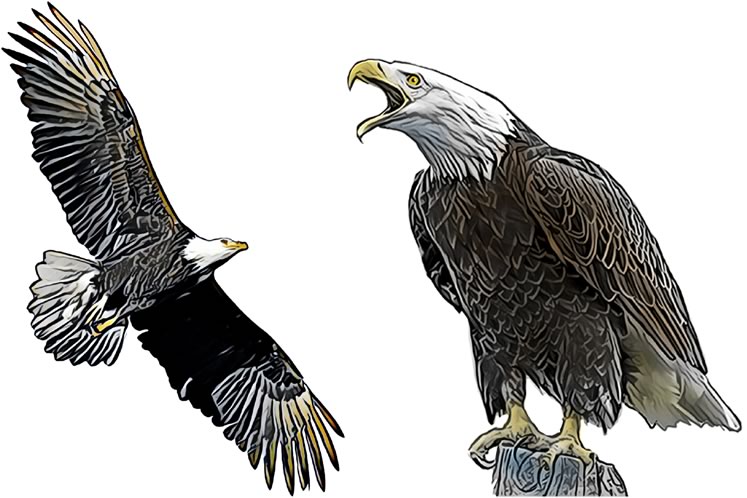 Majestic-looking, but less majestic in habits. Lazy (feeds on carrion if available) and an opportunistic harasser that doesn’t hesitate to steal the meals of other predatory birds, especially ospreys.

When it deigns to hunt, a bald eagle doesn’t dive like an osprey. It swoops, skims and grabs with its huge, razor-sharp talons. 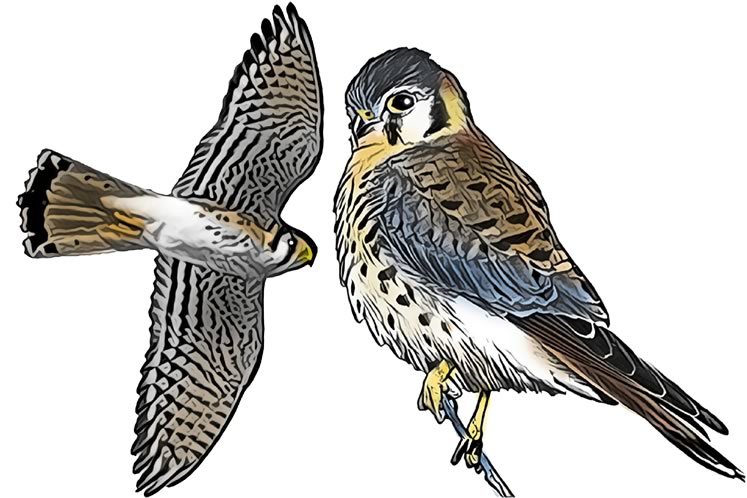 Small and slim with a large head and colourful bluish wings (males only), squared, rusty tail, swept-back speedster wings and two black slashes on the face.

A tail-pumping percher on fence posts and hydro wires by open country over which it is territorial. It will be noisily antagonistic to intruding hawks.

For all its ferocity, the American kestrel prefers bugs. Especially grasshoppers.

Moves with a choppy, “batty” flight, stalling to dive bomb prey, urban prey included, as kestrels have discovered the delights of starlings and bird feeders. 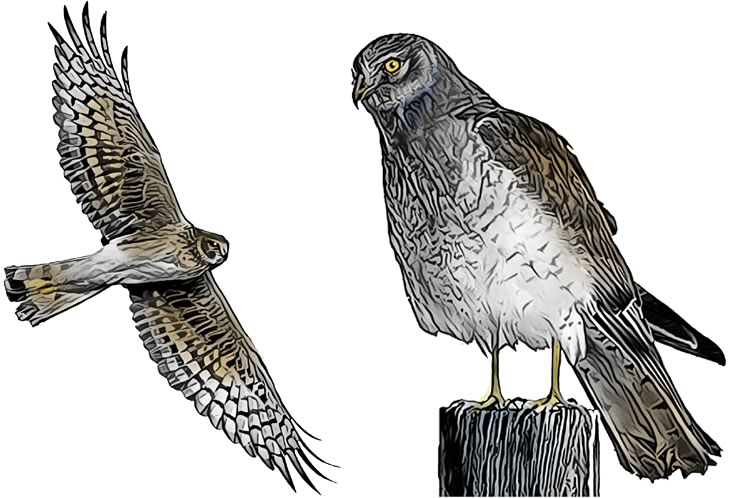 Smaller than the red-tail. Long-tailed, slender, long brown wings that are blackish at the tips. (Females are all-brown.) Owl-like facial feather disks enhance its hearing of scampering rodents.

Covers for its poor (for a hawk) eyesight with superb hearing and patience. Seen methodically flying to-and-fro grids just above open fields, marshes and grasslands. (Sparse trees? Okay. Forest? No thanks.)

Tilts side-to-side in flight, listening for prey hiding under low cover. Lightning fast and nimble in a chase. A mouse specialist, the northern harrier will also take moles, voles, chipmunks and squirrels. On a good day, a duck or rabbit may be the entrée. 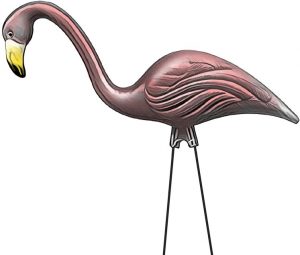 Not really. Just added to see if you were paying attention!

Anthony Jenkins is a freelance writer and illustrator who lives in Mono.
Add a Comment