Cannabis is once again a topic of avid discussion – where can you get it, what’s the best cultivar, is it worth growing your own?

A friend of mine recently pulled out his stash and rolled a joint. Holding it aloft, he grinned and announced, “My first legal weed.” And then he shrugged. In truth, it was all a bit of an anticlimax.

Like a few of my friends, he had smoked marijuana most of his adult life. The process required some planning – and cash – but for the most part sourcing a supply was as routine as a trip to the liquor store. And of course, as with alcohol, where and when it was consumed required a certain conscientiousness.

Which isn’t to say that legalization is not a big deal. Illegal cannabis fed organized crime, cost taxpayers vast sums to prosecute, and sidelined many thousands of young lives with criminal convictions for simple possession. Besides, while other countries are sure to follow soon, you have to be a little proud that Canada has led the way (after Uruguay and a few American states) in making the historic, and sane, move.

What legalization hasn’t changed, as Kira Wronska Dorward reports in this issue, is the actual consumption of the already widely used drug. Those who used to consume it still do. Those who didn’t still don’t. With one exception – people over 65. In other words, the baby boomers – who first experimented with pot during the cultural revolution of the ’60s and ’70s when smoking it was a rite of passage. (Though it’s certain I would have tried it at some point anyway, I smoked my first joint in May 1970 as a kind of personal act of solidarity with the four students who were killed by their own National Guard at Ohio’s Kent State University as they protested the bombing of Cambodia.)

For some of that generation, like my friend, smoking marijuana became a lifelong habit. Many others, like me, simply drifted away from it – especially as it became stronger and less predictable. But now? Now when groups of that aging demographic get together, cannabis is once again a topic of avid discussion – where can you get it, what’s the best cultivar, is it worth growing your own? It’s no longer about sticking it to the Man, though, or even getting high. It’s about back pain, arthritic knees and the pursuit of a good night’s sleep – but there’s also a little nostalgia, like welcoming an old friend back to your table. 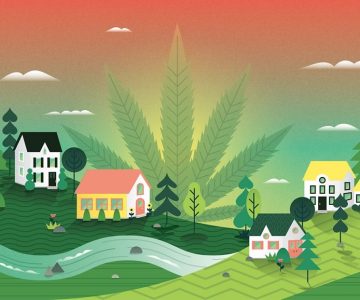 A year after cannabis was legalized, local residents and businesses are still trying to sort it all out.