There’s a fairy tale touch around every corner of Lia Parsley and Alex Panetta’s sweet Erin home. Woodland and floral motifs take up entire walls, there’s an enchanted garden out back, and two flaxen-haired princesses tumble about, indoors and out. At any moment you half expect a cute little tailor mouse or a bag of magic beans to appear.

It’s all by design and the handiwork of Lia, a vintage fanatic and style maven. Since taking possession in 2015, she’s transformed formerly generic 1990s interiors (lots of wood, taupe and dark granite) into a rustic-meets-mid-century-modern style for the couple and their two daughters, Lacey, 4, and Willow, 1 – and Hank, their beloved 8-year-old goldendoodle.

Alex and Lia moved to Erin when Lia was pregnant with Lacey to be closer to Lia’s family, who had made the weekend home they bought in 1994 south of Erin a permanent residence in 2002. Because Lia had spent time there, first on weekends as a teenager and then after graduating from university, the move felt like returning to a hometown. In Erin, Lia and Alex have created a strong family-focused life that centres around neighbourhood get-togethers, time spent at the local Tin Roof Café, Lacey’s preschool and dance classes, and a loving, helpful family blissfully nearby. Alex, VP of sales at a media tech company, commutes to Toronto every day, making family time on the weekends all the more special. And Lia loves the country roads they take to get “just about everywhere,” along with the quieter pace of life, especially compared to her years of big city living. 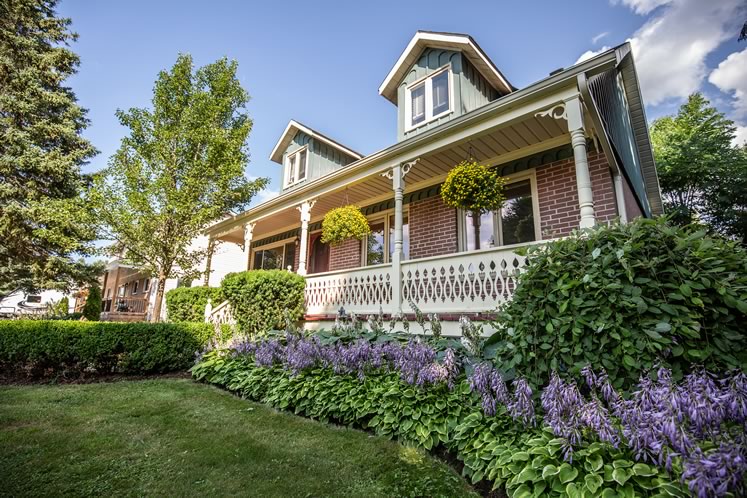 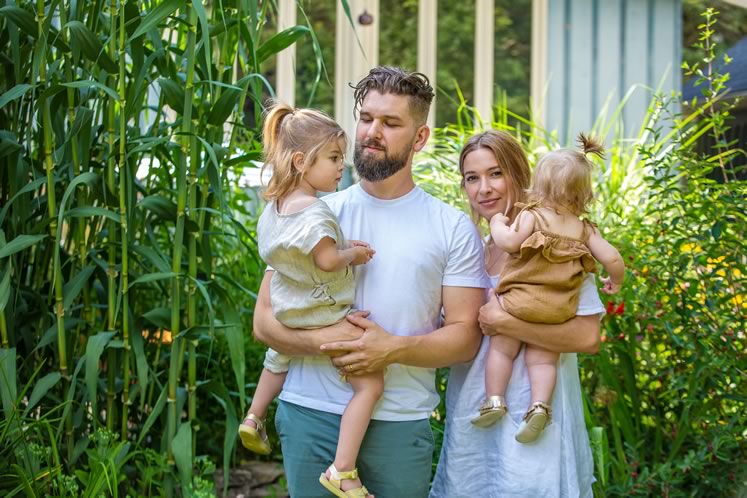 Lia and Alex with daughters Lacey, left, and Willow. Photo by Erin Fitzgibbon. 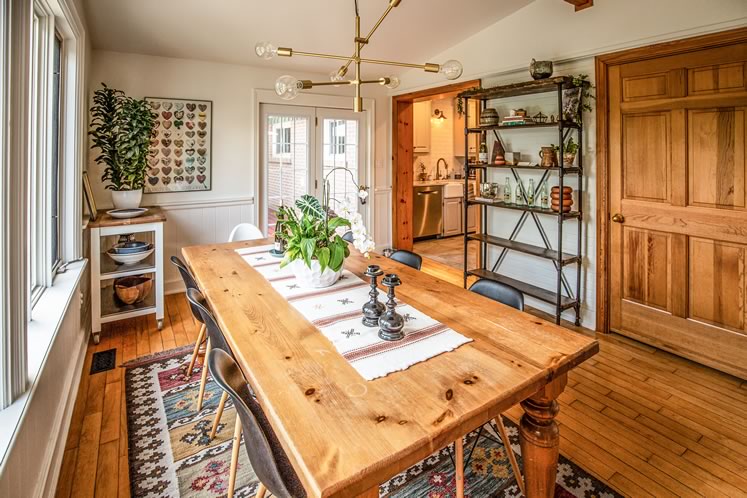 In the dining area in Lia Parsley and Alex Panetta’s Erin home, warm woods, pale walls and modern lighting and seating add up to a rustic-yet-modern vibe. Photo by Erin Fitzgibbon.

“Living in the country sets a tone for my day that is relaxed and at ease regardless of what’s thrown at me,” she says. “City life was inspirational for the hustle, and country life is inspiring for the space to breathe, think and create. As an introvert I’m much more suited to a quieter life at a home base, with occasional city ‘pop-ins’ to feel the pulse of the people.”

Thoughtful renovations include painting out all the interior walls, doors and trim, save for one exposed beam in the dining room, in warm whites and pale mauve-greys. The couple also removed the popcorn ceiling on the top and main floors, a labour of love that paid dividends in extra light and a sense of height. They enlisted local general contractor Lorne Sinclair in 2016 to renovate the kitchen in bright Shaker style and open it up to the children’s play area and living room.

Their next project, planned for this summer, is to redo the bathrooms. Downstairs will have a modern glass shower and large single vanity. Upstairs, Lia is going for throwback fun with penny tile and brass fixtures.

Style-wise, Lia’s background has come in handy. She started an online vintage clothing store in Austin, Texas, where they lived in 2012 for Alex’s work, and she continued it after moving back to Toronto. (The business is currently on pause while Lia focuses on family. However her Instagram account @liaparsley bursts with style.) 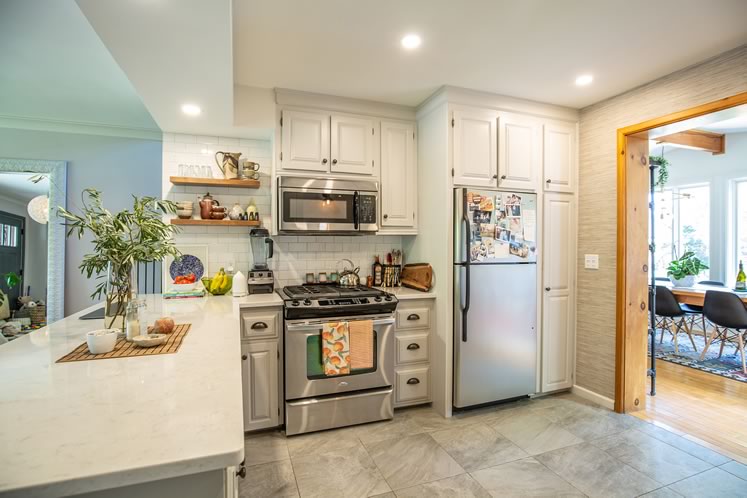 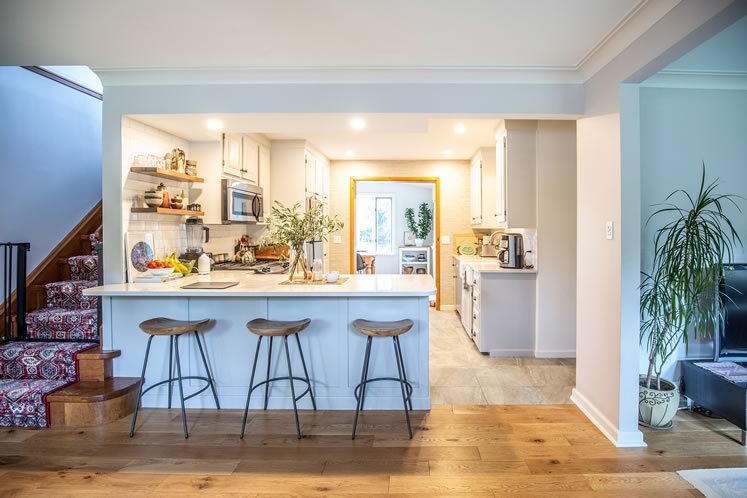 The couple opened up the kitchen to the dining and living areas. Photo by Erin Fitzgibbon. 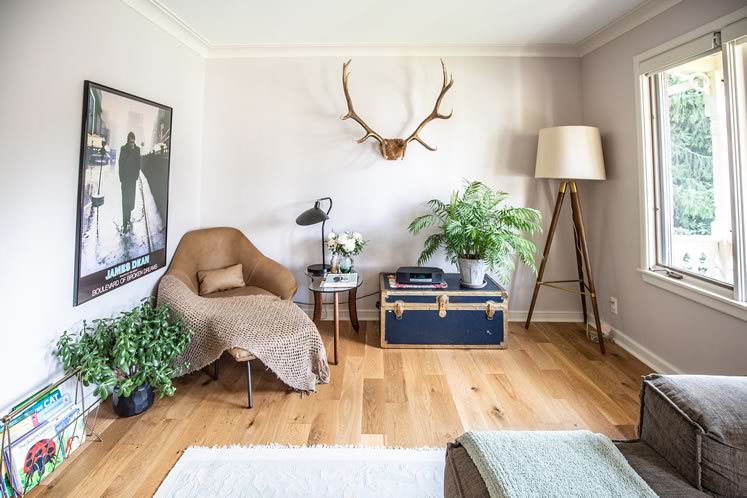 This corner in the living space reflects Lia’s eye for mixing collectibles like a vintage James Dean poster from an estate sale with a modern armchair and a chunky throw. Photo by Erin Fitzgibbon.

Many of Lia’s favourite pieces are vintage or thrifted. Take her beloved rugs, for example. The large dhurrie rug in pastel mauves (“the best of the 1980s!” Lia observes) in the living room was a downsizing gift from her mother and originally graced the family home in Toronto. Lia purchased the pastel desert sunset runner in Lacey’s nursery at an estate sale in Austin well before the pair even had children. She carefully tucked it away, knowing it would serve as the inspiration for a kid’s room one day. A faded burgundy Persian rug in the master bedroom from Guelph’s Rug & Weave is another cherished piece. “I love texture, warmth and cozy elements,” says Lia. “I feel that a great rug is the starting point to any room.”

The living room features two other great finds – a large James Dean poster picked up at a Toronto estate sale and elk antlers from an antique store in Austin. Lia bought their mid-century-modern wood bedroom set on Kijiji from a couple who had used it their entire adult lives. “I always remember to oil it and try to keep it knick-free to honour the previous owners.”

Speaking of former owners, Lia and Alex have the talented carpenter who lived in their home before them to thank for some of the fairy tale details. He hand cut all the decorative trim and performed many upgrades, including the additions such as the now-spacious dining room. The end result is board-and-batten Cape Cod style with a dash of Victorian gingerbread ornamentation. 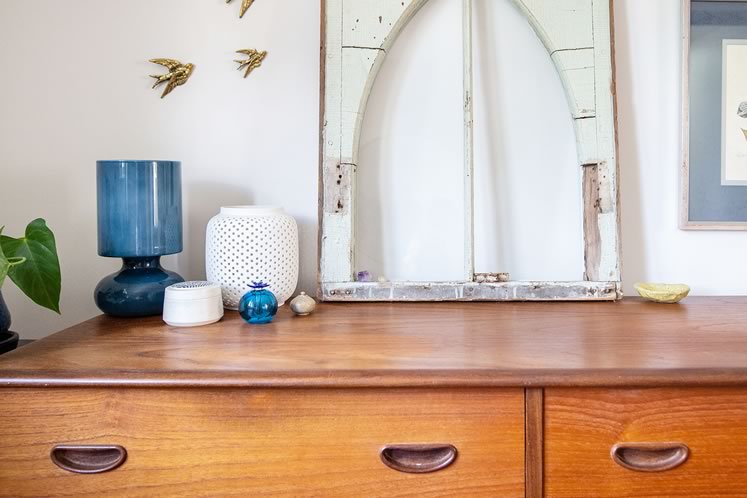 Other well curated items in the house include a beloved dresser in the principal bedroom sourced on Kijiji. Photo by Erin Fitzgibbon. 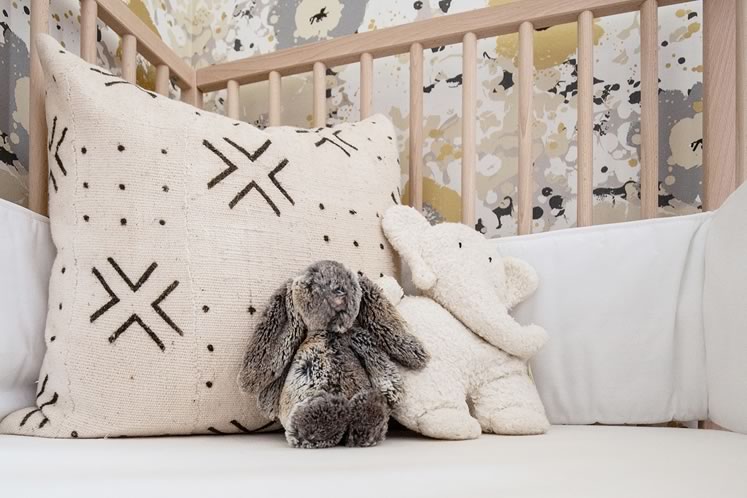 From her crib, Willow gazes up at a room wallpapered in a soft floral wallpaper from Anthropologie. Photo by Erin Fitzgibbon. 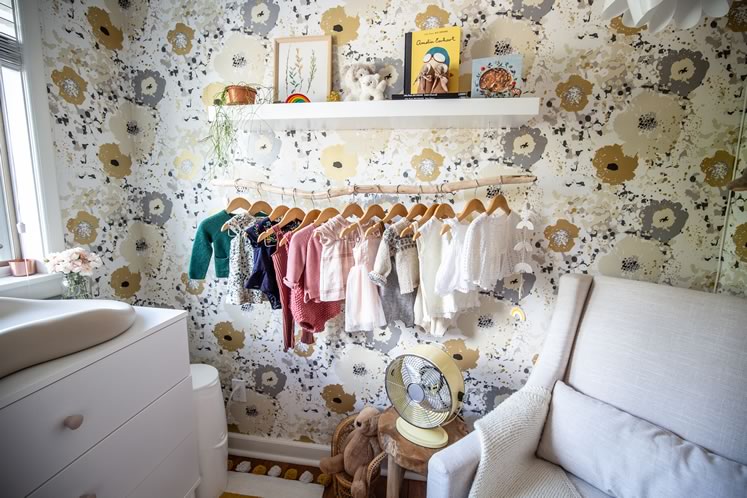 In Willow’s nursery, a hanging branch does the work of a closet. Photo by Erin Fitzgibbon. 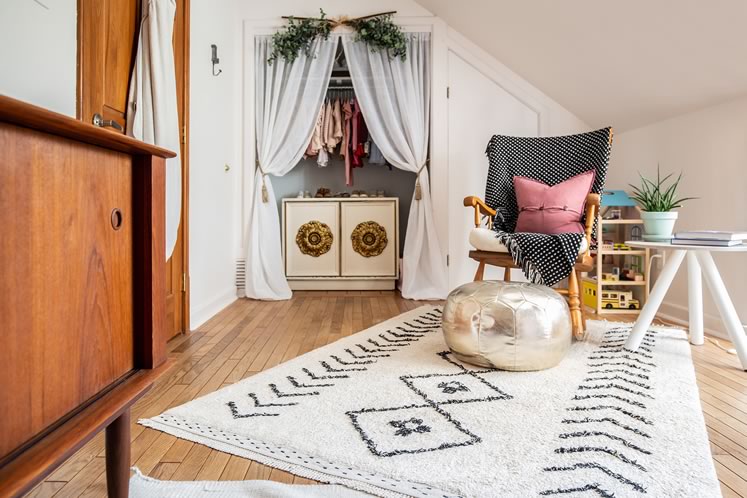 In Lacey’s room, an ivory and gold hutch that belonged to Lia’s grandmother sits in a reimagined closet. Photo by Erin Fitzgibbon.

Lia and Alex also gladly inherited a number of mature plantings in the front yard. Azalea bushes offer an “unbelievable show every late spring in fuchsia, orange, peach and yellow – it’s planted like a rainbow,” says Lia. The pair also eagerly anticipates the first blooms on their pear tree – a true sign that winter is over for another year. It promises to be a storybook setting for the girls’ first outdoor Easter egg hunt this year. (Until the landscape outside comes alive, earthy centrepieces by good friend Krystal Young of Snowberry Botanicals in Erin punctuate the indoors with lots of greens and subtle hints of colour on special occasions.)

Not surprising for a house with two little ones, the kitchen, living room and toy area get the most traffic. Lia’s advice for young families is to keep the play space as simple as possible to maintain an element of serenity even in the midst of chaos. This means banishing less visually appealing toys elsewhere (here, it’s a basement space downstairs). She also recommends durable materials. The couple chose quartz over marble for their kitchen countertops: “We’re not about the patina and wouldn’t want the extra worry with marble.”

Her final advice is not to rush. Lia encourages taking time, years even, to find the right items, a mix of vintage and new. She admits she completed the nursery mood board for Willow, her youngest, mere hours after finding out she was pregnant.

In both girls’ rooms, typical closets have given way to whimsical alternatives. In the toddler’s room, where they removed the closet to make way for a bigger bathroom, Alex carved a branch Lia found into a chic hanging clothes rod. “It’s really amazing to see how much her bedroom resembles the picture in my mind. I knew the wallpaper I wanted (from Anthropologie), I had the idea for the branch closet, and everything else fell into place organically.” In Lacey’s equally clever closet is a French country ivory and gold hutch. It belonged to Lia’s grandmother, who was stylish but also extremely thrifty – a trait she passed on to her granddaughter. 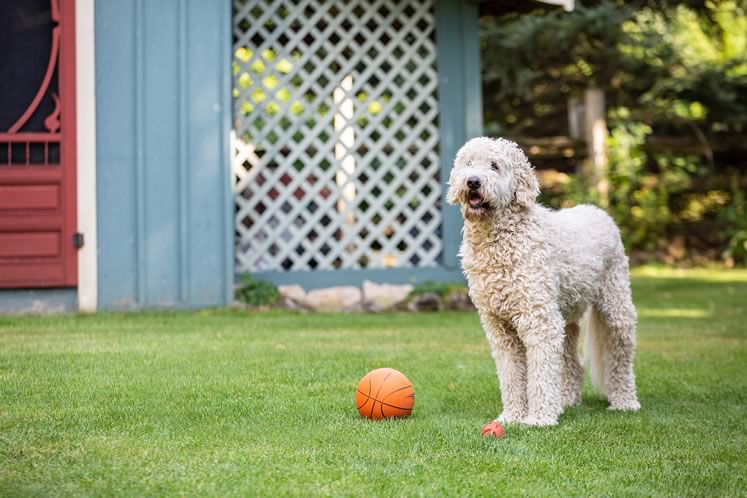 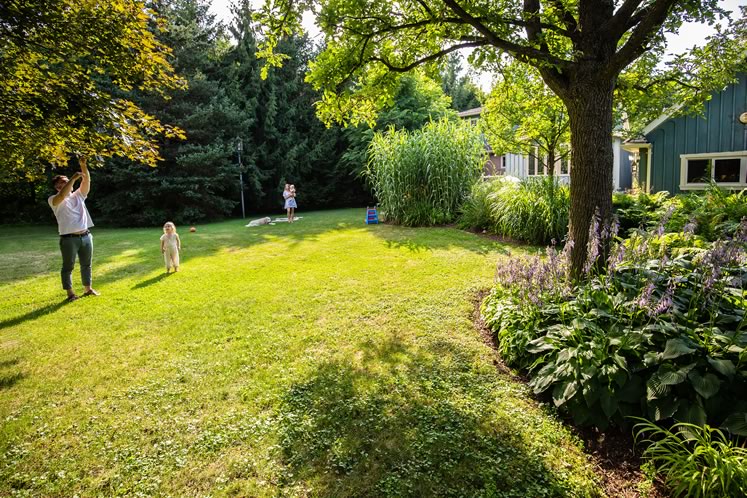 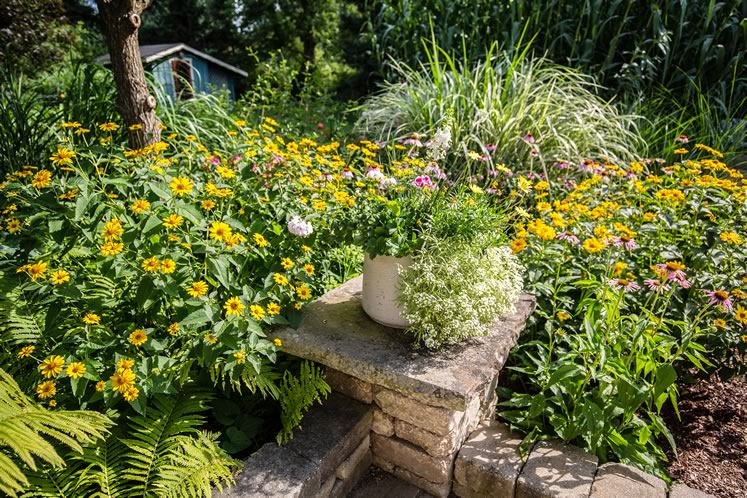 In the summer the couple’s gardens are awash in colour. Photo by Erin Fitzgibbon.

The goal for both rooms was to be playful yet refined. Lia plans to repurpose the mid-century credenza in Lacey’s room as dining storage later on. And although Willow’s room is small, Lia envisions a small desk and single bed in there one day soon.

“For both, I wanted to evoke a bit of childhood magic, a special place for them to retreat each night that’s filled with family memories and imaginative vignettes.” Each appears to be sprinkled with more than a little happily-ever-after fairy dust – so mission accomplished.