Our forebears knew how to put sunshine in a jar. You can too.

When my wife, Susan, and I lived in Toronto, we would go early on Saturday mornings to the St. Lawrence Market on Front Street. We would often buy small steaks, eggs and fresh bread for a late morning brunch. On the north side of the market, we always stopped at a booth toward the back, where a man sold his own jams and jellies. We really enjoyed his raspberry jam, but our favourite by far was his apple jelly. A beautiful, delicate pink colour, it had a perfect light jelly texture. He even poured a layer of paraffin on top, sealing it the old-fashioned way, but most important, the jelly tasted as if we had just picked the apple from the tree. 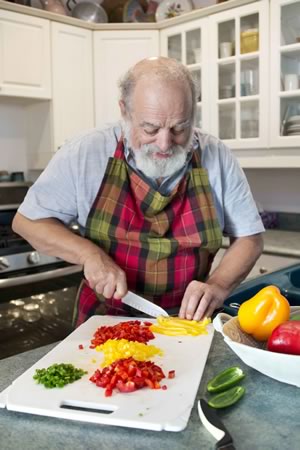 Writer Tony Reynolds waited a long time to fulfill his fantasies of preserving the harvest, but now he is a dab hand. Here he prepares to make pepper jelly. Photo by Pete Paterson.

This experience sparked the idea of making my own preserves, and over the years I made a few successful forays into the world of homemade jams and jellies. One afternoon, after we’d moved to the hills, we went out to the fields behind our home and found enough wild strawberries to make a batch of jam. It sure takes a lot of those little things to fill a quart box! I cheated a bit and put in some store-bought berries to bulk things up.

We have also picked wild black raspberries for jams and “put down” other produce, such as pickled beets. For a very short time, I even thought about pickling butternuts. The recipe was in a homesteading book I had. The process involved boiling immature butternuts in changes of water until the boiling liquid stopped turning black, then putting them down in pickling brine for a year or more before tasting. As if the wait weren’t sufficiently daunting, I realized I’d have to pick young butternuts from the 40-foot tree in our front yard. Nope. I didn’t even know, after risking life and limb, whether we’d like the taste. So that idea went no further.

My on-and-off preserving endeavours changed a couple of years ago when Susan gave me a maslin pan from Lee Valley Tools for my birthday. It is beautiful – stainless steel, with a thick, heavy base and a flare, like a teacup, up to the rim. It measures 8 inches in diameter at the base, 12 inches at the top.

The pot is not named for its designer, as I first thought. The word maslin derives from Old English and apparently refers either to the mixture of grains used to make gruel in the pot or to the mixture of metals used to make the pot itself. Whichever, it looked perfect for the job, and I wanted to put it to good use. But I had to wait until preserving season, which wasn’t far off – my birthday is at the end of February. In the meantime, I searched online for recipes. Pinterest is a gold mine of ways to add new twists to old favourites.

Fortunately for those eager to get the preserving season underway, some of the growers whose produce is available at farmers’ markets here push the season in greenhouses and the like, so their produce is available earlier than expected. Lennox Farm, north of Horning’s Mills, forces rhubarb, for instance. The greenhouse at Besley Country Market in Shelburne ensures Evan Besley’s tomato season gets a jump start. And Sun-Ray Orchards of Beamsville has raspberries at the Orangeville Farmers’ Market both before and after the regular season.

That first season after receiving the maslin pan, I bought flats of berries and baskets of peaches. For a little zing I added slivers of habanero peppers to one batch of strawberry jam, and little pieces of jalapeño pepper to the peach jam. Ah, peaches.

I remember many years ago opening home-jarred peach halves in a light syrup – a gift from a home economics teacher I knew. We were deep in the valley of winter. The wind was howling, the snow was blowing and it was as cold as a well digger’s toe. When I opened the jar and took the first taste, it was as if the sun had come and melted winter away. Overstated? Not a bit. So of course, I had to put down some peach halves. They were as delicious as I remembered, and I made a few batches. Even after giving some away, we had enough jars of sunshine to warm us throughout the next winter.

As the growing season progressed and tomatoes ripened, I bought a food mill and made passata, a purée of plum tomatoes (San Marzano variety, if you can get them). The tomatoes are skinned and passed through the mill to eliminate the seeds, which can add a bitter, astringent taste. Some passata recipes call for lightly cooking the tomato purée before processing. But for a fresher taste and colour, I prefer jarring it fresh, then processing the jars in a water bath. Passata is a wonderful start to Sunday pasta sauces, cream of tomato soup and so on. It, too, brings some sunshine to cold winter days.

The water bath is straightforward, but there are details about timing to consider to ensure your preserves are well sealed and will keep until you open the jars. Recipes usually specify the time needed to boil jars after they’re filled, and it’s worth paying attention to those details. The companies that make mason jars (Bernardin or Ball, for example) are good online sources. So is Public Health Ontario.

The hot water process has been around since Nicolas Appert discovered how to safely feed Napoleon’s armed forces in the early 19th century, but many people now use steam, which saves water and energy. There are pots specifically made for that process. There are also pressure canners (different from pressure cookers) that sterilize preserves under pressure. Now that’s a pot, like my maslin, that looks as if it can do the job!

Whatever the process, the most rewarding part is when you hear a pretty little ping as the hot air in the jar cools, creating a vacuum that seals the lid.

Oh yes, I did make apple jelly … sort of. Last fall, a friend brought over a couple of bags of wild apples in various shapes, sizes and colours, from nearly white and light yellow to a dark, winey red. They looked perfect. I must admit I wasn’t patient enough to let the juice drip (so slowly) through the cheesecloth (jelly makers, cover your eyes), so I squeezed the cheesecloth just a little. Actually, quite a bit. Obviously, the results were not as refined as the St. Lawrence Market product, but they were tasty – and just for fun I put a sprig of thyme in each jar before processing.

Experience has taught me a few things about canning and preserving, and I’ll no doubt continue to discover more. I now attach my labels to the lids of the jars, for example, to avoid having to scrape them off the glass later – and the lids are replaced anyway. But the most important lesson may be to read and follow directions precisely. When the instructions say, for instance, “Boil hard for one minute, stirring constantly,” don’t just count to 60. Use a timer and stir as if you mean it. If you let up or skimp, you can end up with something more like sauce than jam or jelly. Go too long and the texture can resemble an India rubber ball. Unfortunately, you won’t know the outcome for certain until the jam is jarred, processed and cooled to room temperature.

I once got distracted from a batch of peach jam and boiled it so long it began to darken and smell like caramel. I had to throw it out and expended a lot of soaking time and elbow grease to clean the hardened sugar off the bottom of the pot. It’s all part of the learning process. It’s all fun, and in January I get to pop open a jar of summer sunshine. There’s nothing like it.

The nice thing about this recipe is that it can be made year-round with hothouse peppers. You can vary the colour from yellow to green to red by changing the proportion of the various sweet peppers, and you can change the heat by using more or less jalapeno, hotter habanero or even Scotch bonnet peppers.

My preserving skills have a long way to go to match the expertise and output of the pros. Here are three examples of local folks – Barb Vivian, aka Mrs. V, Connie Arteaga of Connie’s Kitchen and Rebecca Landman of Landman Gardens – who have taken preserving to another level. Click on the links below for three of their best recipes.

You’ll find more in the Headwaters Farm Fresh guide (see the summer 2020 issue of In The Hills, or headwatersfarmfresh.ca) and still more at farmers’ markets and local retailers. 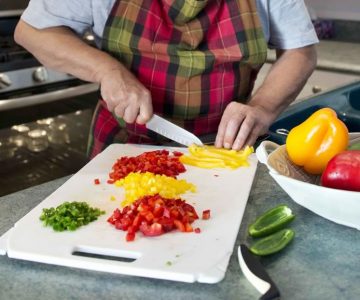 This sweet and spicy pepper jelly is a perfect accompaniment to a cheese and charcuterie platter. 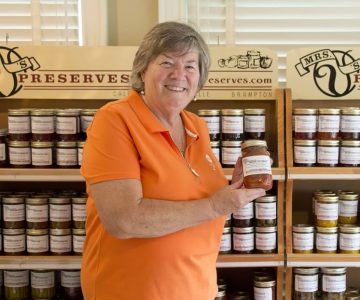 Barb Vivian’s jams, jellies and sauces are a staple at local farmers’ markets. This mild chili sauce is named for her mother-in-law. 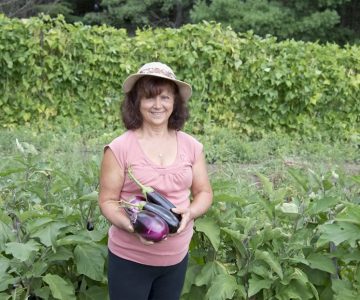 Many of Connie Arteaga’s long list of handmade preserves – think passata or eggplant antipasto – have their roots in her native Sicily. 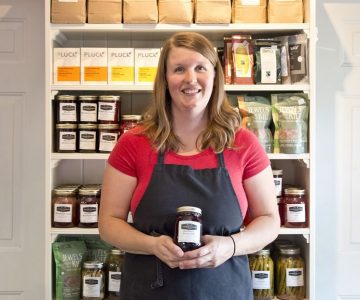 Rebecca Landman leans on family recipes for her canned offerings such as bread-and-butter pickles, corn relish and barbecue sauces.