I didn’t say these words out loud when Fred Welsh, my snowboarding instructor, announced that my lesson was over. But I did throw up my hands in a celebratory wave. What I actually said was, “Great lesson. Thanks.” Fred replied that I could stay out on the hill to practise. An avid boarder, he probably couldn’t fathom my reasons for electing instead to salute my lack of injury with a coffee in the lodge at Hockley Valley Resort. 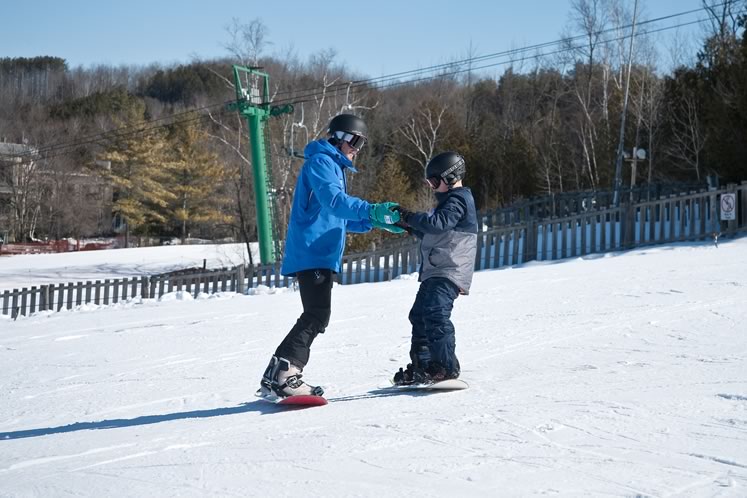 I had often thought about trying my hand – or foot – at snowboarding. I’ve skied most of my life and envied the smooth elegance of boarders. Their long sweeping turns remind me of a rhythmic waltz, like that performed by Yul Brynner and Deborah Kerr in The King and I: 1, 2, 3 … 1, 2, 3 … 1, 2, 3. Skiers, on the other hand, make it down the slope in the common 4/4 metre of pop music. Think Bruce Springsteen belting out “Born to Run.”

I was also intrigued when Belfountain resident Renée Holden told me she stayed much warmer snowboarding than skiing because boarding is far more physical. Looking for a challenge, Renée switched to boarding from skiing about 15 years ago. And though she has recently returned to skis, she said, “I love the acceleration you get when turning a snowboard.”

Despite Renée’s enthusiasm, I was nervous. Thoughts of a broken wrist or a bruised tailbone – or both – crowded my imagination. I couldn’t shake the fear of heading downhill with both feet attached to the same board. How could I keep my balance if I couldn’t put out a foot to catch myself?

Yet last winter, on a bright sunny day at noon, I found myself walking alongside Fred. Carrying a Burton board and fitted out in special boarding boots and a helmet, I promised myself I’d play it cool. I wouldn’t let on I was anxious. But I couldn’t stop myself. I blurted, “I’m not going to break my wrists, am I?” Before Fred could reply, I added, “Having both my feet attached to this board terrifies me.”

Fortunately my 23-year-old teacher was already an old pro, a seven-year veteran instructor at the resort. He assured me, “I’ll keep you safe. Don’t worry.”

After a quick introduction to the board and some practice turning it around with my left foot attached and my right foot free, Fred encouraged me to glide down the tiniest of tiny slopes. It felt like I was tackling Denali!

Next he showed me how to get the board to turn and come to a stop: “Keep your weight over the board. Bend your knees and separate them. Keep your head up. Look where you want to go. Don’t look at your feet.”

I was awestruck when I looked over my left shoulder as instructed and my board followed. Then, copying Fred, I brought my board to a full stop by putting weight on my heels, thereby forcing the back edge of the board to dig into the snow.

We then climbed partway up the hill, and he helped me slip down with my board perpendicular to the slope and one foot still free. That I could do.

“It’s time to take the magic carpet up the hill,” said Fred. Yikes, I thought, but he coached me up the conveyor belt, too. At the top he explained how I was to sit and harness my second foot to the board. My anxious-self screamed, “No, not two attached feet!” Fortunately, this time my anxious-self shared the thought only with me. I did as instructed and followed Fred’s advice on how to manoeuvre myself to stand from a sitting position. Harder than you think when both feet are fixed to a board. With perspiration building under my winter jacket, I was beginning to understand what Renée meant when she said snowboarding is physical.

When Fred encouraged me to repeat the side slip, but this time with both feet locked in, I looked downhill from what might as well have been the summit of Mount Everest. But you know what happened, of course. Fred guided me down the hill, explaining, “Toe down and you accelerate like in a car. Heel down and you decelerate.” And heck, it worked – like a charm. Thinking about accelerating and decelerating, remembering to look where I was going and keeping my knees bent and wide apart, I forgot my fear. At the bottom, I looked down. Whose feet are these? They can’t be mine; they’re attached to the board!

“Let’s do that again,” said Fred, brimming with enthusiasm.

This time I pushed off down the hill with more conviction. When Fred let go of my hands (did I mention he held my hands the first time down as he boarded along in front of me?), I found my centre of gravity. I didn’t exactly knock it out of the park, but I did get down that mountain … I mean “hill” … on my own. More important, I did it without breaking a wrist or bruising my tailbone. And my success triggered a euphoric sense of accomplishment, an experience that becomes all too uncommon as we leave childhood. We tend to stick to the things we know. Play the sports we’re good at. Avoid risks – and anything that could lead us to make a fool of ourselves.

That’s one of the things I love about sport. It can push you to run an extra kilometre or hit through for a backhand winner or try not only a sport that is new to you, but also one that terrifies you.

The latest book in Nicola Ross’s Loops & Lattes series of hiking guides focuses on trails in the Collingwood, the Blue Mountains and Beaver Valley region. Nicola lives in Belfountain.

Snowboarding in these hills

During the time of Covid, the situation at Headwaters ski and snowboarding resorts may be fluid. Check websites for updated information and coronavirus protocols.

At Mansfield and Caledon ski clubs, snowboarding, snowboarding lessons and equipment rentals are available only to members and their guests:
mansfieldskiclub.com
caledonskiclub.com