Fashion or comfort? Caledon friends and swimwear designers Velvet Haney and Rachel Manley believe you can have both.

Do you ever get up in the morning, look in the mirror,and think, Is this for real?

Initially lockdowns allowed us freedom from the scrutiny of others. Lazy attire was okay. With nowhere to go and only our nearest and dearest as witnesses, what was the point of fussing? 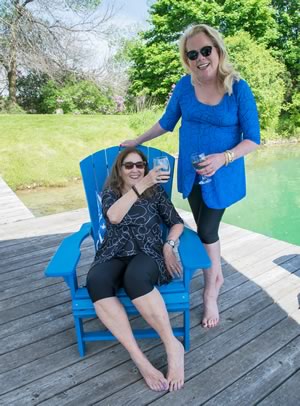 Velvet Haney (left) and Rachel Manley show off the swimwear they designed for women “who aren’t at Woodstock anymore.” Photo by Garland Haney.

Perhaps a few pandemic pounds appeared, or there was some weight redistribution or, in the absence of the regular six-week root touch-up with the hairstylist, the uncoloured roots took over – until they simply couldn’t be called roots anymore.

I am gradually getting used to my new, natural hair colour, but as I went from summer gold to winter silver, the shades in my wardrobe were no longer compatible with my colouring, which means my closet needs a drastic makeover. And it’s not just the colours. Nothing seems to fit anymore. Things hang where they should fit – and fit (snugly, mostly) where they should hang.

But of course, that shopping spree has been on hold.

By the time we reach our 60s, 70s and beyond, I think we’re all on a spectrum when it comes to personal body image. Some days we assess our body strictly by its appearance; others we judge it by how well it performs everyday activities.

On days I lean to appearance anxieties, I confess if I were to slip in the shower, I’d be less worried about a few broken bones than about my rescuer seeing my naked torso. And on days when I’m preoccupied by performance, I obsessively focus on achieving my daily 10,000 step goal, rather than settling for the number of steps I accumulate by roaming around the house in the never-ending hunt for my glasses (usually on top of my head) and cell phone (always where I last left it).

But mostly, well aware of the futility of angst, I strive to be philosophical about my aging body and try to ignore the sags and creases. That’s easy enough in the winter, when I’m buried beneath my woollies, but it’s harder in the summertime.

As Covid restrictions relax over the course of the next few weeks, I’m looking forward to invitations to backyard pool parties or perhaps cottages. And that means revealing this melting body in something that allows for frolicking in or near water. What to do?

A few years ago, Caledon resident Velvet Haney, 66, and her good friend and business partner, Rachel Manley, 73, were pondering this very dilemma over wine. Velvet, a writer, cartoonist and former fashion model, was doodling on a napkin as they chatted, laughed and lamented about the problems of fitting their aging bodies into skimpy bathing suits.

When the two took a closer look at the doodle, they realized they might be onto something. The napkin doodle became the basic design for what has become a line of swimwear for women who, as the tagline of their new company reads, “are not at Woodstock anymore.”

“We created the design for ourselves initially,” says Velvet. “But as our discussions continued, it became clear that we could support every woman’s choice if we offered a flattering swim dress to the public.” And so Bathing Boomers (bathingboomers.com) was born.

Velvet freely acknowledges that neither she nor Rachel, a poet, professor and author, had any idea how to start a business, but they gamely persevered, meeting each challenge, and then taking the next step forward.

“We tinkered with the basic design, chose fabric, colours, determined sizes, made sense of the financial side of things and just kept moving ahead,” she says.

Their bathing dresses are now shipped to all parts of Canada. “Women don’t have to scramble for a cover-up when they wear one of our suits. The upper arms and a good part of the legs are covered, and the design minimizes the look of the midsection. Our suit camouflages the primary ‘problem areas’ of the senior woman’s body,” she says.

Velvet and Rachel are currently in talks with a local manufacturer and have plans to offer smaller sizes and perhaps a complementary shirt design. In the meantime, they are still having fun moving their project along and living up to their mission statement, which is “to help camouflage a life well lived.” For the two, it’s all about offering choices.

Sure, as we get older, comfort tends to trump fashion, but who says we can’t have both? It’s all very well to accept, even celebrate, our aging bodies for what they are, but being comfortable in our skin sometimes means keeping some of it under wraps. After all, fashion has always been about giving a tweak here and there to improve or conceal what Mother Nature gave us.

Our toned, athletic bodies may be a thing of the past, but carefree fun at the beach doesn’t have to be.