The 10,000 hours of practice that writer Malcolm Gladwell ruled necessary to become an expert in anything are manifest underfoot outside the studio of Mono sculptor Jim Menken. 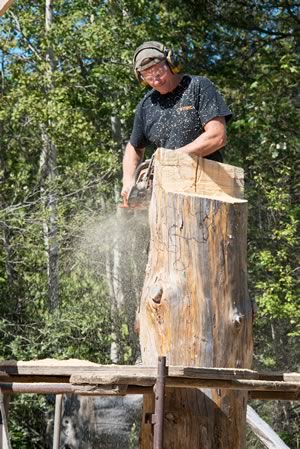 A soft beach of sawdust spreads in all directions, its sweet smell on the wind that ruffles the surrounding cedars and poplars. On this pre-pandemic day in 2019, Jim’s next work, destined to join many of his others in Orangeville’s Art Walk of Tree Sculptures, still slumbers in the horizontal forest of grey logs bordering his beach.

Jim picks a log from among the pack like a sommelier picking a perfect vintage. He hauls it out and stands it upright with the help of a geriatric, once-orange tractor. Then, battered ball cap tilted back on his head, he circles the 10-foot-long trunk. He’s serious, searching the artistic possibility beneath the fluttering strips of bark and fist-like knots, seeking a start.

A week later the log is bereft of bark, mottled caramel in colour and shedding sprays of sawdust which garnish a pipe-and-plank scaffolding and the sculptor who stands atop it. Jim wields a chainsaw surely and swiftly in the late summer sun, coaxing a cat, a larger-than-life-size descending cat, from within a roughly sketched Sharpie outline near the log’s top.

He carves off slab-sized blocks of not-cat, deftly flicking them away with the tip of the chainsaw’s blade. An amber arch emerges. A few minutes later, as he works with a smaller, nimbler saw, it becomes a tail.

“It’s all about confidence,” the carver says. “It’s about matching your cuts, making them meet. You don’t want to overcut and slice into a tail.”

Jim re-sketches the feline and carves further. The blocky form is becoming feline. Jim’s angular chops are becoming strokes, increasingly more fluid and sinuous. Later, after he considers a couple of protruding knots further down the log, a second cat’s outline is shifted slightly to avoid them, and the reclining form of a third cat emerges further below.

As he begins to employ an arsenal of ever-smaller Dremel saws, grinders and wheels, his pace slows. Tools which whine, not roar, now smooth and caress. They comb furrows of fur from the wood. The carver’s head is cocked in thought with each refinement until, finally, it nods in approval. Done. It’s taken about seven working days. 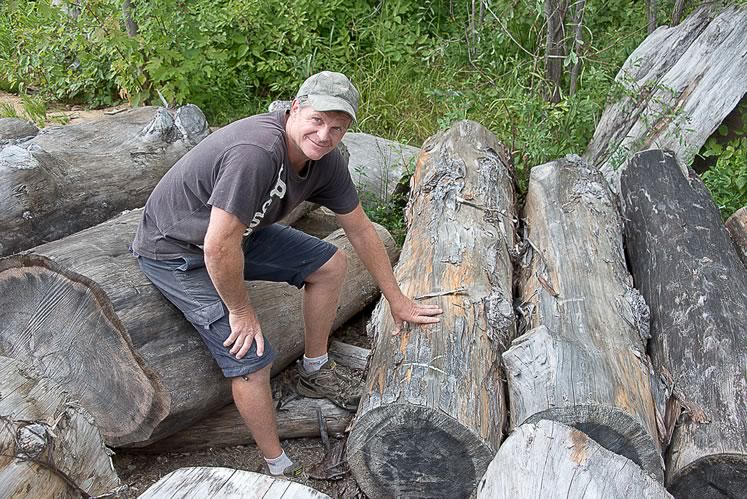 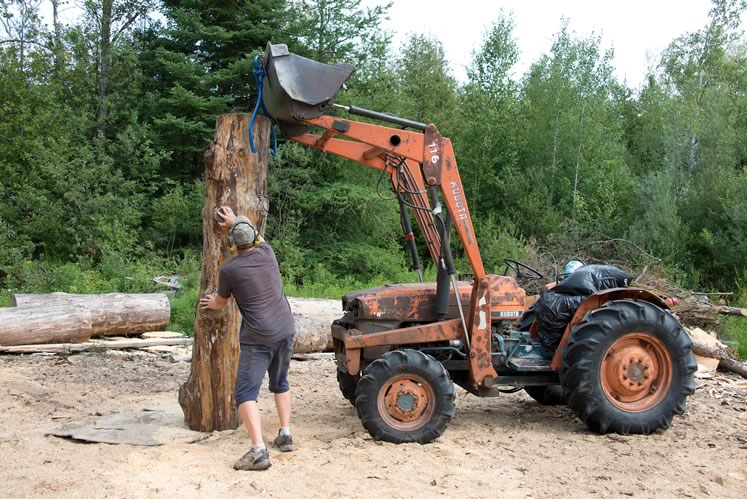 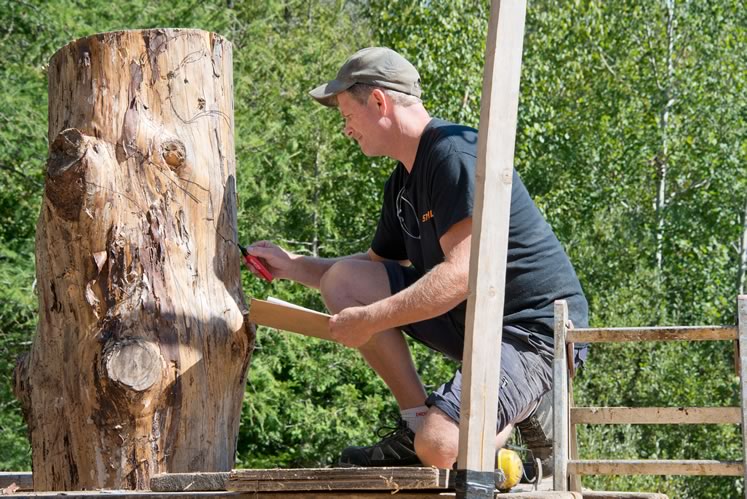 Jim Menken at work on “The Cats,” a sculpture in tribute to the feline companions of Lynn and Dan Lubitz. Photo by Pete Paterson.

“I hope it turns out,” Jim said earlier, during a blissful, chainsaw-down silence. Does he have any doubts about that? “No,” he responds immediately with a laugh, shaking off a layer of sawdust.

If you call Sheila Duncan, communications manager for the town of Orangeville, “Mother of Sculptures,” she’ll laugh, too. But she agrees, “They are my babies. Each one has its story and I’ve been involved with them all.”

Alongside her other duties Sheila manages the town’s tree sculpture program – currently about 50 outdoor carvings gracing Orangeville’s neighourhoods and boulevards. She sees to replacing deteriorating ones (a couple a year, lifespan about 10 to 15 years), monitoring and maintaining existing ones, and commissioning new ones.

Why tree sculptures? Community engagement and a tourist draw, she says. Bus tours do come, and Orangeville’s Visitor Centre will provide people to do commentary, Sheila herself, on occasion.

In 2003, then-mayor Drew Brown saw historic tree sculptures in Truro, Nova Scotia and thought, “Why can’t Orangeville do that?” So they did. Beginning in 2004, Jim Menken, an artist but a novice with a chainsaw – a fact he didn’t hide– was commissioned to carve the farmer that still stands outside McDonald’s on lower Broadway.

The town annually budgets $5,000 to ensure at least one new sculpture each year. Businesses or citizens can also sponsor a work. In fact, more than half the sculptures been privately sponsored. The town provides the concrete pedestal (which greatly increases longevity), the labour to erect and maintain each sculpture, and also promotes them with a digital tour on its website and social media.

Sheila vets a concept (historical figures, animals and birds are favoured), assesses the site for practicalities (will the carving impede snow clearance or disturb buried infrastructure?), and checks with neighbours (“We want it to be a positive experience. You’re going to be looking at this thing for a long time.”)

A concept is agreed upon and a budget confirmed ($2,000 to $4,000 per commission, depending on complexity, with a tax receipt for the donor). An artist is contacted, a sketch delivered, and delicious anticipations unleashed before any chainsaw is put to work in a sawdust-strewn studio such as Jim’s.

Lynn and Dan Lubitz have made their home on Zina Street in Orangeville for the past eight years. Across the street on a neighbour’s lawn stands a tree sculpture featuring two dogs, pets of the Staley family. The Lubitzes admired it, and regularly noticed passersby doing the same. “This was the kind of neighbourhood we wanted to move into,” Lynn says. “The sculpture contributed to that.”

A couple of years ago, a big maple on their lawn decided to grow sickly, town arbourists decided it should be felled, and the squat stump left helped the Lubitzes decide to replace it with a tree sculpture. Of playful cats. Their cats, Oliver and Sydney. When they learned the sculptor would be Jim Menken, the same carver who’d done the dogs, they were thrilled. “We’d heard about him from so many people. He’s so well respected in town,” says Lynn.

They sent Jim colour photos of their cats. (The carving would be stained rather than painted, because staining lasts longer.) Jim produced a sketch, and the Lubitzes “suggested, not insisted on” adding a third cat, their departed pet, Curtis.

On a chilly, wet day a few weeks later, the finished work arrived unceremoniously at the Lubitzes’ home on the back of a municipal works truck. Jim and two town workers with a backhoe wrestled the sculpture onto its concrete pedestal. 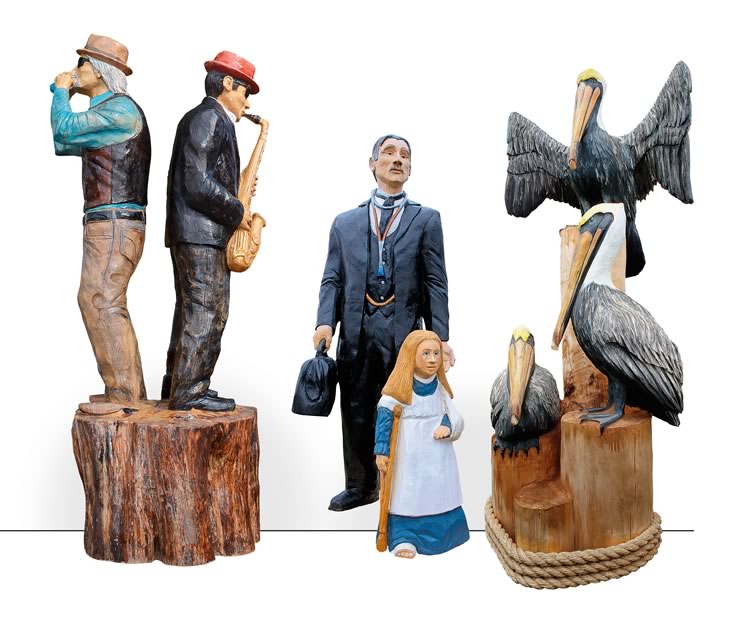 Jim Menken has contributed more than 30 works to Orangeville’s Art Walk of Tree Sculptures, including from left, “The Musicians,” “Physician and Patient,” and “Pelicans.” Photos courtesy Town of Orangeville.

Never mind the weather, though. Seeing the finished carving in place was a sunny moment for the Lubitzes. “It was a once-in-a-lifetime experience!” Dan says. Lynn, who has now viewed the sculpture from her office window for two years, says, “It brings a smile to my face at least twice a day.” She equally enjoys seeing so many others stop and admire it. “Unlike just enjoying it yourself,” she says, “it’s for everybody to enjoy. It’s a community experience.”

You can find a map and digital tour of Orangeville’s Art Walk of Tree Sculptures under Walking Tours at orangeville.ca 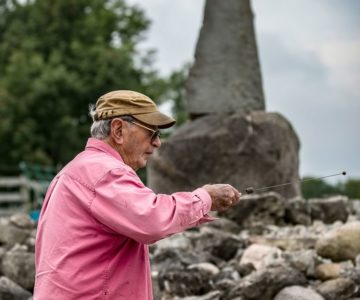 Stones are the inspiration for Joe Burchell’s monumental works of art.