Stones are the inspiration for Joe Burchell’s monumental works of art.

Rock has been the cornerstone of Joe Burchell’s world for most of his life. 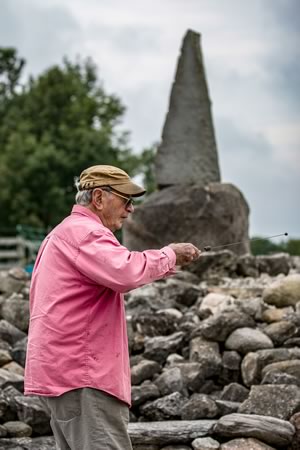 Joe Burchell uses a dowsing rod to commune with the energy of the Earth. Photo by Kerry Knudsen.

“The bulk of my career was spent blasting through rock,” he says, “primarily to get it out of the way. But in my retirement years, my biggest joy has been time spent understanding their form and function, while creating monuments with, and to, them.”

The self-deprecating style of this amazing 90-year-old makes the duality of his relationship with rock seem normal.

In 1954, with a new degree in mining engineering from Queen’s University, Joe began his working life in the sales department of the explosives arm of C-I-L (Canadian Industries Limited), headquartered in Montreal. As his career evolved, he became something of an explosives expert, initially travelling throughout the Americas and eventually around the world as he helped blow up rock in search of ore deposits or to tunnel through mountains to create highways.

Joe’s 24 years with C-I-L included moves to Sudbury, Elliot Lake and back to Montreal, as he continued to make his way up the corporate ladder, eventually into the office of vice-president. During that time, he was offered the position of CEO of the Atlas Powder Company, an American firm, and he and his wife, Trudy, moved to Dallas.

But the Burchells wanted to keep a connection with Canada, so they bought a weekend retreat in the Eastern Townships of Quebec, a haven they would treasure for more than 14 years. When Joe retired in the early 1990s, the couple continued to spend their summers in the Townships while wintering in warmer climes.

With consulting work still available to him, Joe made a pact with himself that any money he earned would go back into the local arts community. Throughout their time in Quebec, he and Trudy managed to put together an impressive collection of local art.

Around that time, he met Eddie Heath, a transplanted American, former football player and sculptor who became Joe’s gateway into his own creative side.

Eddie worked primarily in marble but viewed all stones as things of beauty. With a nod to Joe’s curious side, Eddie suggested that his friend learn the discipline of dowsing, best known to most of us for its association with using a dowsing rod to witch for water.

Courses in dowsing in both Vermont and at York University followed. Using a wood-handled length of spring wire with a knob on the end, Joe asks the apparently inert device an energy-related question. The device appears to respond with a variety of motions that he then interprets. For Joe, the energy generated is a useful guide to the artistic expression of the stone.

“The essence of dowsing is in the connecting to the stone’s own energy,” says Joe. “Consider that both coal and uranium give off energy. A piece of quartz can power a radio signal that can reach out forever. Our present-day world is powered by silicon chips, so is it such a stretch to think ancient people hadn’t discovered that energy?” This thinking is why he often calls his creations “Neolithic art,” to honour the Stone Age peoples who used the earth’s energy to guide their activities and travels. 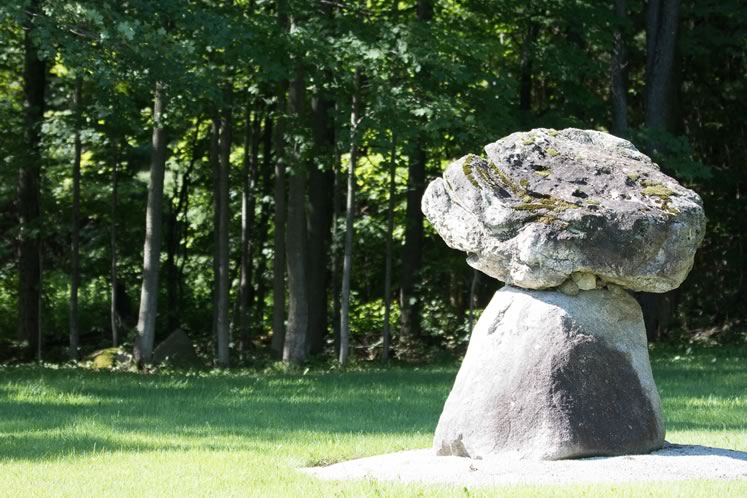 A stone sculpture by Joe Burchell. Photo by Kerry Knudsen. 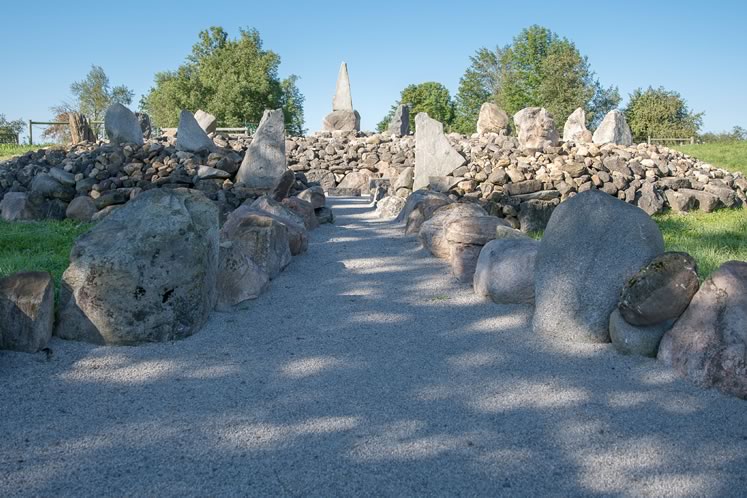 A stone circle Joe Burchell carefully erected on his Caledon property. He transported many of the stones when he moved from the Eastern Townships in Quebec. Photo by Kerry Knudsen.

Using a backhoe to dig out a stone, Joe then takes time to consider how it will fit in a stone structure. While serving his artistic apprenticeship in the Eastern Townships, he discovered that the obvious look of a stone is not always the best. He learned to twirl massive boulders with a tine of his backhoe in order to visualize them from every angle before finally settling them in place.

But it was after his move to Caledon in 1999 that he came into his own, and his creativity was released.

The move itself was memorable. Much to Trudy’s chagrin, when all Joe’s earth-moving equipment and each of the unique boulders he couldn’t bear to leave behind were finally packed up and ready to go, three dual axle gravel trucks, each pulling a flatbed trailer, were full to the brim and ready to make the in-tandem trip to the couple’s new home in Caledon.

“The toughest lessons I had to learn while creating one of my pieces,” Joe says, “is that the location of the structure has equal importance to what it is I do with each stone. If there is sky behind the structure, then the final view will have impact.” 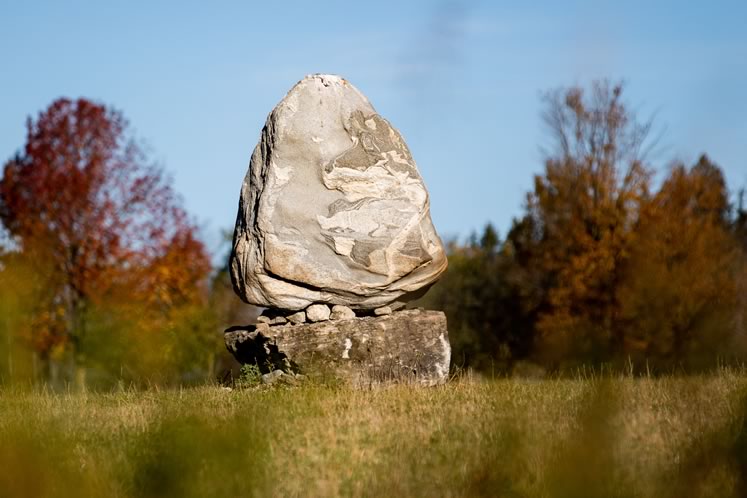 A stone sculpture by Joe Burchell. Photo by Kerry Knudsen.

Some of his inspiration comes from stone monuments and structures he has seen in his travels; some comes simply from the shape of the stone itself. Many of his creations are studies in texture and form; others are suggestions of beings. And some are simply landscaping devices.

“It takes time to put a sculpture together, adding one piece at a time over the course of months until the final form reveals itself. These things evolve and can’t be rushed,” he says.

Postscript: Tragically, this past February, Covid-19 took the life of Trudy, Joe’s beloved wife of 68 years. Joe also contracted the disease. He is still recovering.