The couple who owns this sleek contemporary home feel lucky to roam its generous, well-appointed spaces. But it’s where and how the all-black structure sits on the landscape that has wowed the husband-and-wife duo since they first encountered it. Set into the crest of a sloping Mulmur hillside, the inky structure melds with its environment and offers a front-row seat to the changing seasons. “The outside is the focal point,” says the wife in an interview. “I never tire of the views; the sunsets and sunrises are different every day.” 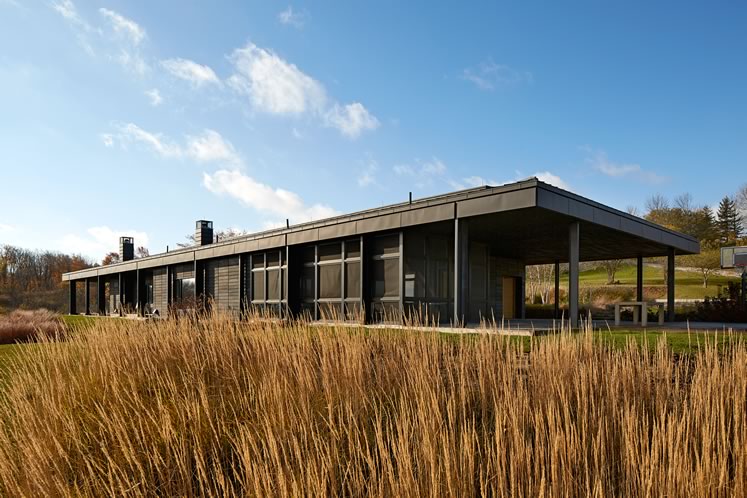 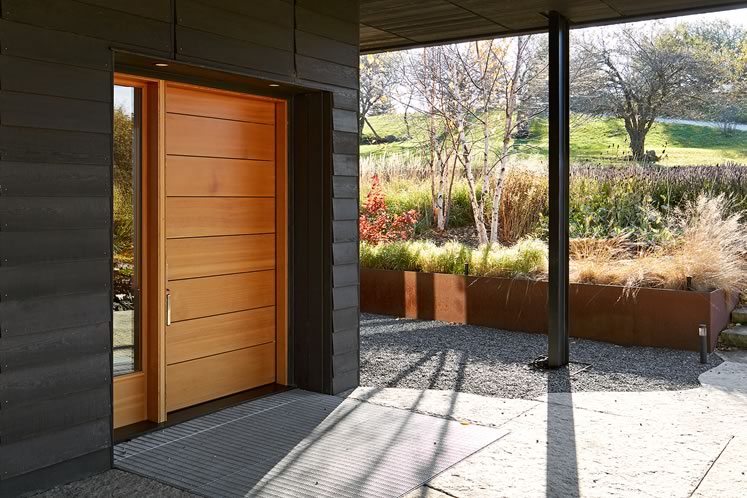 The home’s simple covered entryway frames a view of the gardens to the west of the building. Photo by Ben Rahn. 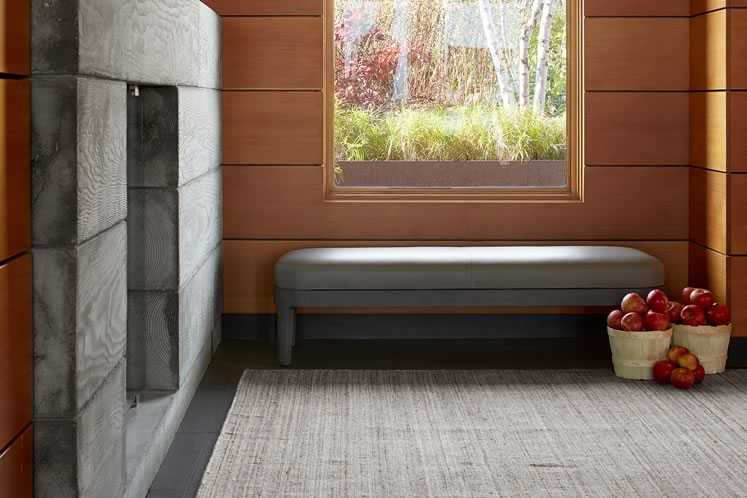 Inside the front door, visitors are greeted by the first of many Douglas fir panels lining the walls. A leather Molteni&C bench hints at the spare Italian furnishings inside. Photo by Ben Rahn.

And while long walks with their two chocolate Labs on just under 90 acres of land is no doubt a top-tier way to experience those vistas, being inside barely breaks their line of sight. One of the home’s most striking design elements is its giant picture windows on all sides of the roughly 4,000-square-foot main floor. In the kitchen and family room area, broad glass panels act as portals to grasses and perennials so close as to appear like the stars of gigantic terrariums. From the living area and screened-in porch, the windows frame an eastern landscape stretching to Alliston. Still, somehow, “Even when people are outside, you feel a sense of privacy inside which is an interesting achievement,” she says.

In one sense, the breathtaking location was what these two successful Toronto professionals had been looking for – a rural property within a short drive of their home in Toronto. The pair owns a vacation property outside Canada, but as their kids – a blended trio of a teenaged son and two twentysomething daughters – get older and face more demands on their time, bringing everyone together closer to home became a priority. (And this was before a pandemic grounded flights and cancelled travel plans.) “We just wanted a place where we could all gather – we didn’t have a particular location in mind,” she recalls.

As they began the hunt, the idea was they would shop for land and build their dream home from the ground up. The plan was to build something contemporary, but nothing that would jar with the landscape. In autumn 2019, when they laid eyes on the place, their plans to build from scratch seemed suddenly redundant. 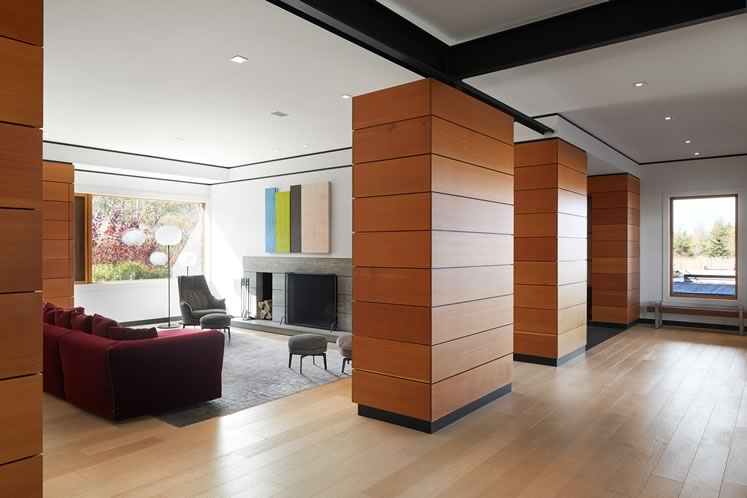 In the family room, the large window appears to box in the plantings outside. The family room sofa and the chairs are via Toronto’s Italinteriors. Photo by Ben Rahn. 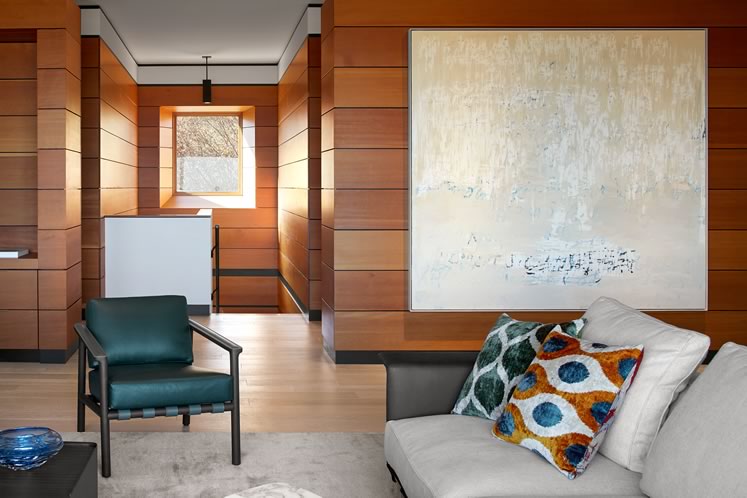 A love letter rendered in paint by the late Sarnia-born artist John Brown punctuates a wall of panelling near the stairs to the lower level. Photo by Ben Rahn. 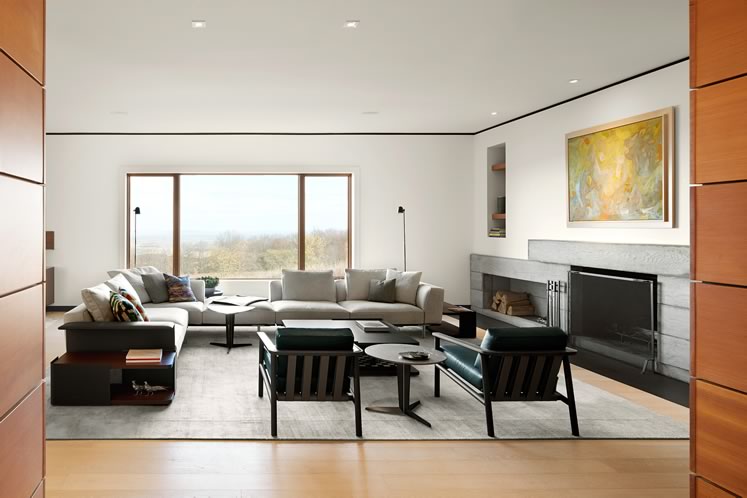 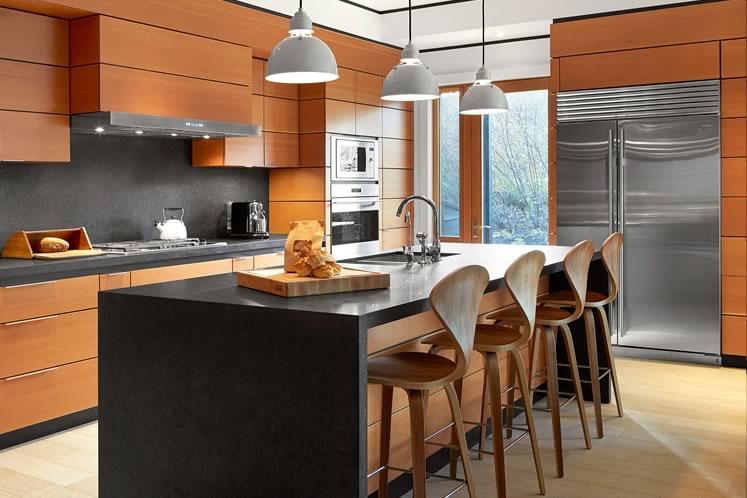 The horizontal lines of the Douglas fir panelling were expertly matched to run seamlessly from the kitchen to the hallways and beyond by Creemore’s J.W. Gordon Custom Builders. Photo by Ben Rahn. 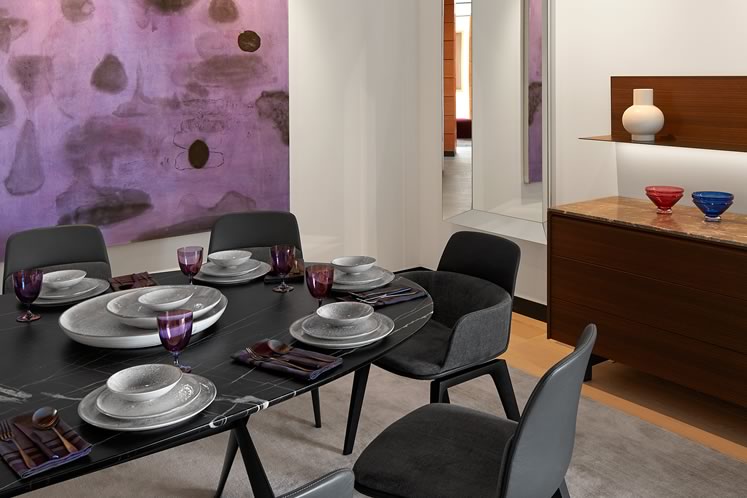 Touring the five-bedroom home on a postcard-perfect October day sealed the deal. “The real estate agent told us we would never see it looking nicer,” the owner says. “She was right. We drove down this half-kilometre drive and the sky was cobalt blue, the fields were golden, the leaves had just started to turn, and we then saw that black zinc roof. It was stunning.”

At first glance, the building appears to be a bungalow, but there is an expansive lower floor beneath the main which includes a den area with its own kitchen.

Work began for the previous owner almost 15 years ago and involved various architects including Steve Abrams of IBI Group Architects and Donald McKay, both of Toronto. John Gordon of Creemore-based J.W. Gordon Custom Builders, who dubbed the home the Black House, completed the interior construction in 2015. John is responsible for ordering, cutting and installing the warm B.C. Douglas fir panelling throughout the home. It was crafted to create seamless horizontal lines between rooms. “It makes the house. What he did was next-level,” the owner says, adding that John is now working on a guest house to match the mother ship.

The owner says one of her favourite ways to view the house is from below. “Looking back up, it looks like it could be a line of trees. It’s doesn’t interrupt or impose on its surroundings.” Nestled into the hill and protected by deft landscaping, the house is built to withstand the whistling Mulmur winds. John, who has built many impressive homes in the area, agrees the siting of the house is phenomenal. He adds, “The whole house is dialed in with the elevation. It’s positioned to take full advantage of the panoramic views and yet offers comforting protection from the prevailing wind.”

After the sale closed in early December 2019, the couple turned to their friend and longtime Toronto-based designer, Bill Mockler of William Mockler & Associates, to ask if he could get at least enough décor – most importantly beds! – ordered and delivered in time for the family to spend Christmas there. He succeeded. His broader assignment: The owners wanted nothing that would overpower or visually clutter the space, i.e., no look-at-me statement pieces. They needed chic furnishings, but only those that could handle lots of people and those two chocolate Labs. “We like it low-key and comfortable. Nothing should be louder than the people in the room,” the owner says. “It just works.”

Still, aficionados of contemporary Italian design who know their Molteni from their Minotti will envy the owners’ collection of modern yet inviting sofas, chairs and other pieces. Bill says if you’re looking for high design that is anything but cold, a country known for its fabric mills is hard to beat. “They’ve been creating and sewing fabrics for clothing and upholstery for centuries,” he says. “The manufacturers I used have a long history of impeccable workmanship and quality. I don’t think you can go wrong.” (Well, that might not be true when it comes to shipping logistics. Bill likes to tell the story of two chairs in the family room being mistakenly shipped from Italy to New Zealand. “Well, at least it’s close,” Bill quipped to the bearer of that bad news before ensuring the new ones were shipped from Europe. Pronto.) 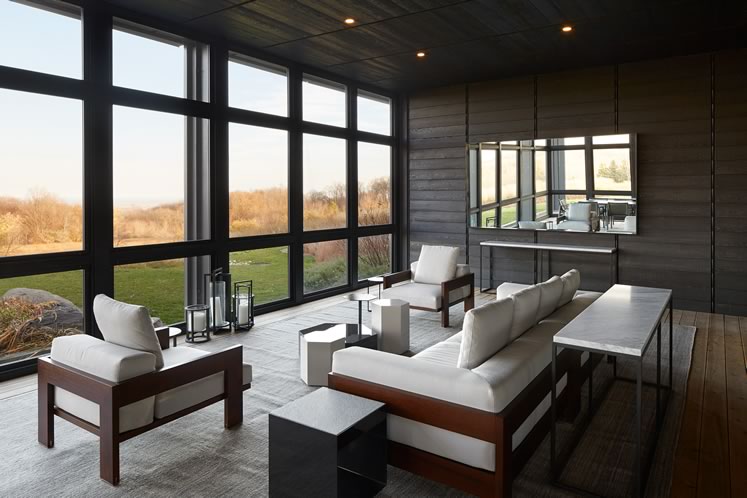 In the screened-in porch the seating and ceramic tables facing the wall of windows are by Minotti. Photo by Ben Rahn. 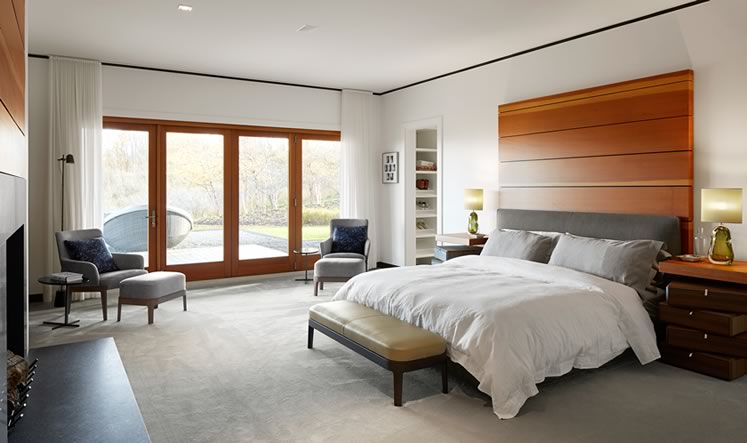 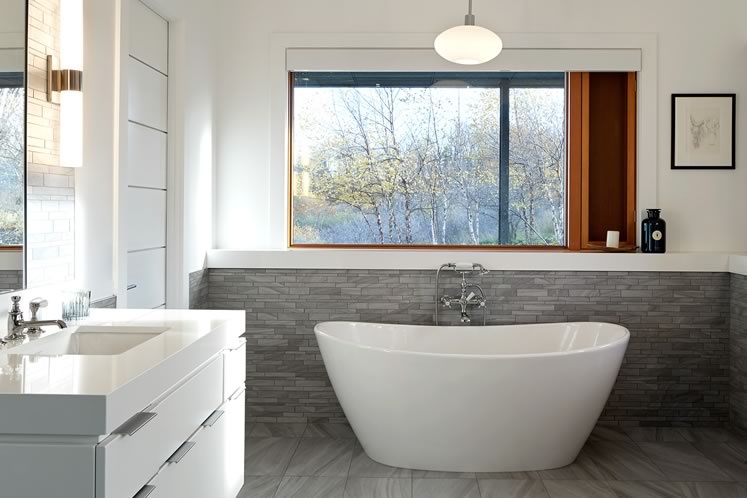 The owner says the freestanding tub in the marble-lined principal bathroom was a major factor in her decision to buy the home. Photo by Ben Rahn. 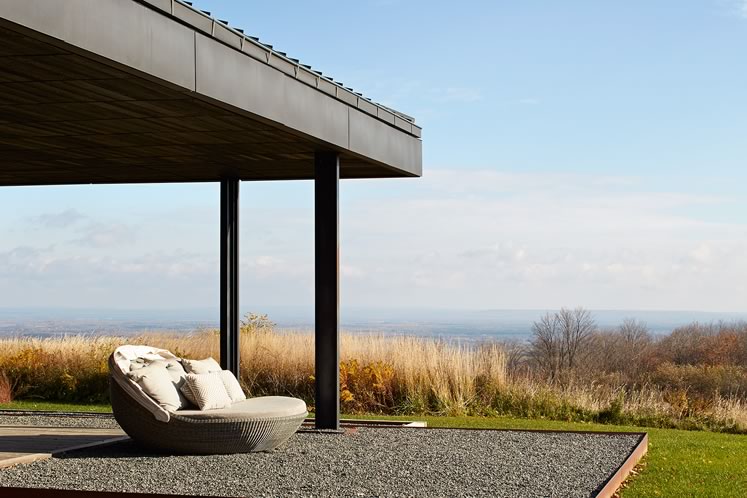 The couple’s private patio area beckons through the sliding doors of their bedroom. Photo by Ben Rahn. 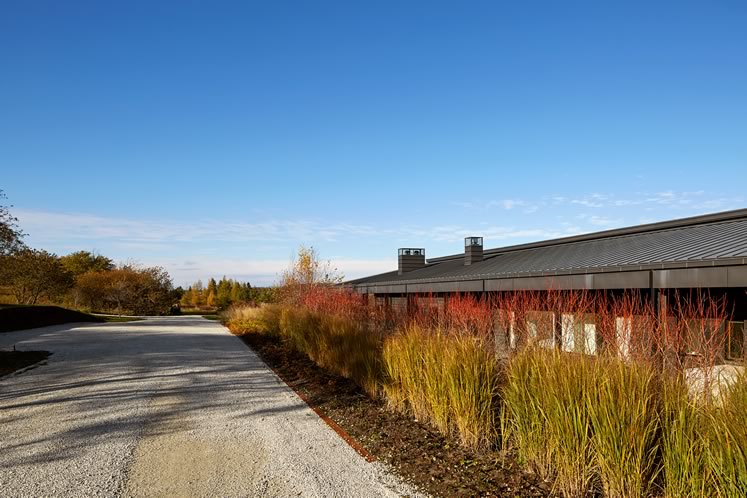 And even the best Italian furniture occasionally takes second billing to those eastern views. After much discussion about how to place a sectional in the living room for the best flow, Bill suggested a design with a notch of back cushions missing, allowing for a pleasing pocket view out the showstopping living room window.

Elsewhere, it’s fitting that there’s plenty of wall space for art at a scale that can compete with all the head-turning views. Two stand out – the dusky purple abstract by New York-based Canadian painter Bobbie Oliver in the dining area and a love letter depicted on a pale canvas by the late Sarnia-born artist John Brown which faces the living room. The latter was too big for any wall in their Toronto home, so the couple stored it in the hope of one day having the right place to hang it. Turns out they just had to buy this whole house for it. “We joke that it turned out to be a very expensive painting,” the owner says.

Jokes aside, little did Bill nor the owners – nor any of us – know that just as these finishing touches were being made in early 2020, Ontario, like much of the world, would move into lockdown. Having the space to retreat to was an enormous blessing. “It gave us all a sanctuary,” she says. “We had a gathering with extended family, including some from the United States, just before the first lockdown, thank goodness.”

And as they consider another October of perfect days, the owners can’t believe their luck in a locale that somehow mixes peace and quiet with super-friendly neighbours – and top-notch food destinations. “Maple Grove Farm is our go-to market. The 100 Mile Store in Creemore was a lifesaver during the pandemic. So many of them did a brilliant job during the lockdowns.”

The owner has rediscovered her love of horseback riding, and she also counts herself as good friends with the real estate agent who showed her the home that October day. As a glimpse of just how long-term the owner thinks they’ll be there, she admits she’s pictured the downstairs den and kitchen area as useful for, say, new parents who need their own space. “We see the house for us – but also grandkids over the next 20 years.”