In the early days of Jenna Brooks’ company Racked Out Inc., which designs, supplies and installs warehouse storage systems, she’d often be perched 20 feet in the air on a scissor lift, installing the racking herself. She might have been covered in dirt – she was surely outfitted in a hard hat, safety shoes and reflective clothing, with a full tool belt jangling at her hips.

Indeed, Jenna scoffs at what she calls the worst advice she was ever given, which was to keep her head down in the traditionally male-dominated warehouse and construction industry. “That’s not who I am,” says Jenna, now a leading player in her industry. “I’m a peacock. I don’t stay low. And that’s why I’ve attained the success I have.” 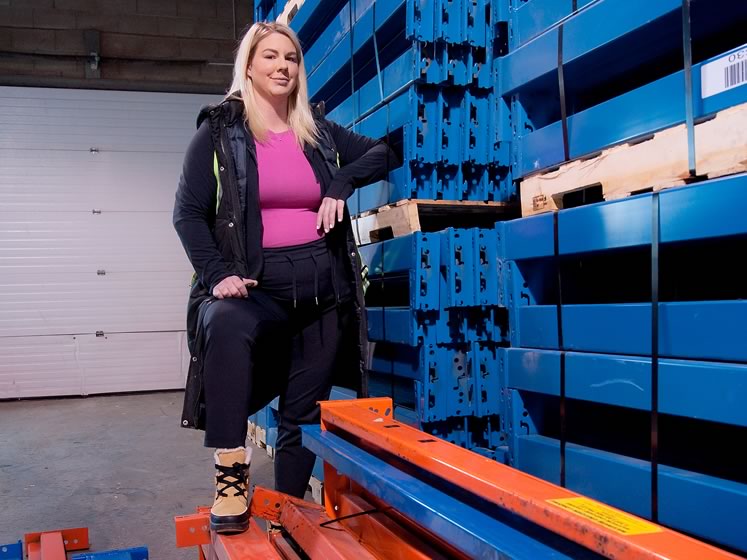 Eight years into the business, she’s currently taking it easy on those scissor lifts – she’s pregnant with twins, due in June, and has a nine-month-old, Sophie – but an irrepressible drive continues to propel her accomplishments.

Jenna, 29, was recently recognized as one of On-Site Magazine’s Top 40 Under 40 in Canadian construction and is a natural role model for women looking to work in construction fields.

Jenna, who grew up in Erin and now lives in Grand Valley with her partner, Tyler White, and Sophie, admits she didn’t initially feel the industry’s pull; she went to college for policing. “When I graduated I looked around and realized I needed a base-level income immediately. I applied for a job as a maintenance person in a warehouse, and was soon fixing and building everything.”

She was very handy with tools and impressed her boss, the operations manager. When a large project came up to build and install warehouse racking, the manager asked if Jenna wanted to take it on herself rather than the company outsourcing the work. Her maintenance partner had experience in racking and so they said yes. Jenna’s boss was so impressed, he told her that if she started a company, he would hire her for all upcoming racking projects.

That was the push she needed to register her business in November 2014 at the age of 21. The next year Jenna hired 10 staff, mostly women. “It was fun. We worked all day and made money. We soon had more job requests than we could handle.”

In those days Jenna recalls working all the time. If she didn’t now have a young child and two on the way, she imagines she might still be putting in those extremely long days. “My family definitely modelled a strong work ethic as I was growing up,” she says of her parents’ factory and cleaning jobs. “They went to work every day, no matter the conditions.”

To most observers Jenna’s work schedule is anything but cushy, even if she isn’t up on that scissor lift every day. Three of her weekdays can take her to far-flung job sites, then to her office in Mississauga, and back to job sites again before she signs off. (Two days a week she works from home.)

Here’s what a typical daily schedule looks like for her.

5 a.m.  Sophie wakes up and has a bottle, and they hang out in the living room. Jenna makes breakfast and gets ready.

6:45 a.m.  Jenna’s mom arrives to watch Sophie and Jenna leaves to drop in on one of her job sites. Even though she works with Tyler, they don’t see that much of each other as he is a project foreman and on the job site five or six days a week. He leaves after she does.

Today, Jenna visits a food storage facility in Milton. Ten of her 15 crew members are working there, setting up storage racks. Jenna uses this face time to make sure everything is set for the day and to handle communications between the client and her staff. Ultimately, Jenna is responsible for all operations and client relations. “The best part of the job is when we’ve really delivered, and a client is happy. The worst part is if, for some reason, we’ve disappointed a client. If that ever happens, we do everything possible to make it up to them.”

If her staff are, “being good little kittens, I’ll bring them doughnuts.”

Jenna says she has an open-door policy – even if that means mostly virtually by phone. “My team and I are constantly discussing project management details to ensure everything is running smoothly. And, of course, they know they can contact me anytime, even on the days when I’m at home with my daughter.”

9 a.m.  Jenna arrives at her office in Mississauga. The day’s meetings with her office manager and co-ordinator are a chance to troubleshoot and get caught up on administration.

Right now, a staffing wrinkle takes priority. “I’ve had a guy call in sick the entire week,” she says. “We’re heading into a meeting now to figure out where we move bodies. Do we cancel a job? Push a job? We have to put our heads together.”

She also touches base with the office manager on regular tasks like payroll. (On Thursdays Jenna does the bank run.)

Some mornings she has time to head down the street to squeeze in a workout at the gym, but not today. Prepandemic and prepregnancy, one of Jenna’s passions was bodybuilding and entering bikini fitness stage shows. “My team came out to cheer me on at a show in November 2019. Then Christmas came, then Covid, then Sophie,” she says. “After the twins are born, I’ll get back out there.”

11 a.m. onward  Jenna heads out to meet a long-term client for an inspection to see if it’s time to upgrade the systems Racked Out installed for them a while back. She says maintaining relationships like this is key to her business.

Back in the office, she meets with her co-ordinator for the rest of the workday. They cover upcoming projects and review files, quotes, rentals and materials.

The Milton job will take the company well into the spring. Smaller jobs can take as little as a day. Jenna usually juggles between two and four jobs – which can range from smaller retail operations who need their back rooms kitted out to enormous warehouse spaces.

She says the latter can be tough environments – especially if they’re not cooled in the summer or heated in the winter. Still, she is in her element. “We’re busy all the time and have had to turn down work. I would never want to do anything else.”

Indeed, Jenna marvels that most people don’t know her field of work exists. “Even though the racking industry requires skilled people, including engineers, it’s not even classified as a trade. Our installers are in high demand.”

3 p.m.  Jenna leaves the office to swing by the job site in Milton again to review the day’s progress.

4:30 p.m.  Jenna arrives back home and her mom leaves. Depending on the job Tyler is on, he may not be home until 7. She spends time with Sophie, playing and preparing dinner. Jenna cooks and Tyler cleans. On the two days she doesn’t go to the office, she takes care of the home front. When the family is together, they enjoy hiking and walking their dog, a golden retriever named Charlie, or going for a swim in their pool in summer.

7 p.m.  It’s finally downtime. As spring approaches and the sun sets later, Jenna and Tyler will tackle the significant outdoor tasks, gardening and cutting the grass on the two-acre property they moved to in July 2021. No surprise: Jenna is at home on a tractor.

She’s also very gratified to be a homeowner. One of her epiphanies about her career came in 2019 when, at the age of 27, she was able to buy a house in Orangeville. “As a result of all that hard work, I was so proud to be able to buy my first home at an early age. That really meant a lot to me.” 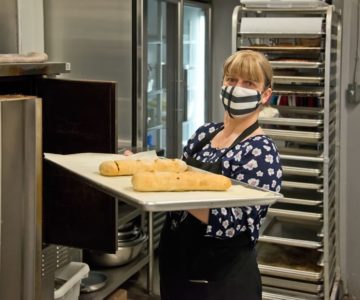 While We Are Sleeping

It’s 3:15 a.m. Where are you? Meet the folks who are doing important work in the middle of the night as most of us are curled up under the covers.