Up, Up and Away

Wages are simply not keeping pace with the cost of accommodation.

It’s a crisis that has been a long time in the making, but the pandemic pushed it over the brink. For many renters and would-be buyers, the inability to find a place to live at a price they can reasonably afford is an increasingly hopeless reality.

And the problem is hardly exclusive to Headwaters. Housing markets in towns and villages throughout the Greater Golden Horseshoe are feeling the pressure of population growth, in part from those fleeing the red-hot housing market in Toronto.

But the urban exodus is only a very small part of an enormously tangled and thorny ball of circumstances that has been rolling inexorably toward a crisis for decades. In “Out of Reach,” writer Jeff Rollings disentangles some of the contributing threads. He lays out the problems and describes some of the proposed solutions – and some of the drawbacks to those solutions.

There is clearly a supply shortage, and the recently announced provincial plan rightly focuses on building more housing – though what kind, how much, where and when still remains unclear.

And with inflation ticking rapidly upward, pushing the cost of building materials, mortgage rates and rental fees up with it, there is no guarantee that supply-side solutions alone will solve the problem.

At a much more fundamental level, wages are simply not keeping pace with the cost of accommodation. Jeff quotes a sobering statistic from Report of the Ontario Housing Affordability Task Force: The average price of a house in Ontario increased to $923,000 in 2021 from $329,000 in 2011, a rise of 180 per cent. In the same period, average incomes grew by only about 38 per cent. Combined with rapidly widening income disparity, this is the nub of the housing problem.

At the height of the pandemic, much was made of the value of essential, but often lower-paid, workers who did not have the option of working from home and who kept the economy running. But as we doff our masks and start hugging friends again, it can be all too easy to let those workers fall once more into the background.

If you read nothing else in Jeff’s story, read his opening interview with Denise. Her name has been changed, but the personal story of this hard-working mother – who holds two jobs and earns more than two-and-a-half times Ontario’s minimum wage, yet still struggles to pay her modest rent – is not only all too real, it is all too typical. As the debates over affordable housing unfold over the next few months, keep her in mind – because she deserves better. 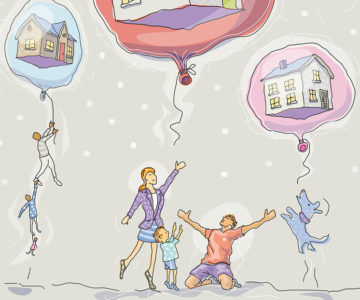 Affordable Housing Out of Reach

Owning a home, or even managing rising rental costs, is becoming farther and farther beyond the means of many working people in Headwaters.