How Food Found the Path to a Community’s Heart

From the farmers’ market to the food truck, Rasmi’s Falafel has become a familiar name in Orangeville, sharing a ‘sunny taste of Syria’ since 2016

On a Saturday morning at the Orangeville Farmers’ Market, a food truck stands large and white, its side stickered with appetizing images and a circular green logo reading “Rasmi’s Falafel.” A long line extends out from the aluminum service window; regulars wait patiently for their weekly falafel or shawarma wrap while new customers crane to read menu options from a small chalkboard hanging beneath the slogan A Sunny Taste of Syria.

The same food truck is parked out front when I pull up to a tidy Orangeville home on a different summer morning. But the truck and the burgeoning local business it represents are only part of the reason for my visit. I am here to share tea with the Syrian family profiled in this magazine by writer Liz Beatty following their arrival here in June 2016. I want to ask Rasmi Al Hariri and his wife, Islam Salamah, how they are faring six years later – and how food has helped them forge a strong link with their new community. 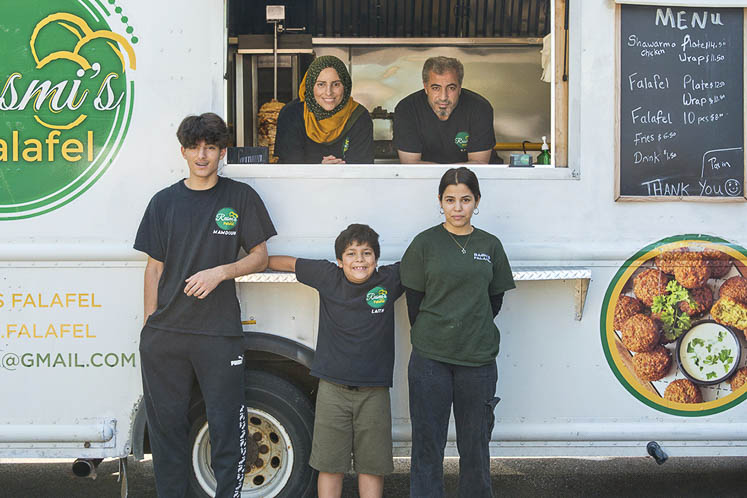 At the door, Rasmi and Islam greet me with warm smiles. Since that first article, their son Laith has grown from a rosy-cheeked toddler into a roguish, buoyant second-grader; his long-haired and poised sister Duha will start Grade 10 this fall. Their eldest, Mamdouh, was 11 when the family came to Canada. Now a high school senior contemplating computer science programs at various universities, Mamdouh towers over the rest of the family as he wanders into the living room to say hi.

The family has experienced other changes too. Since arriving in Orangeville with no English, the Al Hariris have learned to speak the language with conversational fluency. Mamdouh, Duha and Laith made friends at school; Islam and Rasmi learned to drive. In the summer of 2021, the family became Canadian citizens.

And then there is Rasmi’s Falafel.

Her husband learned to fry falafel when he was in his twenties. He had twice sourced equipment for a business of his own, in two different Syrian towns, before the war forced the family to move again to safer ground. Rasmi’s ambitions were more definitively deferred when a bomb devastated a family gathering in June 2015. The strike killed the couple’s three-year-old son, Basil, and injured Islam and Mamdouh, who spent seven months in a Jordan hospital before the family began their tenuous journey through multiple UNHCR refugee camps to Orangeville.

The idea to revive Rasmi’s dream in Canada came from Lori Ker, whose New Neighbours group sponsored the family’s resettlement. Lori joins Islam and me for tea and explains that as a thank-you to the Neighbours, the Al Hariris often hosted them for yalanji (stuffed grape leaves), sfeeha (beef pastry) and ful (fava bean soup). Impressed by the freshness – Rasmi soaks his own chickpeas to make falafel from scratch – and flavour of their cooking, Lori encouraged Islam and Rasmi to open a stall at the Orangeville Winter Farmers’ Market in November 2016.

At first, the Neighbours helped with everything from setting up the stall and handling cash, to translating orders and minding Laith and Duha. Neither Rasmi nor Islam had drivers’ licenses at the time, so the Neighbours shuttled trays of steaming falafel from the family’s first home on Spring Street to the town hall market in both winter and summer.

These days, the Al Hariris’ operation is largely independent. The family obtained the food truck in 2021 with the help of donations made through GoFundMe. On Tuesdays and Thursdays, Islam and Rasmi set up the truck in the Service Ontario lot at 41 Broadway. During the rest of the week they cook and take the truck to other food markets in and around the Headwaters area. They also offer catering for private events and plan to participate in a few of the local fall fairs this autumn.

Of course, the Al Hariri family remain regulars at Orangeville’s farmers’ market. Gone are the days when Islam felt like a stranger in her hijab, and the family’s primary customers were their sponsors or friends. Instead, the truck has become so popular that people can judge the market’s success by the number of people waiting for falafel.

“No line at Rasmi’s?” says Islam, invoking the voice of one of the other vendors. “Must be a slow day.”

But slow days are rare. Most Saturdays are hectic, and go like this: Mamdouh works the cash and sells hummus, baba ganoush, sweets and other temptations from a tent. He passes orders along to Islam and Duha, who prepare wraps inside the truck while Rasmi fries falafel and cooks the shawarma meat. Laith plays outside, showing off his monogrammed Rasmi’s Falafel T-shirt and encouraging passers-by to have a taste.

“It is all very busy,” begins Islam, then stops to shush Laith – who has reappeared to demonstrate his marketing skills, belting “Have YOU tried my mom and dad’s cooking?!” – before she adds, “And happy. Very busy and very happy.”

About the Author More by Ellie Eberlee

Ellie Eberlee grew up in Caledon and recently completed her master’s degree at the University of Oxford in the U.K. 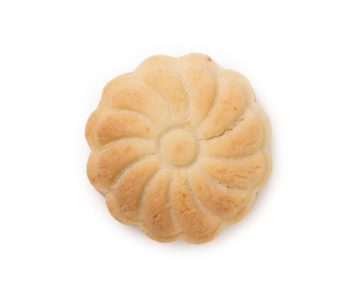 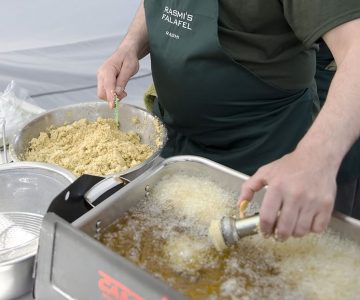 A Taste of Syria

Crispy chickpea fritters and zingy sides are at the heart of Rasmi’s Falafel. 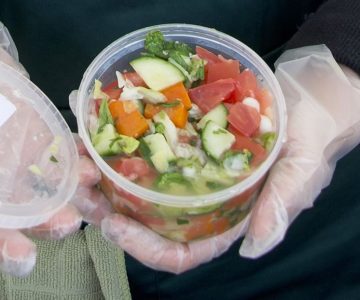 This zingy lemon garlic salad is a takeaway hit at Rasmi’s Falafel at the Orangeville Farmers’ Market. Here’s how to make it at home. 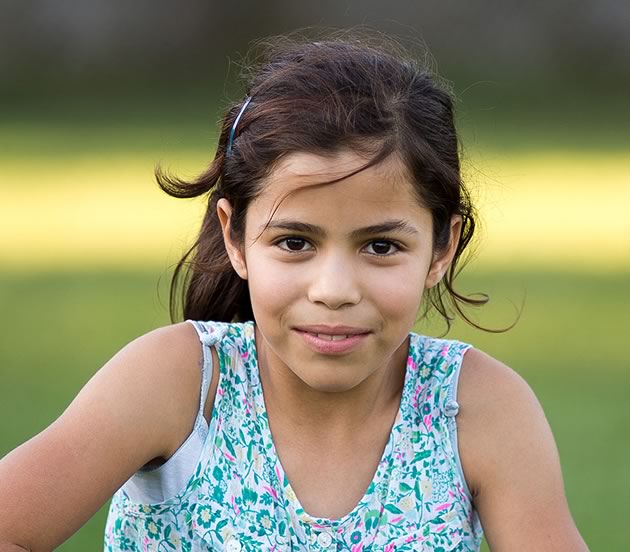 Each Syrian refugee settling in the hills arrives with hope for a safer life. Here we meet some of them, along with the locals who are lending hands – and hearts.