On October 1, 1861, a new post office opened in the hamlet of Whittington in Amaranth Township. Although the “office” was little more than a shelf at the Whittington House, an inn on the stage route to Shelburne, the Orangeville Sun called the new facility an “inestimable blessing” for people near the 2nd Line and 15 Sideroad. Such lofty prose suggested Whittington had been singled out for a privilege that was one of a kind. It was indeed a privilege, but hardly unique.

Around the same time, the villages of Camilla and Laurel got post offices, too; so did Grand Valley and Rosemont. Farther south in Peel, hamlets like Macville, Coventry and Lockton had already been “blessed” for several years. Along with many other communities, they were beneficiaries of a surge in rural post office openings that began in 1851, the year the British government handed over control of the postal system to the Province of Canada, and everything about the service changed.

What had been a complicated and fiercely expensive operation used only grudgingly by ordinary citizens, became a simplified, inexpensive and widely appreciated mail system. And one that grew. Prior to 1851, these hills had few post offices: Bolton opened in 1832, and Erin, Caledon (Village) and Mono Mills in 1839. Sandhill and Mulmur Station were added in 1841. Immediately following the new regime, in 1851, offices opened in Orangeville, Creemore, Caledon East, Horning’s Mills and Mono Centre. Each was small but would be important enough one day to become a distribution hub for rural routes. That day was 70 years in the future though. In 1851, they were just the beginning of a wave. 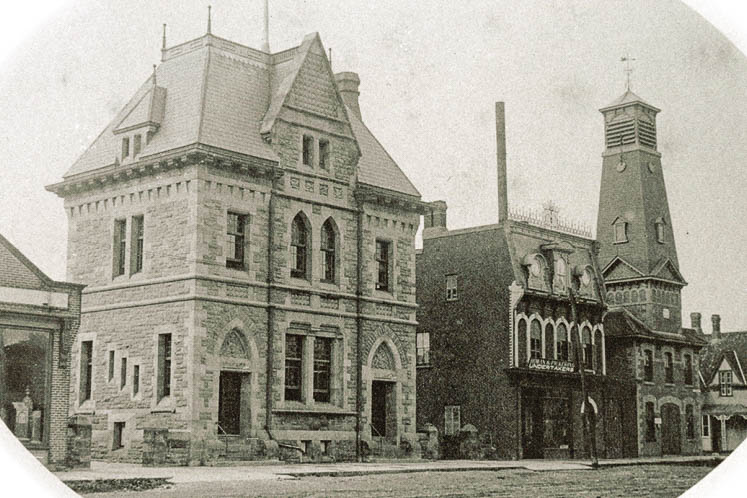 In 1886, the government paid $22,000 to construct this imposing building to house Orangeville’s busy post office. The building was demolished in 1963 in favour of a much humbler structure.

By the 1870s, on the wagon trail that would one day become Airport Road, there were five post offices in the 17 kilometres from Mono Mills to Sandhill. Along the Mono-Adjala Townline there were three – Sheldon, Lorraine and Hockley – almost within shouting distance of one another.

Even a crossroads boasting little more than a tavern or a store could be a winner. Hunsdon, for example, near Palgrave in Albion Township, scored an office in 1863 and held on to it for 13 years despite a near absence of use by patrons. At Black’s Corners in Amaranth, an office was opened in 1877 (Samuel Black, postmaster), even though it was a quick buggy ride from Crombie where an office had opened a few years earlier on the Toronto, Grey and Bruce rail line.

In the latter half of the 19th century, the Post Office Department (Royal Mail Canada) touched the lives of rural voters more visibly than any federal government ministry, so for politicians, arranging a local post office paid gratifying dividends. To get one could take little more than a pitch like this by Reeve James Donaldson of Garafraxa Township: “A post office is much in wanting here,” he wrote simply in 1851. Within months an office opened in Reading: James Donaldson, postmaster.

In addition to postmasterships, a post office could mean government contracts. When Monticello in Luther Township got a post office in 1878, a local citizen was contracted to bring its mail from Grand Valley twice a week. Similarly, mail distributed out of Kilgorie’s new post office (1881) had to get there from Shelburne.

For the government, this largesse was irresistible, for everything about it was low budget, especially the rural post offices themselves, which required next to zero capital investment. They operated out of privately owned buildings with rent and salaries recovered in revenue that, with rare exceptions, increased with the presence of a local facility. The only delicate decisions were locating them and appointing postmasters (and gradually over time, postmistresses).

Everything local and familiar

General stores such as the one in Waldemar were preferred sites. Taverns were not unusual. A blacksmith shop did the job in Britannia (near Brampton). A very common site was a postmaster’s own home, which meant the location could easily change. In Amaranth Station, for instance, when John Lacon yielded the postmastership to Gus Groskurth in 1910 and then got it back three years later, local residents had to adjust each time. Not that it really mattered – the two homes were pretty much side by side. 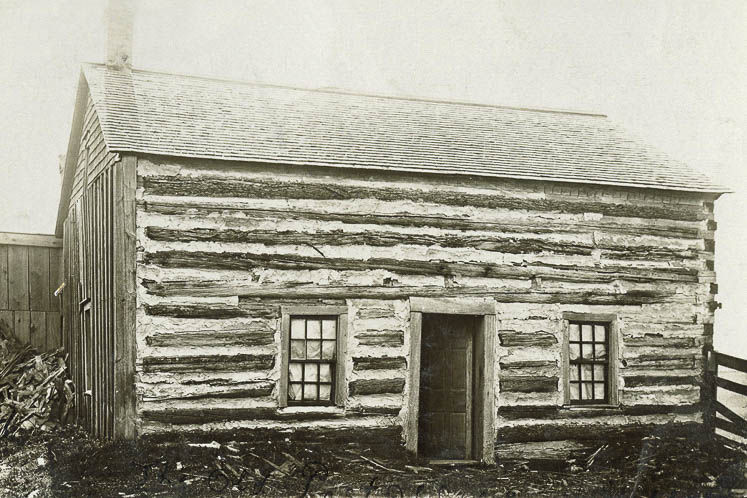 In 1851, the first Horning’s Mills post office opened in the log home of James McGhee. Upon his death in 1860, the post office moved to the home of the next postmaster. Over its lifetime (1851-1983), it operated from seven different locations.

A potentially ticklish issue for rural communities where everyone knew everybody was the issue of privacy, for a piece of mail could expose business dealings or an affair of the heart. But the absence of comment about privacy in the local press suggests this downside was far outweighed by the benefit of local convenience.

Indeed, the value of an office is apparent in that several communities gave up established names at the request of the Post Office Department. Among well-known examples in the hills are Paisley, which became Caledon East, and Charleston, which became Caledon (then in 1975, Caledon Village). Sometimes communities themselves asked for a change. The office in Mount Hurst (Albion Township, north of Bolton) opened in 1861 and for nearly a decade most of its mail went to Mount Forest until the department agreed with the postmaster to name the hamlet Castlederg.

The benefits of a “blessing”

The convenience of postal service close to home is obvious. Whittington’s office, for example, saved locals an 18-kilometre round trip to Orangeville. And service was more than letters and parcels. For many rural residents with limited access to banks, and often wary of them to begin with, completing long distance cash transactions via money orders and postal notes was a major advantage.

Symbolism could be even more important. Once a community scored a post office it had “arrived.” It was linked to the outside world, an elevation that immediately appeared in real estate ads, where invariably “post office nearby” was cited as a crucial amenity.

Not that the system was perfect. Many rural offices received mail only once or twice a week. There was no such thing as guaranteed open hours, and if an office didn’t produce revenue, it was closed. Lisgar in Toronto Township opened in 1871, sold $11 worth of stamps over two years, and closed in 1873. These mild downsides, however, disappeared along with the offices themselves when rural mail delivery began.

Officially, rural route delivery began in 1908, but a few years passed before all the needed routes were organized to run out of larger communities, after which most rural offices closed. Necessarily addresses changed. Once again, Whittington was served out of Orangeville – on one of its six rural routes – and Coventry, for example, became RR1, Bolton. But there were few complaints. Service improved, parcel post was enhanced, C.O.D. was added in 1923, and mail now arrived every day. It was a truly sophisticated mail system with a high level of service.

No one could have felt the difference more than postmaster Courtney Conn in Elder (Mono Township). An office was opened in his home in 1854. His salary that year was 10 cents. Sixty years later Courtney, still the postmaster, stood by as the office was closed. It simply wasn’t needed. His annual salary had grown – to $42.50 – but no one knew better than he that the day of the rural post office was over.

Lost in the mail?

Every rail line in these hills had mail cars, and while a train was moving, clerks in these cars sorted and bundled mail destined for individual post offices. It worked especially well except when it didn’t. On October 4, 1888, the Shelburne Economist told subscribers their paper had gone astray the previous week because of a particular mail car clerk who, the paper alleged, “is addicted to making mistakes.”

In 1918 (year of the first airmail delivery in Canada) the number of post offices operating in these hills was only slightly larger than it was in the mid-1850s. The Postal Office Department became Canada Post in 1981 and began closing smaller offices (over 1,700 Canada-wide in the 1980s) while adding retail outlets in towns and cities. Interestingly, the office-to-population service ratio today (about one for 6,000 people) is not dramatically different from the ratio in 1900 (about one for 5,000) when the nation was far less mobile. 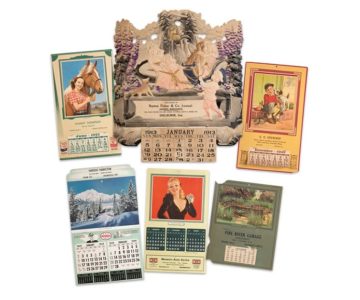 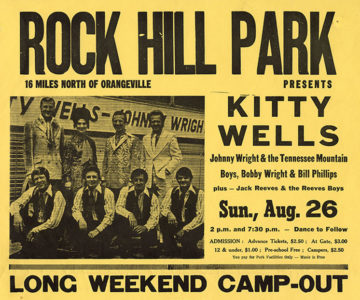 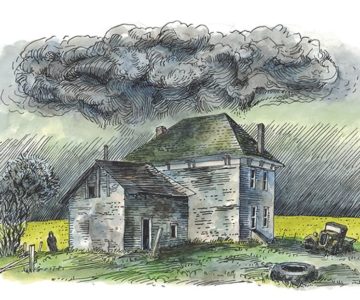