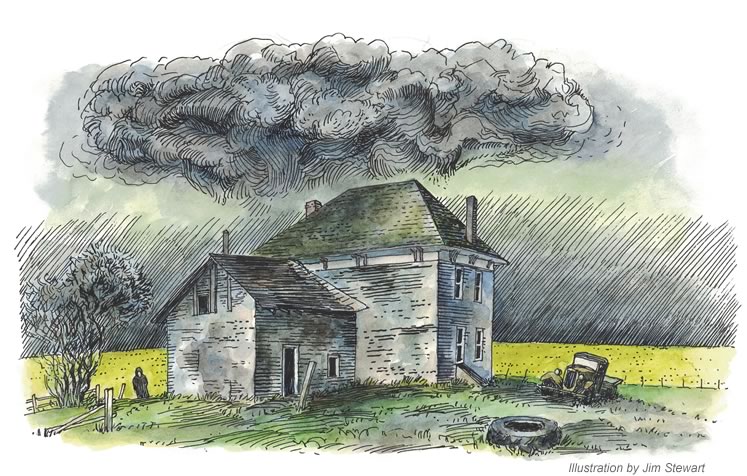 For eight years, Alfred and Sophia Dobson had lived comfortably on their Mulmur farm at the corner of the 4th Line and 5 Sideroad. But then some very strange things began happening in their house.

It started with the kitchen broom. Normally, between uses the broom stood in the hallway to the parlour. But in the winter of 1930, the broom seemed to relocate – on its own – to various other places.

At first it was a phenomenon easy to dismiss, for in a house with several adult occupants, a broom is often moved and forgotten. Not so, though, for a lightning rod with a distinct shape. To see it fixed on the east side of the roof one day and on the west a day later definitely gave pause. Then there was the butter dish. The Dobsons’ 22-year-old son, Oliver, watched the dish flip over on its own and then flip again after he righted it! The dish sat on a table that would often be found inexplicably lying on its side or even upside down.

By early May the broom had grown bolder. Another Dobson son, 35-year-old Ross, swore he saw it dance about on the parlour floor with a coat draped on its handle – and then go up the stairs. The coat, along with shoes, boots, caps and other clothing that customarily hung inside the rear door of the farmhouse, would often be found in the yard, although the door was shut, on one occasion actually nailed shut to frustrate the mysterious force.

The family dog, once privileged to lie on the parlour floor, would no longer enter the room. Meanwhile, heavier objects were now flying around (a bolt smashed through the kitchen window) and the broom became even more aggressive, whacking the Dobsons’ little granddaughter on her back.

Time to get out

The Dobsons fled in June. According to Alfred Dobson, the tipping point came when the strange power moved to the barn. “It would take the halter off a horse and tie it around the front feet so it couldn’t move,” he told the Shelburne Free Press and Economist. “A set of team harness would go missing; we’d find it in the mow. And then the thing would loose the cattle and horses, open the doors and we would find the stock outside. Soon I couldn’t stand it. I didn’t put in any crop and I have now been forced to leave the place.”

Neighbours found themselves involved in the mystifying events on the Dobson farm when traffic jams formed along the 4th Line and up and down 5 Sideroad. After the Toronto Star and the Evening Telegram reported on the “spook farm,” as they called it, and the story was picked up by wire services, Mulmur Township became a go-to spot on Sunday afternoons. Most visitors were simply curious. Some were spirit seekers keen to find the source of the physical disturbances. An unfortunate number were souvenir hunters, and in short order the abandoned farmhouse lost almost anything that could be picked up or pried off.

Inevitably, the media buzz meant that expert opinion was called for, but the conclusions of the “professionals” were mixed.

After visiting the property, Frederick York, editor and publisher of The Spiritual Voice in Toronto, asserted there was “no tangible evidence that spirits had anything to do with the manifestations.” However, spiritualist investigator Ivan W. Hutchins, described by the Orangeville Sun as holding “a religious charter from the provincial government,” opined that a spiritual force was definitely at work, likely operating through a member of the Dobson family (thus implying a poltergeist). But in August, when Mr. Hutchins held an “official” seance in the farmhouse – as opposed to an “unofficial” one (see sidebar) – no manifestations occurred to indicate the presence of a spirit.

Failure to produce an intriguing explanation of the events at the farm meant the story soon lost its cachet with the public. As late as October, the Orangeville Banner had reported an investigation that suggested “the presence of a feminine force,” adding weight to the theory that a poltergeist was the Dobsons’ problem, but by the time the first snow fell, interest in the “spook farm of Mulmur Township” had disappeared into the files of people who studied the paranormal.

What really happened at the Dobson farm?

For sceptics there remains a compelling argument to dismiss the story. Following the Dobson tenure, the farm was occupied for 20 years by the Orr family, then for more than 60 years by the Kennedy family, with no reported incidents. Current owner Kathleen Kennedy says to her knowledge no one living at the farm since the Dobsons has ever reported a supernatural phenomenon.

Still, for those inclined to accept the possibility of “something strange,” there is the uncomfortable fact that Alfred and Sophia Dobson suddenly left a productive 160-acre farm for an 18-acre stead 10 miles away and never came back. Which emphatically provokes a “why?”

A cynic would place money at the heart of the matter. Alfred Dobson, then 72, candidly admitted to the Shelburne Free Press and Economist that he was broke, and added that not only was he unable to rent the farm, but he’d paid $15,000 for it in 1922 and would get less than half that if indeed it would even sell.

There was still a mortgage on the property in 1930 and land title records, while difficult to interpret, indicate there was a foreclosure. We know today that the Great Depression was well launched by mid-1930s and farmers who simply walked away from their properties were already becoming a feature of the times.

The cynical view, however, ignores that whatever the family’s financial situation, Dobsons had nothing to gain by promoting their property as a “spook farm.” In fact, Alfred always insisted this was not the case. “It is not a ghost,” he told the Shelburne paper. “We have never seen one. I have sat up many nights in the house and barn watching but never was able to discern anything that would lead me to think it was a ghost.”

Such frankness suggests it could be fair to grant Alfred Dobson the benefit of the doubt. As hard as it might be for others to believe, the presence of a force on the farm seems to have been real to him. “It’s an evil influence,” he told the press. “This thing has more power than you think.”

In the paranormal canon, a poltergeist is generally held to be a force that mischievously — sometimes malevolently — generates strange noises and mysteriously moves objects. The force is often said to operate through a single individual, unaware he or she is the medium. Among the alleged flaws in the Dobson story is that only family members ever witnessed the uncanny phenomena, but that very point has also been used to substantiate the possibility of a poltergeist.

How not to hold a seance?

During August and September 1930, at least two unproductive seances led by acknowledged spiritualists were held in the Dobsons’ empty farmhouse with the family present. Several “unofficial” sittings were also held with sincere but amateur leaders at the helm. At one of these, participants were encouraged to bring objects they felt might encourage a manifestation, and a local farmhand named Eddy brought an accordion. After an hour of traditional stimuli brought no results, he was called upon to see if music would have an effect. The instrument may have been a poor choice or perhaps it was Eddy’s limited repertoire (he could play “God Save the King” and “How Dry I Am”), but no spirit appeared. 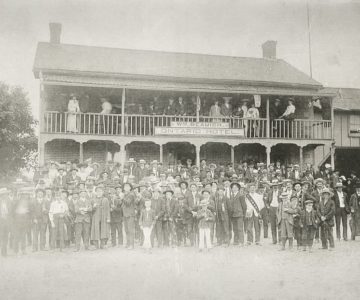 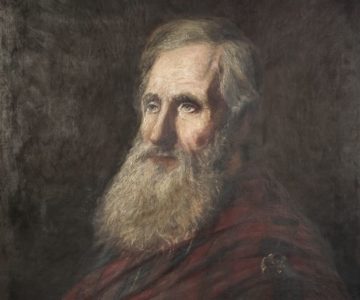 A century ago Alexander McLachlan was one of the best known citizens of these hills, widely admired, respected and praised for his poetry. Today hardly anyone has heard of him. How did this happen? 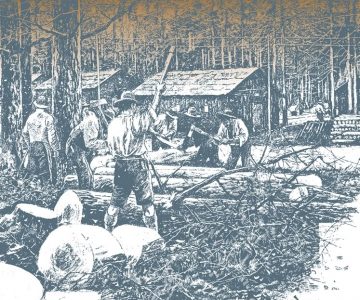