Asparagus can easily grow ten to twelve inches a day if the temperature gets above twenty-five degrees.

I’m not normally one to talk about bodily functions, especially with people I’ve never met before. But thirty minutes into the interview, with the farm-fresh aroma of baked cinnamon buns wafting into the dining room of the century-old brick farmhouse where we sat, I asked Greg Downey and his wife Melissa, “Do either of you suffer from asparagus pee?”

It was a hard sunshiny February day that’s difficult to imagine in late March when the snow has softened up. A bitter wind rattled the glass in the old window frames as if it wanted to come inside. I was visiting the young couple on their Berryview Farm, located across Heart Lake Road from Greg’s parents’ place, Downey’s Farm Market, to talk to them about their asparagus.

The young Downeys, Greg, 33, Melissa, 31, and their kids, Tyler, 6, Kyle, 3, and Jillian, 2, are no strangers to the farm. They all grew up on one. While Melissa pulls in a salary by teaching and baking special occasion cakes, Greg farms full time. Melissa says her agricultural background is important. “From April to November,” she explains, “I’m pretty much a single mother.”

This allows Greg to dedicate his time to growing a variety of fruits and vegetables, including a half-dozen acres of asparagus. Greg explains, “I grow six acres because that’s how much sandy soil I have on the farm.” Asparagus favours a light loam since it drains well and doesn’t form a crust that can impede the emergence of tender young asparagus shoots. And based on what his customers have to say about his product, Greg knows what he’s doing. 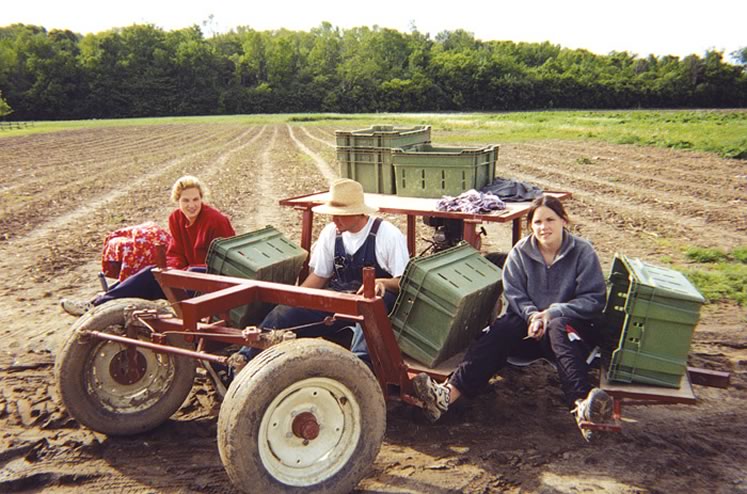 Melissa and Greg Downey and his sister Darlene (right) take a break from their labours in the asparagus fields.

Howard the Butcher in Caledon East is a big fan. He purchases pretty much all the purple-tipped Berryview Farm asparagus he can get his hands on. “We probably go through 100 pounds a week during the season,” says Howard, adding, “It’s outstanding.” Anyone who buys meat from Howard knows that quality is important in this swishy shop. When it comes to Greg’s asparagus, Howard says it has slender stalks, it’s local and, most important of all, it’s fresh. “Greg will cut it in the morning and I’ll get it the same day,” says Howard.

Last year, Greg added farm-gate sales to his operation. He explains, “We spend four to five hours a day grading asparagus so there is always someone in the shed.” As a result, selling directly to the public made sense. So during the asparagus season – between early May and mid June – the farm is open to the public seven days a week.

In a good year, the Downeys harvest two tonnes of their mixture of Jersey Centennial, Jersey Giant and Jersey King per acre. Varieties are bred to produce a uniform product that’s straight and fast growing. And fast it is. Asparagus typically grows as much as eight inches a day, Greg says, but “it can easily grow ten to twelve inches a day if the temperature gets above twenty-five degrees.” He adds, “You want heat but not too much heat.” If the temperature gets up into the mid-twenties, it’s hard to stay abreast and the tips loosen up.

When cooked, asparagus with tips that aren’t tight tends to get mushy, says Jo Fillery, owner of What’s Cookin’ in Erin, another dedicated customer. While limp asparagus was the norm for generations past, these days, cooked asparagus that is a bit crunchy is de rigeur. Melissa had never eaten asparagus before she met Greg. Now, she says she likes to be able to eat her baked or barbequed asparagus with her fingers, so it mustn’t be over-cooked. Her favourite recipe involves tossing the raw vegetables in a little olive oil and parmesan cheese and then baking them in a 350ºF oven until they’re tender.

Each spring, Jo estimates she buys more than 300 pounds of Berryview Farm’s best. She uses it exclusively to make asparagus lasagne, one of What’s Cookin’s signature dishes. The ingredients also include lemon goat cheese from Woolwich Dairy in Orangeville. As a testament to the quality of Downey’s product, Jo explains, “We only make asparagus lasagne when Greg’s asparagus is in season.”

Greg applies a commercial fertilizer and sometimes uses pesticides to combat the asparagus beetle, but otherwise his crop grows well on the Peel Plain. He was attracted to asparagus because, as a spring crop, it puts some cash into his coffers early in the season.

As we each pull apart a cinnamon bun, Greg explains that for now the asparagus is the only product he sells from the farm gate, but he plans to add apples this year. He also looks after the strawberries, raspberries and pumpkins grown for his parents’ operation across the road. And like his mum and dad, for whom Greg is a dead ringer, he hopes his kids will take over the farm when the time comes.

And in case you were wondering, both Greg and Melissa suffer from asparagus pee. I guess it’s the price of doing business.

The Skinny on “Asparagus Pee”

It is said that in a venerable British men’s club there is a sign that reads: “During the asparagus season members are requested not to relieve themselves in the hat stand.”

If you are among the majority of people (about 80 per cent) who doesn’t suffer from asparagus pee, it doesn’t mean you don’t get it. It may simply mean that you can’t smell it. Then again, it could mean that you don’t get it. It seems there are people who definitely get it and can smell it. There are those who don’t get it and those who get it but can’t smell it. And then there are those who can only smell it if they’ve consumed enormous amounts. Whatever its intensity though, the effect is likely caused by a sulphur-containing compound.

The suspected culprit is methanethiol. It’s not certain, but Hannah Holmes, says her bet is on methanethiol if only because of its description in her version of Merck Index. That chemical text says methanethiol is composed mostly of sulphur with a splash of hydrogen, plus some carbon, a brew famous for its effect in rotten eggs, cabbages and paper mills. It mentions the asparagus connection and warns that methanethiol may be a narcotic in high concentrations.