Dan Garyfalakis surprised his wife Nina with their first pair of beehives as a gift. 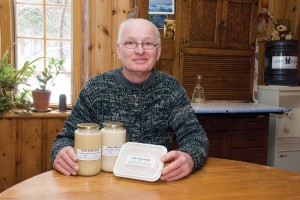 For thirty-five years, Bob Darrell has been the local “honey guy.” For all those years, he has sold his honey on the honour system from his home, which is tucked in under the shadow of the Devil’s Pulpit in the Forks of the Credit. And only once, last year, has anyone ever pilfered the cash jar that sits on the honey table at the end of his driveway. “People respond to trust,” says Bob.

During the latter part of the summer and through the fall, tourists and locals stop at Bob’s honey sign at the end of his driveway. Below it, they find jars of Forks of the Credit summer or autumn honey, as well as Bob’s prize-winning honeycomb. Most years he enters the Dufferin Beekeepers’ honey contest. “Often I’ll win the comb honey category,” brags the fit 67-year-old, “because I make the best.”

Bob’s bees are a prolific bunch, at least they were in 2007. During last year’s dry summer when other apiarists had trouble keeping their moisture-starved bees alive, the million or so bees in Bob’s thirteen hives produced an astonishing 1,800 pounds of honey, well above the provincial average of 80 to 100 pounds per hive.

Nestled alongside the West Credit River as it tumbles below the trestle bridge, his hives are in “the best location around.” Certainly access to water is no problem. The bees are also able to find plenty of the basswood trees and white sweet clover (a metre-tall plant with small white flowers) that give his popular summer honey its signature taste.

In the course of her lifetime, a worker bee will produce one twelfth of a teaspoon of honey.

Its flavour is very different from his pungent autumn honey. Darker in colour, the fall variety is steeped in the bitter nectar from goldenrod and asters. It’s an acquired taste that is accompanied by a musty odour, which some people find off-putting.

After years of beekeeping, Bob tends his bees clad in a pair of shorts and a T-shirt, though he always wears a veil. Over the years, he’s been stung thousands of times. However, “If I get thirty stings in one day, then I back off,” he explains. “Something is wrong.” Hot dry weather with a shortage of flowers or heavy rain, for instance, can put bees into a foul mood. “If bees have to hang around in the hive, they tend to get grumpy.”

Bob has started selling raw or unpasteurized honey, which means he doesn’t heat it above 25 degrees Celsius and is unfiltered. As a result, it contains enzymes, bits of pollen and propolis, all of which are considered to have health benefits.

Although he uses an organic solution to protect his bees from mites, the honey is not organic. He treats his wards with an antibiotic twice a year to prevent them from contracting American Foul Brood, a disease that causes the larvae to rot. He says he hasn’t had problems with Colony Collapse Syndrome that affected U.S. bees last year and doesn’t know of anyone this far north who has. He’s convinced it’s caused by agricultural sprays. “Know what happens when a hive gets sprayed by pesticide?” he asks. “The bees won’t come back to it.”

Bob’s income from his honey equals his Canada Pension, so it’s not insignificant. His wife Kathy admits to dipping into the honey jar for her shopping money. Bob and Kathy’s four kids are all grown up now, but they have no plans to move from the old frame home on its one-and-a-half-acre riverside lot. “We’ll live here until the house crumbles down around us,” Kathy says. Good news for Bob’s honey customers. 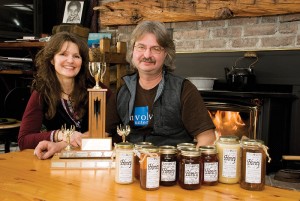 Dan Garyfalakis surprised his wife Nina with their first pair of beehives as a gift. She had wanted keep bees since tending them with her grandfather in the Swiss Alps. Photo by Tom Partlett.

As I settled into their kitchen, I was impressed by what I took to be a lovely custom-made filing cabinet. But the nearby table loaded with carefully labelled, orderly lines of filled honey jars gave it away. The “filing cabinet” was actually one of Dan’s handcrafted beehives.

Stained a rich brown colour, the workmanship invested in the “honey super” hinted at the meticulous approach this couple applies to honey-making. It’s an approach that has paid off, if not financially, at least in recognition at local and provincial beekeeping competitions. The couple has only been in the bee business for four years, but six red, first-place ribbons hang above their kitchen table and a sizable trophy is on display.

Dan met Nina while he was travelling in Europe in 1982. He convinced the Swiss native to move to Canada, where they set up house in Toronto. But the countryside beckoned and a year later the young couple was living in the Hockley Valley.

Nina explains that she always wanted to work with bees. As a child, she was lucky to have accompanied her grandfather, an amateur beekeeper, while he tended his hives high up in the Swiss Alps.

Bees do not create honey; they are actually improving upon a plant product, nectar. The honey we eat is nectar that bees have repeatedly regurgitated and dehydrated.

While Nina and the couple’s three children were visiting Switzerland in 2003, Dan bought a pair of beehives to surprise his wife. At the time, says Dan, who has a background in industrial engineering, “I didn’t want to have anything to do with bees.” But almost immediately, a swarm hive moved into the boxes he’d set up, forcing him to get involved, and he was soon caught up in the business of beekeeping. “I like learning,” he explains, and there’s plenty to learn about apiculture.

Now the couple work as a team. Nina puts together the “frames” that slide into the hives or supers that Dan builds. Grabbing a frame that’s encrusted with the papery evidence of a honeycomb, the couple gives me a lesson in honey-making.

“Normally,” Dan tells me, “the foundation in a frame is made of plastic.” Nina, however, uses beeswax. “The plastic is cheap and easy to clean,” she explains, “but the bees hate it and don’t build good cells on it.”

The Garyfalakises donate between $1 (for a 5oog jar) to $2 (for 1kg jar) to support their “kids,” disadvantaged youths in developing countries. So far they sponsor seven children in a variety of countries including Mexico, Peru, Ghana and Sri Lanka. They hope their honey sales will increase to the point where they can support 1oo kids.

Dan and Nina also mimic nature by leaving their bees plenty of honey to feed on during the long winter. Commercial beekeepers normally replace honey with sugar water. Dan adds, “I also hand scrape and hand process the honey.” This slow method once again breaks with commercial producers who use heat to uncap the honey from the frames.

Ideal locations for his forty-nine hives are sheltered, have wildflowers and water nearby, and are at least three kilometres (the maximum distance a bee flies) away from agricultural field crops and industry. Dan says that in the Hockley Valley good locations are not hard to find. He uses four spots.

Another of Dan’s secrets is the use of something called a “queen excluder.” It is a device that prohibits the queen from laying her eggs in the honey supers. That makes the wax – and the honey – stay cleaner, but yield is reduced. In all, Dan figures his quality measures cost him up to a third of the yield a commercial producer might coax from bees. This means that Dan and Nina have yet to break even with their honey-making “hobby,” but with a surprise first place prize at the 2007 Annual Ontario Beekeepers Convention for their golden honey, and a waiting list of people anxious to purchase their product, that’s sure to change.

Nina pulls out a small wooden box that contains medals her grandfather received for his beekeeping efforts. Would your grandfather be proud? I ask Nina. “Oh yes, “she says, “oh yes, he would be.”

For more amazing facts about bees: www.pbs.org/wgbh/nova/bees/buzz.html. For information about the Ontario Beekeepers Association, including local associations and contacts in Dufferin and Wellington, visit www.ontariobee.com.