Magic in Mushrooms! So you think mushrooms are all flavour, no substance? At Windy Field Farms they have news for you. 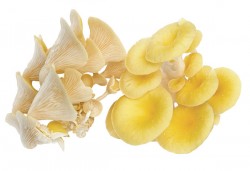 Dressed in a loose-fitting golf shirt, khaki shorts and hiking boots, Ralph Baumlisberger doesn’t look like a typical farmer. And he isn’t. As he leads me through a maze of climate-and humidity-controlled rooms in two barns that once housed laying hens, he explains, “I didn’t want to sit all those hours on a tractor.” So when Baumlisberger’s dad sold off his egg quota and retired, his son had to come up with a new plan for the 100-acre farm near Grand Valley.

Mushrooms weren’t the first crop that came to mind, but after a friend asked if he could use the old chicken barns to grow his edible fungi, the idea caught hold. Baumlisberger did a little digging and decided to give it a try himself. That was five years and a lot of production headaches ago. Today, Windy Field Farms turns out as much as 1.5 tonnes of mostly blue oyster mushrooms (Pleurotis ostreatus) per week. (It also produces a few yellow oysters and some shiitakes.) A wholesaler in Hamilton takes nearly everything Windy Field can produce and, unlike many farm families, no one is working off the farm for a supplementary income.

Twenty-year-old Phillip is home for the summer helping with the mushrooms (daughter Natalie, 19, is working elsewhere). Meanwhile, Baumlisberger’s wife, Julie, is the tie that binds. Part salesperson, part cook, coffee maker, gardener, community organizer and mother, she has eyes that sparkle. “Heck, we dated on a tractor,” says the native of Sandhill, a hamlet in Caledon, as she hands me a cup of hot coffee. “If I wanted to see Ralph, I had to ride on the tractor.”

Long thought to be devoid of many nutrients, the reputation of the mushrooms has been rehabilitated, not only for the unique texture and flavour they add to any food lover’s list of essential ingredients, but for their nutritional value.

They have been shown to be a great source of amino acids and they are low in fat, cholesterol-free, and full of riboflavin, vitamin D and, surprisingly, B12, a vitamin formerly thought only to be available from meat. Blue oysters have a mild flavour, but are substantial and meaty. One mushroom producer refers to them as “the chicken of mushrooms because they go with everything.”

At Windy Field, the mushrooms grow year round. A staff that includes three full-time and two part-time helpers fill smallish black plastic bags with chopped pasteurized straw that has been inoculated with mycelium, the fruiting part of a fungus. For fourteen to eighteen days the mycelia “spawn.” Once they’ve exhausted the food supply, the stems elongate and the mushroom caps pop out through pre-existing holes in the sides of the bags. 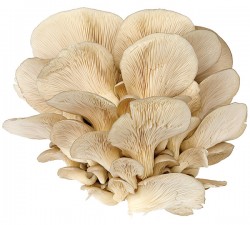 Before I have a chance to ask, Baumlisberger tells me, “Only white button mushrooms are grown on composted manure.” It’s this variety that gives mushroom farming a “shitty” reputation. Calcium chloride, peroxide and the like are used to keep button mushrooms white. Baumlisberger doesn’t bother with that stuff. Although he runs into problems with a mould called trichoderma, which forces him to disinfect his growing rooms, his mushrooms are quite natural. Proof of how clean an operation he runs is the quality of his mushroom compost.

David Warburton, a landscaper based in Hockley Valley, isn’t apologetic for the high standards he sets for his suppliers. “Not only are we using Windy Field’s compost, but we sell it to our customers. It’s wonderful stuff,” he says.

Because they have all they can do to satisfy their wholesale contract, the Baumlisbergers have not made retailing through the local market a high priority. “We like to support local, but there is a time factor,” Baumlisberger explains, though he adds that Windy Field mushrooms are almost certainly among those on the shelves at the local Sobeys and Zehrs.

Friends, neighbours and those local restaurants lucky enough to get them rave about the fungi grown near Grand Valley. Carol van der Grinten, a neighbour, can’t say enough good things. In fact, asked what she wanted for her birthday, van der Grinten’s teenaged daughter Erika said her choice was a box of Windy Field shiitakes all for herself.

Marlies Kaehli, who lives on a nearby dairy farm, trades chickens or eggs for Baumlisbergers’ mushrooms. “My kids aren’t sure they like the texture of mushrooms, but they love the flavour.”

Grand Valley resident Theresa Mitchell is drawn by their freshness, a key to successful cooking with mushrooms. That’s a feature also important to Patrick Venables, chef at Orangeville’s One99. “They are an awesome product and we always have them on our menu,” he says. You’ll also find them on the menu at Hiding Inn Hockley and the Village Bistro in Caledon.

Before leaving with a large box tucked under my arm, containing blue and yellow oysters, as well as shiitakes (which I turned into a fabulous risotto), I can’t resist gently chiding Baumlisberger for not making more effort to sell to the local market. My motivation is self-serving – I’d love to have access to such fresh and wholesome mushrooms.

In fact, two weeks later, Julie Baumlisberger set up a booth at the new Wednesday evening farmers’ market in Inglewood. Although she admits it’s hard to make a business argument for the modest sales at the small market, Baumlisberger was impressed with the “wonderful atmosphere” and the community’s commitment to purchasing fresh, local food – and she promises she’ll back each week until the season ends. 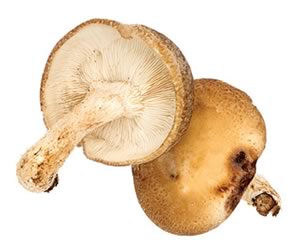 In our salute to the wild and cultivated varieties, we are featuring a creamed soup, a pie and a bruschetta.