The Tomato Girls, a moniker given them by one of their customers and biggest fans, Pete Paterson from Caledon East, tell me that worldwide there are over 4,000 varieties of heirloom tomatoes.

At Willow Creek Market Garden about 2,ooo heirloom tomato seedlings will soon poke their heads through the greenhouse soil. Sounds like a lot, but if you want some, you need to act fast.

“We were lucky to find a landlord who would allow us to start a grow-op in his basement,” Kelly explains. “But we called the police to let them know, so it turned out okay.” Avoiding a run-in with the law is just one of the trials of starting an heirloom tomato business. Others include weather, lack of know-how, weather, a meagre income, weather, and the limits to just how much two people can grow. 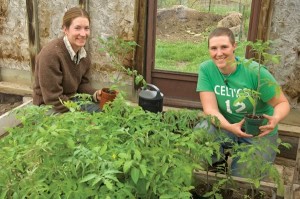 Kelly Gregory and Crystal Anderson with some of their heirloom tomato plants at Willow Creek Farm. Photo by Pete Paterson.

Kelly Gregory, 26, and Crystal Anderson, 28, both echo-boomers (children of baby boomers), don’t seem to be fazed by the challenges of a life spent weeding. Budding organic farmers, the couple dreams that someday they’ll have their own 100-acre farm with a woodlot, wetland and farm animals. “We want it big so that we can farm ecologically,” explains Crystal.

An attachment to the land wasn’t part of either woman’s upbringing. Kelly left her suburban home in Pickering to study dance at George Brown College in Toronto. With the posture and grace gained from that training, she reminds me of Cate Blanchett in The Curious Case of Benjamin Button. She gave up dance because she knew she didn’t have the burning desire needed to make it her life. Her long auburn hair pulled back into a thick ponytail, Kelly doesn’t smile easily, at least not at first.

Crystal’s energy has already warmed up the kitchen on the wintry day when I visited. Her short hair is pinned flat. She wears two chunky necklaces and a pair of rings. Studs, which decorate her chin, one nostril and both ears, are a clue to her rebellious spirit. With a high-school diploma, Crystal left her home in Gibson’s Landing on BC’s Sunshine Coast when she was eighteen. “My ‘plan’ was to travel,” she recalls.

The pair met when they were both working as housekeepers at the Delta Lodge at Kananaskis in Alberta.

“We were friends,” says Crystal, “then we realized that something else was going on.” Since getting together, they’ve cruised through a variety of jobs. Crystal smiles as she tells me she was a “petroleum distribution engineer” for a time. Kelly ended up baking. But that was before they found farming. And that really is how it sounds – they found farming.

The pair travelled to Nova Scotia’s Annapolis Valley where they took jobs weeding industrial-sized onion fields. Somehow spending ten and a half hours a day, for six days per week, and getting paid seven dollars an hour, turned them on to agriculture.

Stints as interns learning ecological farming techniques through the Collaborative Regional Alliance for Farmer Training program in Ontario, put them in touch with Jay Mowat and Claire Booker of Willow Creek Farm just south of Erin. Each weekend, Crystal would run into the Erin couple at the farmers’ market in Milton. When Jay and Claire wanted a break from farming last summer so that they could take an extended holiday, they offered their land to Crystal and Kelly, and even found them a place to live.

With the why-not attitude of youth, the couple accepted the offer and Willow Creek Market Garden was born. Soon they were searching for seeds to plant in their landlord’s basement-come-greenhouse. Kelly’s dad, an electrician, installed the necessary lights and the girls planted about 1,400 plants consisting of between thirty and thirty-five varieties of heirloom tomatoes. In anticipation of some hefty hydro bills, they tipped off the police in advance, since a spike in electricity use is the first clue that someone has started a grow-op.

The Tomato Girls, a moniker given them by one of their customers and biggest fans, Pete Paterson from Caledon East, tell me that worldwide there are over 4,000 varieties of heirloom tomatoes. Definitions of what the term means vary. Some believe the cultivars must be more than fifty or even a hundred years old to qualify. Purists claim that a true heirloom has been handed down from one family member to another for generations.

One thing is certain though. To be an heirloom, a tomato must be “open pollinated,” which means it has to be pollinated by insects, birds, wind or other natural mechanisms. The alternative is the hybrid. The advantage of hybrid varieties is that they are very uniform and vigorous because they result from a marriage between two homozygous parents, which produces very heterozygous offspring. The main disadvantage is that farmers must buy new seed each year from the companies that can breed – and therefore control – hybrid seed. Moreover, companies that breed hybrid tomatoes are reputed to be more interested in the uniformity and vigour of the stock than in how it tastes. Think cardboard tomatoes.

Kelly and Crystal are planting 2,000 seeds this month. Come June 1 when the risk of frost has passed in Erin, they will transfer about 500 of them to Willow Creek Farm and add the tender young things to the other vegetables they will grow organically and sell at local farmers’ markets, including the one in Inglewood. The rest will be sold as young plants.

“We could grow 5,000 seedlings and we could sell them all,” boasts Crystal. “The seedling operation is a nice infusion of cash at the beginning of the season,” Kelly adds.

This year they know that their biggest sellers are likely to be Brandywines, which grew really well last year, and Green Zebras, which were popular because of their unusual appearance and their “tangy, citrus-like” flavour. The pair will also plant extra Lemon Boy and Purple Calabash varieties favoured by Jay and Claire, the Tomato Girls’ mentors and biggest fans.