Tom Wilson and Nicole Judge should not have had to endure four years of administrative tomfoolery to establish Spirit Tree Estate, their cidery, bakery and local food shop.

With one urban foot and the other one rural, it’s understandable that the Town of Caledon has a split personality. Nonetheless, it doesn’t seem right that good, visionary people such as Tom Wilson and Nicole Judge should have had to endure four years of administrative tomfoolery on the part of the town, Credit Valley Conservation and the Niagara Escarpment Commission.

[NOTE: Update to story appended below.] The indefatigable duo are the epitome of near-urban farmers. Nicole, 38, who grew up in Cheltenham, is a veterinarian turned chief operating officer for the Ontario Veterinary Group. She was three weeks short of producing the couple’s first child when I met her, and had no plans to give up her number-crunching career.

Tom, 37, is a fourth-generation Caledon farmer who studied history and politics at university. The pair has spent their holidays over the past few years taking courses in cordon bleu artisanal bread baking, cider making, and brick oven construction, in Europe, the U.S. and Canada.

I asked Tom what his father, who raised beef and grain on the family farm on Dixie Road near King Street, would think of the couple’s plan to open a cidery, bakery and local food shop that caters to food-loving yuppies and builds on the buy-local craze? “He would be impressed,” Tom says.

Slated to finally open this month, Spirit Tree Estate Cidery is the latest example of the mix between agriculture and tourism that Caledon encourages in its official plan. 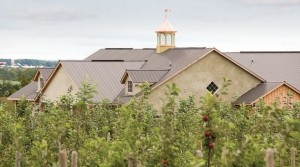 Tom says that he is following in the footsteps of Downey’s Farm Market and Winery and Broadway Farm Market. But one look at the 6,500- square-metre facility, built from straw bales by local contractor Colin Cherry, makes it obvious that Tom and Nicole are going a step further. Spirit Tree is more upscale winery than farm market. Think Jackson Triggs or Henry of Pelham.

Inside, your eye is drawn to an enormous wood-fired bake oven. “It’s an Alan Scott style oven,” explains Tom, “that we built using red Ontario bricks.” It looks rustic, but is actually wired with nifty technology that allows the baker to control the temperature at all times. A few pieces of wood were smouldering when I was there in July, because the oven needed to cure before it would produce to its potential.

There are dozens of such ovens across the US and Canada, many based on Alan Scott’s design, but Tom tells me the town has deemed it a “commercial appliance,” and by mid- July had still not issued him a permit to use it. The designation has more to do with the size of the building than the oven itself. The width of the straw bale walls pushed the size of building, along with its contents, into a commercial category subject to a whole new set of regulations.

This bit of bureaucratic red tape is only one of the reasons the cidery didn’t open in 2006 as the couple had hoped. When Tom first approached the Niagara Escarpment Commission with his plans in 2005, the agency gave it a pre-emptory nix, Tom says. “I remember Tom coming home and telling me that they wouldn’t even consider it,” recalls Nicole.

At that point, the young couple had already sold the family farm and moved to the house and forty-six acres on Boston Mills Road, just east of Mississauga Road. They had even planted the orchard.

It took extraordinary efforts by several Caledon councillors, especially Richard Paterak, who is an NEC commissioner, to get the agency to crack open its doors. But even that didn’t mean NEC was warm to the idea. One of its more curious requirements was that Tom plant large native trees on the perimeter of his land to hide the apple trees. (He has planted twenty commercial varieties of apples, along with fourteen cider types, including Kingston Blacks, Red Astrachan, Golden Russet and Yarlington Mill.) Moreover, Tom had to hire a certified landscape architect to design the planting.

But as expensive and over the top as that may seem, it failed to trump the provisions Credit Valley Conservation imposed. As we looked out over the wild apple trees that are scattered across much of Tom’s land and which had attracted him to the property in the first place, he wonders why CVC is so worried about his commercial apples.

Tom had originally planned to install a greywater system to handle the wash water used to process his fruit. But, per directions from CVC, he had to hire an engineer who charged him $1,500 to prepare a nitrate-loading report. Then he installed an $80,000 storm water management system, and a $36,000 bio-filtration plant to handle the nitrogenous material in his wash water. He also spent $6,000 on a 4,000-gallon grease tank, even though his primary source of grease is a bit of butter used in baked goods. (He has no deep fryers.)

After years in the works, Caledon’s new policies on agriculture and rural lands (OPA 179) came into effect in 2009. In announcing them, the town declared, “The fundamental mandate … is to maintain Caledon’s rural heritage while providing family farmers with the opportunity to complement their agricultural business with other appropriate on-farm businesses.”

Allan Thompson, councillor for the ward where the cidery is located, is appalled by how the town has failed to live up to its own policy. The farmer- turned-politician says that his greatest disappointment is that he couldn’t do enough to help Tom and Nicole avoid the red tape. What happened to them, he says, “is wrong, totally wrong.”

In spite of it all, Tom remains amazingly upbeat. The frustrations have been offset by lots of community support and encouragement, he says.

At some point, their Tied House will serve cider along with a light lunch. (Tied houses were popular in British breweries that wanted to provide limited food service with their beer.) And once they get the oven permit, artisanal breads and other baked goods will complement the local cheeses and produce these selfprofessed “foodies” will offer. 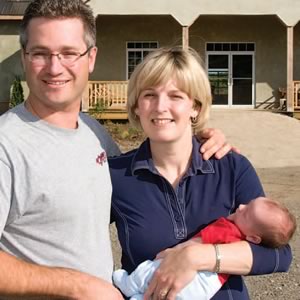 It took them years longer than expected, but Nicole Judge and Tom Wilson are set to open their upscale cidery this month. Kiernan, at one month, is the apple of his parents’ eye. Photo by Pete Paterson.

Tom and Nicole are especially proud of Spirit Tree’s energy-saving features: gravity-fed fermenters, geothermal heating and cooling, a biofiltration septic system and, of course, the straw bale construction and wood-burning oven. And their cider will be pasteurized using an ultraviolet system that uses a fraction of the energy of the heat-based process.

They had hoped to produce their apples organically, but Mother Nature forced them to move to an advanced integrated pest management system. “We’re going as organic as possible,” says Tom. They even planted wildflowers between the trees to encourage pollinators and the four beehives on their land are doing well.

Ultimately, though, the couple knows that the soil will dictate the flavour of Spirit Tree cider. They wonder if the Niagara Escarpment’s clay shale will give it a signature essence – once these intrepid entrepreneurs get all the permits they need to produce it.

UPDATE (March 20, 2010): Spirit Tree Estate Cidery has been allowed to re-open. Visit their web site for opening hours or find them on Facebook or Twitter.