The biggest barrier to fruit wines is getting people to try them. That’s why winery manager Ed Roy is happy to have visitors spend time at the tasting bar. Photo by Pam Purves.

As a teenager and aspiring veterinarian, I devoured James Herriot’s books about his travails as an animal doctor in rural England. Of all the yarns he told, however, there is only one that I recall in detail.

In it, Herriot finds himself consuming copious amounts of fruit wine with a taciturn farmer who can’t believe that someone actually likes his homemade brew. As I recall, gooseberry wine was followed by apple, pear and half a dozen others until Herriot could barely see, much less walk a straight line. Predictably, the good vet is then called upon to preside over a particularly difficult birth of a neighbouring farmer’s prized cow. Herriot’s description of his drunken attempts to deliver the calf was so hilarious that I recall sitting up in bed exploding in loud guffaws. I can only imagine what my university roommates made of my middle-of-the-night belly laughs.

I tell this tale as a way of explaining my willingness to give fruit wines the benefit of the doubt. It’s an attitude that is hard to come by among Canadians raised on wine made from grapes. Whereas many eastern Europeans, the Polish in particular, are very fond of their black currant wine, and many Asians are drawn to sweet fruit varieties, the majority of wine drinkers here turn up their noses at alcoholic beverages produced from the bounty that Caledon can produce: raspberries, strawberries, rhubarb, apples and more. When I asked Ed Roy, who manages Downey’s Estate Winery in south Caledon, about his success with fruit wines, he told me, “It’s a tough sell because most people think that fruit wines are sweet.” 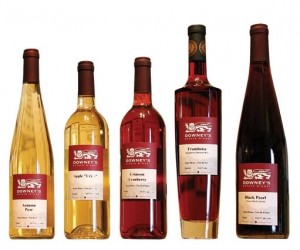 Ed recommended these wines to accompany the turkey dinner of writer Nicola Ross and her family. Photo by Pam Purves.

It’s a misconception proven out when I arrived for holiday dinner at my sister’s bearing a selection of Downey’s fruit wines that Roy had carefully paired with our turkey repast. As I popped the cork on a bottle of pear wine to accompany our appetizer (a fig and olive tapenade), my niece gave me a quizzical look and asked, “Isn’t fruit wine a bit sweet to go with an appetizer?”

Sometime before the family dinner, my interest in Downey’s fruit wines had drawn me and about a dozen others to a tour and tasting organized by the Caledon Countryside Alliance. One cool Friday evening in September, Roy herded our small group past the petting zoo and goat walk to Downey’s winery. We tasted apple cider before Roy pulled the tops off the stainless steel tanks to expose great vats of cranberries, raspberries and other fruits. We learned about winemaking and were invited to taste the fermenting juice as its alcoholic content rose to the 10 or 11 per cent target.

What struck me that evening was Roy’s explanation that, whereas grapes gain much of their character from the soil, his wines had flavours of their own. This characteristic of grapes is called terroir.

Whether minerals picked up by grapes really do affect taste is debated widely. In a 2003 article in Harpers Weekly, wine journalist Jamie Goode investigated how, if at all, soils affect wine. He noted the definition of terroir “is quite a tricky one to tie down, but it can probably best be summed-up as the possession by a wine of a sense of place, or ‘somewhereness.’”

His article suggested the presence of terroir was “proven” by Randall Grahm’s rocks experiment. A “terroirist” – someone who believes in the controversial concept – Grahm investigated the flavour imparted by minerals by adding rocks directly to wine to see if their addition changed the taste. He observed that the rocks resulted in dramatic differences in aromatics, length and persistence of flavour. “In mineral-rich wines,” said Grahm, “there is a suppression of obvious fruit.”

Following our tour of the winery, our group enjoyed tasting a sampling of Downey’s almost forty varieties of wine and cider, which includes a handful of grape wines. Almost everyone left with a bottle or three tucked under their arm.

Jennifer Grant, owner of Harmony Whole Foods Market in Orangeville, was no exception. Along with a group of friends, Grant had made strawberry wine earlier that year, so she was keen to learn a few tricks of the trade.

Downey’s makes its wines from everything from gooseberries, raspberries and strawberries to peaches, rhubarb, and even nectarines and maple syrup. And while many of their most popular varieties are sweet,  most of their wines are dry, some of them mouth-puckeringly so. Try the Crimson Cranberry, if you doubt me.

Back at my sister’s turkey dinner, I poured Autumn Pear, with a sweetness rating of zero, into waiting glasses held by apprehensive family members and friends. With a pale golden hue, it could have passed as grape wine. The first sip drew a few “ahs.” The wine’s dryness clearly surprised those expecting cloying sweetness. One sip turned into two and three. But while Autumn Pear was a pleasant departure from expectations, the general consensus was that it lacked complexity. While readily drinkable, one sister said it didn’t have much “character.” I wondered if it was not character, but “familiarity” that she was missing.

A small bowl of wild mushroom soup topped with a dab of yogurt followed our appetizer. I’d asked Roy in advance to recommend some pairings based on the menu for the family event. So now, on his advice, I cracked open another golden-hued bottle, this one chilled Apple Crisp, also rated zero for sweetness. With a liqueur no longer expected, this wine, prepared from a mix of apples grown by Greg Downey right at the farm, drew a more favourable response. “It tastes like apple cider,” said one friend. Others agreed. There seemed to be a comfort level with the familiarity of cider.

We tried Crimson Cranberry with our local fresh turkey, stuffed with apple and prune dressing, and accompanied by mashed potatoes with celery root, pear and parsnip purée, as well as braised Brussels sprouts. Roy had made this selection because, “We just have to do it.” He added, “There’s a reason why we serve cranberry sauce with turkey.” Crimson Cranberry was not as well accepted as Apple Crisp or Autumn Pear, so we moved on to Downey’s prized Framboise (sweetness 18) with our plum pudding and mincemeat tart, and a choice of the Maple Gold dessert wine (with a dizzying sweetness of 25) or Black Pearl dessert wine (black currant with a sweetness of five) with cheese, crackers and pears.

Downey’s winemaker, Brian Moreau, told me, “The biggest barrier [to fruit wines] is getting people to try them.” He added, “Our tasting bar is our secret.” And indeed, when I was picking up my wine from Downey’s, a young couple was making good use of the service. They obviously liked what they tried, and walked away with four bottles.

No one at my family dinner expressed any willingness to give up their chardonnay or cabernet sauvignon, but they acknowledged they might expand their wine list to include some fruit wines.

In the spirit of experimentation, we tried adding sparkling water and a twist of lemon to the Black Pearl (black currant) dessert wine. It was a hit and we found ourselves considering the possibilities of making Sangria and other summertime cocktails from Downey’s wines.

As for me? I’ll continue serving a chilled glass of Downey’s very popular Framboise with a chocolate dessert. I also found myself corking the unfinished bottles so that I could try them out on guests at an upcoming dinner party. I never did become a vet, but it seems that James Herriot and I have something in common after all.