What’s your website address?” I ask Margaret Galati as we wrap up our interview. Sheepishly, she admits that Rock Garden Farms doesn’t have one. “But if you call, someone will answer the phone,” she assures me.

Truly though, you have to visit Rock Garden, on Airport Road just north of Caledon East, to appreciate what an extraordinary place it really is. Step inside the 2,000-square-foot retail market and the tomatoes are rosier, the apples are piled higher, the baked goods smell better. Outside, perennials, annuals and, especially, hanging baskets overflow in the spring, while pumpkins, squash, gourds and Indian corn create a giant cornucopia for autumn shoppers. It’s hard to put your finger on what makes this business so very special, but a couple of hours with Margaret sheds light on this family-run operation’s secret ingredients.

“We are each responsible for a section of the store,” Margaret explains. “Before customers arrive, we’ve already checked our section, weeded out spoiled fruits or vegetables and trimmed the flowers.” While this level of care shows, it isn’t Rock Garden’s entire secret. Good product – and lots of it – is the main menu. 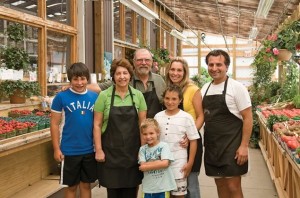 Tish and Nick Iuglio with Margaret and Paul Galati and their children, Anthony (left), 12, Michael, 10, and Stefano, 5. “If you call, someone will answer.” Photo by Pete Paterson

Margaret’s parents, Nick and Tish Iuglio, ran the Tullamore Market further south on Airport Road for twenty years before moving the operation to its present location in the late eighties. Nick, who grew up in Naples, comes from a long line of farmers, so it was only a matter of time before he started his own produce business. But first Nick ran into Tish, a native of Calabria, Italy and a cashier in the Toronto Superstore where he worked in produce.

According to Margaret, it’s her dad who is the stickler for quality. And most of what Nick knows he has passed along to Paul Galati, a young Brampton man who started sweeping floors and taking out garbage at the Tullamore Market when he was only 16 years old. Margaret says that she and Paul became fast friends, and despite her mother’s well-intentioned warning about the pitfalls of working with your spouse, the couple married and now have three sons aged 12, 10 and 5.

Paul gets up at 2 a.m. every day, seven days a week from April 1 until October 31. Groggy-eyed, he heads down to the Ontario Food Terminal in Toronto with his father-in-law. There the duo spends hours picking through the very best apples and cucumbers, tomatoes and peaches that Ontario has to offer.

Anyone who questions the quality of produce at the food terminal need only listen to local-food-guru Anita Stewart wax poetic about North America’s third largest food market. Only Chicago and New York boast larger facilities. The Toronto Food Terminal has 80,000 square feet of cold storage. Stewart calls the Food Terminal “manland” because of the predominance of men who barter over the price of fruits and vegetables, and rely mainly on handshake deals. Nick and Paul arrive well before dawn to avoid the crowds and get the pick of the produce.

The pair is back in Caledon East by 7 a.m. with a new load of the freshest, sweetest, tartest and most colourful produce they can find. An hour later, Rock Garden opens to the stream of customers attracted by beautifully displayed, remarkably fresh produce, pies, bread and other baked goods that are prepared on site daily. Tish’s homemade chutneys, preserves and, especially, her roasted peppers and tomato sauce are also beloved by Rock Garden’s customers, as are Margaret’s flowers and hanging baskets.

Belfountain resident Kate Subak sets her annual clock by Rock Garden Farms. “It’s the rhythm of the season,” the young mother of three explains. “I know Rock Garden opens each year on April 1, but sometimes I manage to hold off going until April 2!” 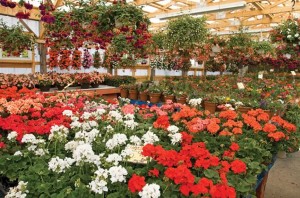 This year, Rock Gardens’ brand new 8,000-square-foot greenhouse means there’s even more to entice Subak and others. Margaret has started growing some of her own flowers so that she can prepare custom patio plants, hanging baskets and Easter arrangements.

Margaret’s home-grown flowers will complement the other two crops cultivated on the farm: strawberries and corn. In a good season, strawberries fl y out of the store at a rate of 100 six-quart flats per day. Meanwhile, those so inclined can pick their own from the five-acre patch.

Rock Garden Farms also plants thirty to forty acres of corn, mostly peaches and cream. During the season it is piled high waiting for shoppers eager to pass this rite of an Ontario summer.

Interest in fresh Ontario produce has skyrocketed over the last five years. And this helps account for a shift in Rock Garden’s customer base. About three-quarters of their clientele once consisted of people driving by en route to their weekend cottages. “Now,” says Margaret, “local shoppers keep us busy throughout the week.” The word is out. Increasingly, local shoppers are heading south from Dufferin, east from Erin, and all points in-between to get their weekly “fix” of Rock Garden’s luscious produce.

Adriana Roche who, together with her husband Gilles, owns the Gourmandissimo Catering and Fine Food Shop in Caledon East, is one of the lucky ones. Rock Garden is on her doorstep. “I’m always confident that I’ll get the best quality fresh produce from Margaret,” she says. “If we need something special, Paul will always get it for me.” Gourmandissimo’s herbs, fruits and vegetables come from Rock Garden.

That kind of customer service is another of the ingredients that sets Rock Garden apart from larger chain stores that might sell produce a bit cheaper. Kate Subak, for instance, doesn’t just buy food from Rock Garden; she gets cooking and canning tips from Tish. Paul hands out gardening advice, and Margaret gives her hints on growing flowers. 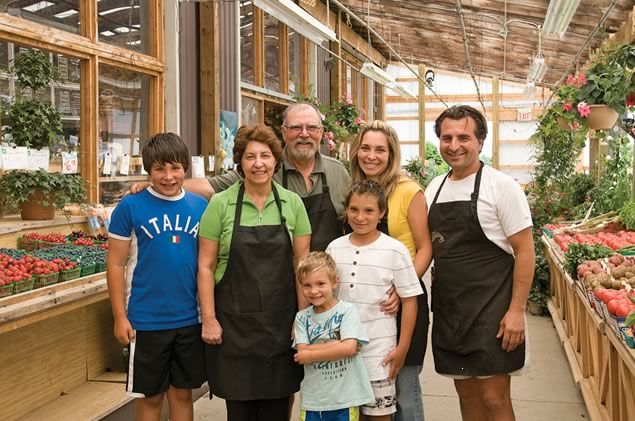 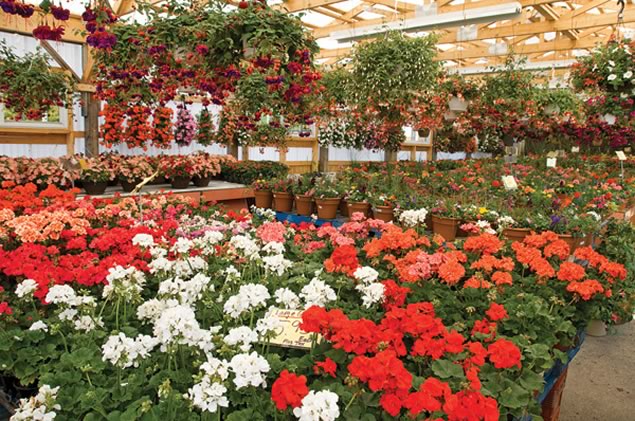 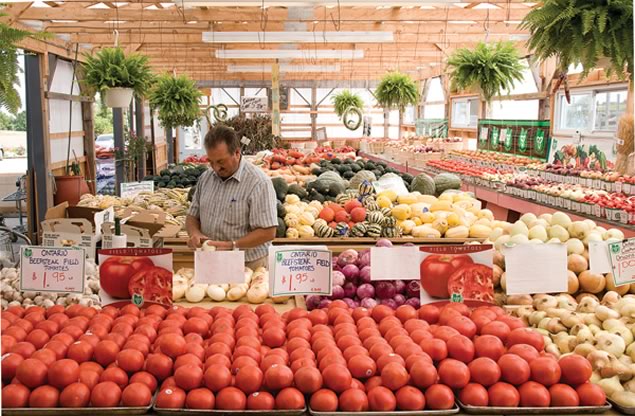 <
►
>
Tish and Nick Iuglio with Margaret and Paul Galati and their children, Anthony (left), 12, Michael, 10, and Stefano, 5. “If you call, someone will answer.” Photo by Pete Paterson 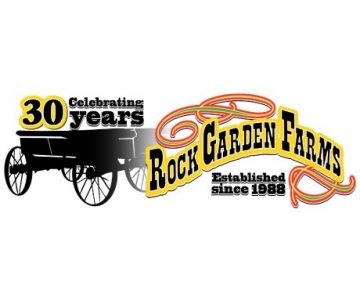