Closing the Divide Between Farm and Plate

Closing the divide between farm and plate: I grew up believing that my part of the Niagara Escarpment wasn’t much good for farming. Gord McArthur sees things differently. 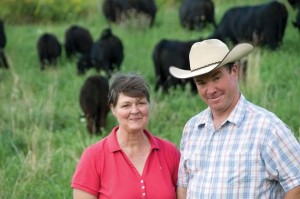 I’m sitting in the passenger seat of Gord McArthur’s swanky white Ford S350 crew-cab pickup truck. Gord’s red-haired son Don, 27, is in the back seat and we’re heading to a nearby farm to take a look at the black Angus cattle Gord pastures there.

I’ve sort of known Gord for most of my life. The same age as my next eldest sister, he frequented the same hallowed halls of learning as I did (Belfountain Public School and Mayfield Secondary), but also spent a few years at the public schools in Alton and Cataract.

Nonetheless, this is the first time that our conversation has extended beyond a few polite greetings. It’s one of those things. He was a farm kid and, even though he lived on the next farm south of where I grew up and we likely rode the same school bus from time to time, my dad was a city guy, so I was from away.

Sitting in that truck, I feel as if I am crossing some kind of social divide. Gord is obviously pleased to be showing me his countryside from a truck that indicates he is doing okay, and I am fascinated to be shown the land I’d grown up on through the eyes of someone who has either farmed or wanted to farm for his entire life.

Gord tips his cowboy hat to the back of his head as we climb out of the truck. He warns me to mind my step as we walk down a trampled path where pale blue chicory and Queen Anne’s lace poke up through rich green grass and the odd cow patty. I’m wearing sandals!

About fifteen jet black cattle have the run of the land. It is a dream existence for them, except for the clouds of flies that have their tails working overtime. There are a handful of half-grown calves, a few heifers, some cows and about the gentlest bull I’ve ever met. One of the cows is in heat, which may account for his lack of malice toward me. 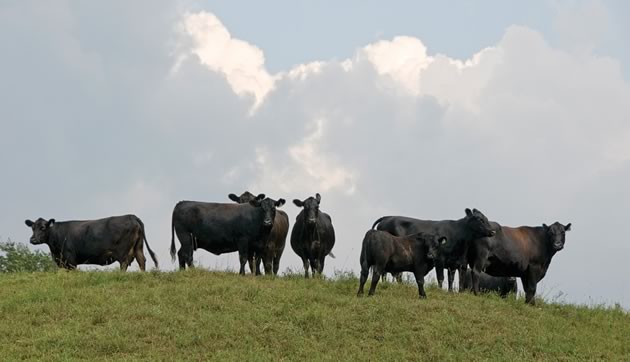 Gord explains that he practises “management-intensive grazing.” With about 125 beef cattle spread out over four farms, including his own, Gord is on the go 24/7. Once a week he moves each herd to a new field to give the grass they’ve just grazed thirty days to recuperate.

My memory is flooded with the brown, close-cropped fields dotted with purple-capped thistles that we called pasture when I was kid. The fields we are now walking through are lush and healthy. And that helps explain the quality of the all-natural beef Gord produces. His cattle are grass-fed, but finished off on a mixed vegetable and grain ration that adds marbling and flavour. The cattle are given no additives.

I grew up believing that my part of the Niagara Escarpment wasn’t much good for farming. Gord sees things differently: “You’d be amazed at how much protein this land can produce through cattle.”

Where I saw rocky fields filled with wildflowers and scrubby apple trees, and felt pleased that with the protection the Greenbelt Act and Niagara Escarpment Plan, they would likely never be paved over, Gord saw lost opportunity. “There is some great land around here, but it’s been let go,” he says.

Gord has managed to piece together some 500 acres for pasturing his cattle and growing hay. Heatherlea Black Angus is the proprietary name of his breeding stock, which are shipped around the world. He adopted the name from his stepdad Gord McBride’s herd of Heatherlea Dairy Cattle.

Recently, Gord has added market gardening to the enterprise, to supply his wife Pat’s latest endeavour: Heatherlea Farm Market. Now he has pumpkins, squash, rhubarb, sweet corn and gladiolas to contend with, and he is having fun building the farm’s first corn maze when I visit in late July.

The farm market sprang from another business altogether: Gord and Pat’s short experiment running a bed and breakfast. They discovered their guests had an impressive appetite for local food.

“One weekend, guests from our two rented rooms bought $1,100 worth of food, mostly beef,” Gord explains. “Then we grew a bit of sweet corn and I couldn’t believe how many people roared up our driveway to buy it.”

When their road, Winston Churchill Boulevard, was paved, more and more commuter traffic began using it as a route from Erin, Hillsburgh and beyond to get into Brampton, Mississauga and Toronto. “It used to be that you had to be located down close to Brampton to get the traffic,” Gord says. “Urban sprawl has been good for our business.”

When the road through Belfountain was closed a couple of years ago, the traffic really increased past Heatherlea. Pat and Gord, along with Don and his wife Melinda, decided to seize the opportunity.

In 2009, they converted their garage into a small but upscale store and filled a bunch of freezers with beef. Soon they added pork, chicken, turkey, bison, wild boar and lamb, and eventually even rabbit, pheasant and partridge.

As the number of customers increased to some 100 people each week, they expanded their offerings further to include savoury and sweet baked goods (Pat is a great cook), condiments, eggs and fresh local vegetables. Overflowing in their small space, their family room was the next sacrifice to their entrepreneurial efforts.

Polly Yawney, one of Heatherlea’s most dedicated customers, shops there so often that people joke she must have shares in the business. “I’m really fussy,” Polly protests. “I wouldn’t spend the money if it wasn’t worth it.”

Polly is enthusiastic about Heatherlea’s beef, but is most effusive about the spinach and feta chicken sausage. And she has been a boon to Heatherlea: she comes from a family of fifteen kids, many of whom now frequent the on-farm store. Her mother, who lives in Sudbury, puts in an order whenever her daughter visits.

She says she loves supporting the local economy and that Pat goes out of her way with special orders. “Where do you get that service anymore?” Polly asks.

“We don’t consider ourselves storybook farmers. We take farming pretty seriously,” Gord tells me. Theirs isn’t a hobby farm, but to keep their heads above water, the McArthurs don’t just run cattle, there’s also the landscaping and maintenance business, the fencing business, and now Gord and Don also sell and install large hoop houses.

Meanwhile, Pat dreams of having a commercial kitchen and someone to help her and Melinda with the growing business. Asked what is the biggest barrier to growth, Pat replies deadpan, “Well, I need to sleep.” Melinda adds, “There is a lot of pressure on Kayleigh (her one-year-old daughter) to grow up so she can help out too.” 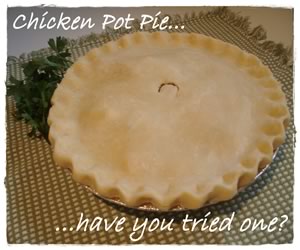 Heatherlea Chicken Pot Pie: The crust is perfect — flaky and flavourful, and the filling has just the right proportions of wonderfully moist chunks of chicken and fresh-tasting and textured vegetables.

Unlike her husband, Pat is a city kid who was once appalled to see the family she’d married into swatting flies that had invaded the farmhouse during the dog days of summer. She admits that her favourite part of the business is the cooking.

Pat’s culinary skills are appreciated by more people than me. Gail Gordon Oliver, the publisher/editor of Edible Toronto magazine, has a farm not too far away. She can’t get enough of Heatherlea’s “so perfect” chicken pot pies, is a big fan of Pat’s rhubarb pies, and admits to being a rib-eye steak fanatic. “Heatherlea is pretty much where I buy my meat now,” she says.

Heatherlea is a family business, and as I sit on the screened porch in the old red brick farmhouse, next door to where I lived for the first twenty-one years of my life, I see Gord in a new light – one that closes the divide between farmer and consumer.

With Pat, Don and Melinda looking on, he explains, “It’s pretty neat seeing what we can accomplish here. We’re telling the big corporations like Loblaws what to do.”