A Caledon East resident, Louise retired ten years ago from a career in human resources with Environment Canada, specializing in values and ethics.

Louise Kindree has a fridge magnet that admonishes, “Shoot me before I volunteer again” – a message she consistently ignores.

A decade ago she began volunteering once weekly in ambulatory care at Headwaters Health Care Centre. Since then, her desire to participate in the hospital’s future has only grown – and so have her responsibilities. She is currently chair of the board of directors, a volunteer position she will hold for a year. 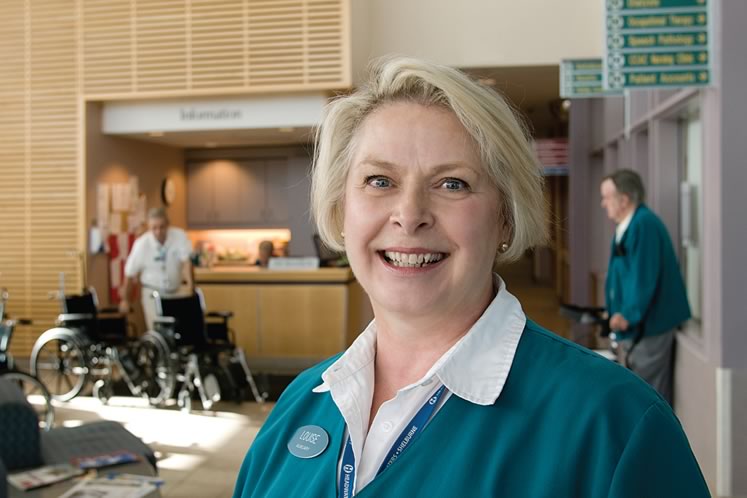 Louise says her primary goal in that time will be to create a long-term vision statement, in consultation with a team of community people and hospital employees, that will guide the hospital’s focus over the next twenty years.

“It’s going to take some ‘pie in the sky’ thinking,” she says, “but if we want to start a substantial financial campaign, we should be able to hand people clear information about what we aim to achieve.”

Also high on her agenda is dealing with the impact of the controversial bed closures in Shelburne.

“I have never seen a more difficult decision taken by the board,” she says. However, she firmly believes that the action has spurred the Central-West LHIN (Local Health Integration Network) to reassess Shelburne’s health care needs.

A Caledon East resident, Louise retired ten years ago from a career in human resources with Environment Canada, specializing in values and ethics. Her plan to relax for six months was scuttled when she joined the hospital auxiliary two months later.

“There are a lot of ‘medical-type’ people in our family and, coupled with having been in a scientific organization, the workings of a hospital were not foreign to me,” Louise says. Her once-weekly volunteer commitment doubled and tripled as she became emergency department convenor and soon took over the reins as volunteer co-ordinator. Next came the role as auxiliary representative on the hospital’s privacy committee and involvement in developing a pandemic plan for volunteers, which she wrote.

She has also served on Dufferin’s physician recruitment team since its inception, a natural fit influenced by her brother, Gord. He is a doctor who designed a benchmark recruitment program for Marathon, Ontario.

When Louise was approached five years ago to sit on the hospital board, she jumped at the opportunity. “I was seeing the hospital as a volunteer – which was in a way like an employee,” Louise says, “and also as a hospital partner with the physician search committee, which is not a hospital-affiliated organization. So I saw the opportunity as a board member to see the management side.”

Louise will remove her board-chair hat and don her hat as chair of the recruitment committee to prepare for a second clinic on the hospital property. The new clinic will house specialists, creating space for more family doctors in the existing Highlands Health Network.

“We’ll probably fill the quota of new family doctors from day one,” she says, undeniably proud of the committee’s success.

Even with all that, Louise continues to volunteer weekly at the hospital inquiry desk. “I love it. It gives me a chance to keep in touch with the com-munity and the staff.”

Quick to say that volunteering is not 100 per cent of her life, Louise makes sure she finds time for her husband, Roger, and frequent visits to her daughter and grandson in Calgary. Still, she adds with a laugh, “I’m probably just a person who can’t say no.”