A registered Canadian charity, Achill Choral Society began as a community choir in 1982.

The hills of Headwaters are alive with the sound of music – and so are the valleys. Hockley Valley, to be precise. Every Wednesday evening since September, the glorious strains of Handel’s Messiah have echoed from Hockley Seniors’ Hall as Achill Choral Society prepares for its Christmas concerts.

The chatter that fills the hall on the first evening that the group reconvenes for its twenty-eighth season is cut short at precisely 7:30 as conductor A. Dale Wood strikes the first chords on the piano. Men and women hustle to their seats, open their scores, and break into song.

Dale is the founding director of the chorus and his likeability is immediately evident. He fires off puns and quips that keep the singers smiling and chuckling, all the while playing piano with one hand and conducting with the other.

“We’ve got to get a Handel on this,” he says as they struggle through a section. Groans and laughter break the tension. They sample various parts of the score as they reconnect with the music. The choir performed Messiah at two sold-out venues in 2003, so the majority are familiar with the work. But Dale will not let them rest on their laurels, he challenges them with a section they had not sung in their previous concert.

“You’ve sort of got the idea,” he says after the first note-bashing attempt. “Let’s go through it again and I’ll see you at the end … maybe.” More laughter.

With each repetition, the long trills – like a million notes cascading over a waterfall – become cleaner and more precise.

A registered Canadian charity, Achill Choral Society began as a community choir in 1982. Over the years its ranks have swelled to eighty-five members who hail from a wide area north-west of Toronto and range in age from late twenties to well into their eighties. They regularly perform in communities across the Headwaters and South Simcoe regions, filling churches and halls with the joy of music. Constantly evolving and improving, the choir has also performed throughout Ontario and toured England, Ireland and Holland.

The choir was founded in the tiny hamlet of Achill, near Hockley. The hamlet was settled in the early 1800s by Irish immigrants from Achill Island off the west coast of Ireland. Pronounced Ak-ill, the word is Gaelic for “eagle,” and ACS uses a combination eagle feather and keyboard as its logo. During their twentieth anniversary tour to Ireland, the choir performed on Achill Island, where, says Dale, they were received like family.

A resident of Georgetown, Dale is also director of the Georgetown Choral Society and the George-town Children’s Chorus. His own compositions and arrangements have been performed by his choirs and are included on one of Achill’s two CDs.

“I sometimes have more fun than the choirs,” Dale admits, although the return rate indicates that he’s not the only one having a good time.

According to Anne Luttrell, one of eight founding members still with the choir, there is a great deal of camaraderie in the group. “Dale is a cementing factor,” Anne says. “He knows what we can do and we know what he expects.”

But Dale doesn’t keep this well-oiled machine “humming” on his own. Last season, for example, he took a leave of absence and Susan Verduin, who has sung with ACS for fifteen years, left the secure confines of the choir to pick up the conductor’s baton for the spring concert. And a large executive committee toils vigorously behind the scenes.

“We love singing and we love communicating the joy of singing to our audiences,” says choir president Mark Whitcombe. But he acknowledges to make that happen, “there’s a tremendous amount of work required.” He and his wife Cathy, a past president, have been choir members since 1992.

Along with financial management and promotion, the executive committee’s duties include such tasks as locating venues, organizing chairs or riser set-up and tear-down, and maintaining the music library.

Anne Luttrell, 73, filled the librarian’s role for fourteen years before stepping down this fall. The librarian’s job begins when the music committee and director have finalized the musical choices for the next season.

Locating music for a single work that fills an evening is relatively straightforward, Anne says. “Because Messiah is well known, many choirs have done it and you can easily find a choir to rent music from.” Also, the majority of choir members purchased their own copies when they performed it in 2003.

But, for some concerts, such as last spring’s medley of twenty songs from the world of film, Anne had to search all over the country for choral versions of songs usually sung as solos.

Music is rented, bought or borrowed and then handed out to choir members at the end of the season so they have the music and practice tapes to work on over the summer.

ACS’s library currently stores some 500 works, with eighty or so copies of each. Once performed many of the songs are not repeated and the librarian is responsible for renting or lending them to other choirs – and making sure they are returned.

Along with concerts each Christmas and spring, ACS presents benefit concerts and provides entertainment in seniors’ residences. They have helped raise money for Canadian Red Cross, The Rotary Club of Orangeville, Headwaters Health Care Centre, Canadian Cancer Society and The McMichael Gallery.

As much as ACS continually strives to elevate its amateur status, the members also value their roots the community. The latter is aided no doubt by their tradition of providing desserts to the audience following each performance. For the last two springs they have also put on a fundraising evening of cabaret-style music, followed by all-you-can-eat desserts. This is a group that loves to sing and bake!

Their determination to maintain modest ticket prices means expenses are not always covered and “We constantly need to fundraise,” says Cathy Whitcombe. Expenses include paying the director and accompanist, she explains, and, in the case of Messiah, hiring four professional soloists and a twelve-piece orchestra.

The licence fee paid for the use of every musical score also takes a percentage out of the budget. And then there’s the cost of wardrobe, which has a life-span of about five years. A Trillium grant covered the cost of a new wardrobe five years ago, but it is nearing that time again.

Dale continually challenges the choir in the months leading up to their three performances of Messiah, working on phrasing and dynamics as they prepare for the final rehearsals with soloists and orchestra. Parts of some sections – soprano, alto, tenor and bass – rehearse informally on their own, and extra rehearsals en masse are called if required.

When they finally come together with soloists Stephanie Kramer, Jennifer Enns Modolo, Mark DuBois and Daniel Lichti, along with organist Shawn Grenke and The Valen Ensemble orchestra, the choir must be in peak form.

Tenor Mark DuBois has been guest soloist with the Achill choir on many occasions over the past eight years. “I find them to be one of the most enthusiastic and competent community choirs that I have ever sung with,” he says. “Making the music is always fun, professional and gratifying.” Whether he’s conducting Handel, Mozart or Mendelssohn, Mark adds, Dale Wood is “a consummate professional and musician of great talent.”

“Messiah is a major work, but this choir has done some marvellously difficult major works in the past,” Dale says. “I’m very proud of them. They work so hard and turn out the best product possible. They sense their achievement more than a professional would and that’s worth a thousand bucks right there, just to watch them and see the audience respond.”

With its haunting and transcendent beauty, Handel’s Messiah is perhaps the most performed work in musical history. This season it will be sung by thousands and heard by millions throughout the world. Thanks to Achill Choral Society, the hills of Headwaters won’t miss out.

The Origins of Messiah 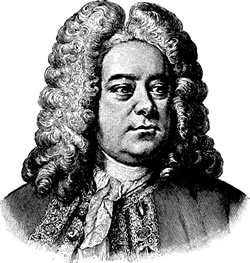 Of all the proclaimed works of music tied to the Christmas season, perhaps none is more revered than George Frideric Handel’s Messiah.

The German-British Baroque composer was born in 1685 and hid his early musical talent from his barber-surgeon father, who hated music and wanted Handel to become a successful lawyer. However, the young Handel honed his skills on a spinet harpsichord concealed in the attic of his home – each string wrapped with thin strips of cloth so he could play undetected.

When Handel was eight or nine years old, the Duke of Weissenfels heard the youngster play the postlude to a church service and told his father he should encourage his son’s talent.

Handel moved to Italy where he achieved success in every musical genre, and then to England in 1712 where he enjoyed continued popularity, composing about forty operas and twenty-six oratorios over the next thirty years.

However, after two failed operas, he fell on hard financial times. He considered returning to Germany, but instead of giving up, he turned more strongly to God.

In the late summer of 1741 he began to compose music to Biblical texts compiled by his friend Charles Jennens. By all accounts Handel worked feverishly on the score, often going without food and not leaving his house during the twenty-four days it took to compose Messiah. While writing the Hallelujah Chorus, he was indeed inspired, saying “I did think I did see all Heaven before me, and the great God himself.”

Messiah was first performed around the Easter season in Dublin, Ireland in 1742, not in a church but in a music hall on Fishamble Street. It immediately won huge popular acclaim and, anticipating large crowds, newspaper ads requested ladies to refrain from wearing hoops under their skirts and asked the men to come without their swords so that seating could be efficiently accomplished. Handel designated all concert proceeds to three prominent Dublin charities.

Unfortunately, when Handel took Messiah to Covent Garden Theatre in London in March 1743, critics were unimpressed and reviews critical. Messiah was cast aside and nearly forgotten until charitable performances in 1750 brought it back to life and restored its popularity.

One lasting tradition from those early performances was the act of standing for the Hallelujah Chorus, initiated when King George II rose from his seat at the beginning of the chorus. Whether the king stood because he was moved by the music or merely wanted to stretch his legs is unclear, but etiquette of the era demanded that if the king stood so should everyone – and a tradition was born.

Two days before Palm Sunday in 1779, Handel collapsed after conducting a performance of Messiah. He died on Good Friday, seventeen years after the Dublin debut.

Messiah’s lasting popularity has been linked to the spaciousness in Handel’s music, the dramatic silences and stirring contrasts. The music is a blend of styles: English church music, German passion-music and Italian melodic style. Three of the choruses were arranged from Italian love-duets that Handel had written thirty years earlier. Although based on Biblical verses, Messiah does not tell a story in the conventional terms of most Baroque oratorios and demonstrates Handel’s abilities as an operatic composer.

Franz Joseph Haydn, after hearing Handel’s Messiah for the first time, declared him “master of us all.”