The Rudiments of roots

Root vegetables – so called because the edible portion of the plant is the underground root – are harvested in late fall and cellared with the dirt still clinging to their flesh.

Ah, winter. Farewell to the feel of black earth sifting through your fingers, the smell of fresh pea shoots bursting on the vine, and the sweet taste of the sun in your homegrown tomatoes and strawberries. Hopefully you have filled your pantries and cold-storage rooms with sparkling jars of fruit jams, jellies and preserves to keep hearts warmed and spirits lifted during the long cold months to come.

We enjoyed a spectacular summer harvest in Ontario this year. And the fall harvest of root vegetables that will see us through the winter has been equally bountiful.

Root vegetables – so called because the edible portion of the plant is the underground root – are harvested in late fall and cellared with the dirt still clinging to their flesh. Squash, celery root, carrots, beets, turnips, parsnips, potatoes and sweet potatoes will remain fresh for many months when stored in a cool, dark place. The carbohydrates and high vitamin content of these vegetables make them a nourishing and hearty choice for winter stews, pies and side dishes.

Many people are quick to turn up their noses at root vegetables, probably because they’ve encountered unfortunate versions of mushy turnips and bland carrots. But there is great beauty and flavour to be found in the deep, rich colours and earthy taste of root vegetables. And the best way to bring out those characteristics is to keep them far, far away from that pot of boiling water.

Although boiling is a quick and easy way to prepare vegetables, it is a cooking method better suited to more delicate, leafy ones. Rather than boiling them, roasting root vegetables yields a sweet flavor as the natural sugars within the vegetables caramelize. Roasting also retains the water-soluble minerals that get lost in the turbulence of boiling water, so you get a more nutritious bang for your bite.

The method for roasting root vegetables is even simpler than boiling. Coat them in a little oil, dust with fresh herbs such as thyme, chives, rosemary, sage or oregano, and pop them into a 300°F oven. Give the pan a little shake to toss them every now and then until they are evenly cooked and tender when poked with a fork.

My personal favourite way to cook root vegetables is to use the confit method. In other words, submerge the vegetables in fat. Yum, right?

While it may not sound healthy, in fact confit cooking is much healthier than other modes of cooking. For example, deep frying vegetables in very hot oil forces the food to absorb the cooking fat, while nutrients leak out, as in boiling. The confit method is quite the opposite. When vegetables are cooked slowly in oil at a very low temperature, very little oil is absorbed and flavour and nutrients are retained. Grapeseed oil is a great choice for confit, as it has no trans fat and no cholesterol.

Confit vegetables are like super vegetables. The colour and natural sweetness of root vegetables become more concentrated and powerful than they do with any other cooking method.

Those who know chefs know we don’t like to waste anything, so I recycle the used confit oil as a base for salad dressings or stir-fries. The leftover oil is delicately flavoured with whatever vegetables and herbs I used in the confit, adding a nice complexity to any dish.

It might be asking too much to get your kids to eat their turnips, but I’m sure a carrot confit or a roasted sweet potato flan would be just the thing to get your family excited about winter vegetables. Go on, give it a try. I’ll be rooting for you.

Peel and dice all vegetables into ¼-inch pieces. Place diced vegetables into individual metal containers. Add garlic clove, shallot piece, 1 sprig of rosemary and 2 sprigs of thyme to each container. Add oil until the vegetables are just covered. Wrap in tin foil.

The vegetables must be cooked in separate containers because they cook at different rates. You can cook them one at a time, transferring the oil from vegetable to vegetable, but this will take a long time.

Place the wrapped containers in the oven pre-heated to 300°F. Check and remove each type of vegetable when it is barely cooked. Strain and cool in fridge. Combine the vegetables and reheat to serve.

At the end of the cooking process, reserve the oil and use it as you normally would, it now has extra flavour, but will cook the same as it did before. Serves 6. 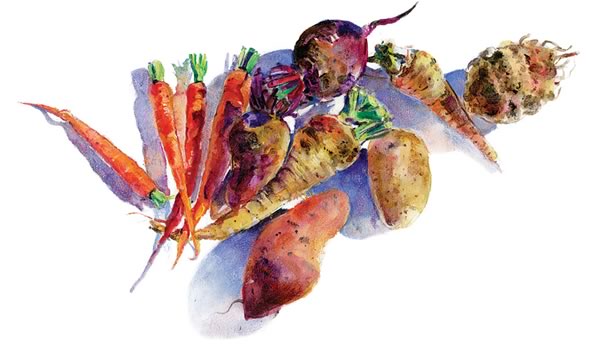 The rudiments of roots. Illustration by Shelagh Armstrong.

About the Author More by Roberto Frachionni