Pat’s work will be included in an exhibition called Stitches Across Time at Dufferin County Museum and Archives this spring and summer.

“Will you walk into my parlour?” said the Spider to the Fly,
“’Tis the prettiest little parlour that ever you did spy;
The way into my parlour is up a winding stair,
And I’ve a many curious things to shew when you are there.”
Mary Howitt

The parlour, in this case, belongs to textile artist Pat Burns-Wendland, the location is her Mulmur home and studio, aptly named The Spider’s Web, and up the winding staircase is one of three studios where she creates magnificent wearable artwork – without trapping a single fly.

Pat’s work will be included in an exhibition called Stitches Across Time at Dufferin County Museum and Archives this spring and summer. The juried show features contemporary fibre-art creations by twenty-one artists, inspired by historic clothing and textiles from the museum’s collection.

Pat is not only an exhibitor, but also a key organizer of the show, a role she embraced as a duty to her own art and her fellow textile artists who, she says, struggle to gain recognition in this country. 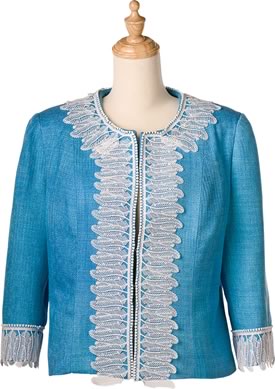 Jacket that Pat wove, dyed and constructed for Stitches Across Time. Photo by Pete Paterson

“Unfortunately, in Canada, fabric artists are not considered artists as they are in other parts of the world. Here, we are considered craft people.” Pat says. “We are a craft, but we are a high-end craft. People look at me and think I’m a dressmaker, or I’m a sewer – and I’m not. I’m a builder of garments.”

In fact, Pat is a finalist for the second time this year in the annual NICHE Awards, an international competition sponsored by the American NICHE magazine to celebrate excellence and innovation in fine craft. (Two other Mulmur artists, wood-turner Jim Lorriman and sculptor Ken Hall are also finalists in their categories.)

The NICHE nomination is an honour, but the recognition is something Pat wishes she didn’t have to go abroad to receive.

And so, in company of a like-minded group of artists and art enthusiasts, Pat approached the museum with the idea for a Canadian show.

Pat is no stranger to that kind of creative activism. Since moving to Mulmur from Woodbridge eight years ago, she has been immersed in the local artistic community. A master spinner and member of Ontario Handweavers and Spinners, she has worked with the Dufferin Arts Council, Headwaters Arts and is a founding member of the thriving Nottawasaga Handweavers and Spinners Guild.

Pat was introduced to spinning in the early seventies when she took classes from Edna Blackburn, an Albion neighbour and pioneer in the revival of spinning and weaving arts. After that she pursued formal training, travelling to Australia to research her master spinners thesis on Merino sheep.

“But, when I think about it, my career is really just getting started,” says Pat, now 65, “and that’s due to the people I’ve been involved with here.”

For many years, she had been content to make flatware – scarves, shawls and other such garments for herself. But in the mid-nineties, her career took a turn. Spurred on by weavers Lucille Crighton and Joanna Dobbin, she was encouraged to sell her work at the newly opened Williams Mill Gallery in Glen Williams.

Joanna urged Pat to weave the fabric and give it to a dressmaker, “but I dye my yarns and weave my cloth and with the number of hours I put into weaving a piece of cloth, I thought, if I cut into it and make a mistake, that’s no problem,” but the notion of someone else doing the same left her cold. So she decided to sew her own garments.

After a few efforts and a severe dressing down by the resident dress-maker, Pat realized she lacked sewing finesse. She applied to the dressmaking certificate course in Seneca College’s fashion arts program, graduating with high honours in 2000. “So it was the best thing that could have happened to me, because it spurred me on.”

As her work has evolved, Pat has become increasingly interested in surface design, including the layering of dyes and use of stamps, stencils and foils after the fabric has been woven. She is also experimenting with devoré, a process that burns away a portion of the cloth.

Colour and texture are the constant inspirations for her work, with sources ranging from books, photo-graphs of polished rock, or even the black and white pottery and unique buttons created by Amaranth potter Rosemary Molesworth.

“Now I’m doing more pieces that can be considered wall art – large kimonos that could hang on the wall,” Pat says. 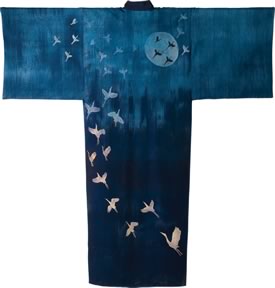 She shows me the kimono that will be featured in the Stitches exhibition. Called Midnight Flight, it is a stunning garment in blues that progress from darkness at the bottom to light at shoulder level and with a full moon adorning the upper back. Stencilled herons wing their way across the garment in diverse shades created with the use of discharge paste which draws the dye from fabric. The silk lining is also hand-dyed and discharged with images of feathers and wings.

Its beauty is luxurious and I can’t decide which would be more pleasurable – wearing it or displaying it on the wall. All Pat’s garments are washable, so there is no reason why I couldn’t do both!

Pat walks me through the lengthy process to the finished product, explaining the progression in each studio. She starts with the finest quality silk, tencel, rayon, cotton or wool and, after the warp is made, proceeds to her dye studio where she paints the yarns with brushes and dyes like a watercolour. It takes about two days for the dye to set. It is then washed thoroughly with lots of water and allowed to dry.

The sun-drenched weaving studio is chock-a-block with looms, fabrics and yarns, along with two chatty parrots who keep her company as she works. Once the yardage is woven, Pat moves to her sewing studio, using either a commercial pattern or her own design to create a garment. She crafts small remnants into bags or hats trimmed with fur. Each is a unique work of art.

Although she is on the committee for the Stitches exhibition, Pat’s entry was juried blind along with all the others.

“We went to the Ontario Crafts Council and explained the situation to ensure there was no conflict of interest,” Pat says.

There have been no unfair advantages along the way, she explains. Even the eight inspirational items from the museum’s collection were locked securely away, available for viewing only on the show’s website to ensure that local artists had no unfair advantage over artists submitting from elsewhere in the country.

Pat is hoping for a successful show that will educate people on textile arts and artists. “I’m just a small cog in the machinery of this project,” she insists, crediting the hard work of her fellow committee members Monica O’Halloran-Schut, Nancy Turner (whose work is also in the show), Barb Hilts, Shelagh Roberts and Sarah Robertson, along with the museum staff, for pulling the ambitious project together. 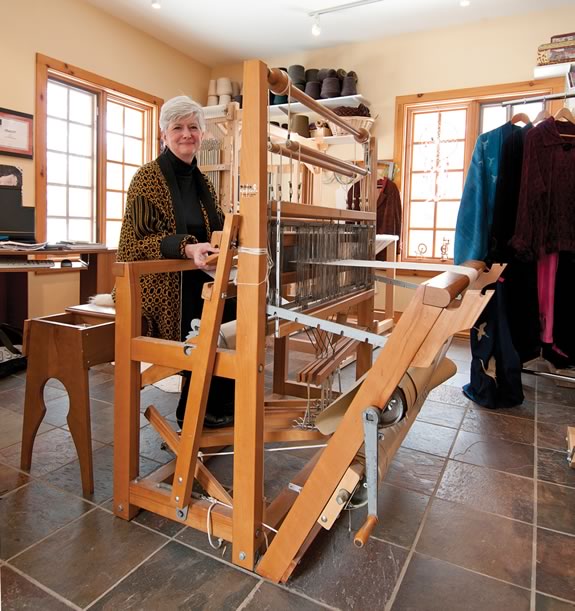 In The Spider’s Web: Pat Burns-Wendland at work in her studio in Mulmur. Photo by Pete Paterson

Stitches Across Time runs from May 27 to August 21 at Dufferin County Museum & Archives at Airport Road and Hwy 89. It is a highlight of the museum’s year-long exhibit called Textiles: More than Words Can Say, featuring fashions, accessories, quilts, rugs and other cloth artifacts from pioneer days to the present.

Throughout July and August, there will be more than a dozen show-related workshops, lectures and other activities, on and off site, including a fashion show and dinner at Mrs. Mitchell’s Restaurant in Violet Hill on July 20. The program also includes a series of workshops for children.

For the full schedule of events, and to view the show’s inspiration pieces supplied by the museum, see stitchesacrosstime.com.

To see more of Pat Burns-Wendland’s handwoven garments, visit her website at patburnswendland.com.