There are strollers in the halls and moms in the classroom at ODSS, thanks to an innovative program that gives young parents a chance to complete their secondary school education.…

There are strollers in the halls and moms in the classroom at ODSS, thanks to an innovative program that gives young parents a chance to complete their secondary school education.

High school gives Rae Hiltz a break from her children and the demands of motherhood. “All mothers need that time,” she says. “And my time is at school.”

Confident, articulate and energetic, Rae looks like any other bright young high-school student. “When people first see me, they don’t realize I have children,” she says. “They expect me to hang out, party, and do things that regular teens get to do. But it’s really not that simple. I rarely ever do things without my children.”

Rae, 20, has two children with her fiancé, Ben. Noah is two-and-a-half, just eleven months older than his sister Isabelle. Rae and the children live with Ben’s parents, while he lives nearby. Her parents aren’t really in the picture. “They’re going through their own drama right now,” she explains. “Ben’s parents are picking up the reins. They’re doing enough for everybody. They’re amazing.”

Rae left home and dropped out of school when she was sixteen. “I was going down a long road that included drug and alcohol abuse and eating disorders.”

It was the birth of her children and the responsibilities of motherhood that made her realize the importance of an education. She tried to complete some courses on her own, but her children weren’t in daycare and it wasn’t working.

“I thought it was hopeless,” she says. “I didn’t think I’d be able to finish.”

Now Rae is on track to become the first member of her family to graduate from high school. And she has set her sights on a post-secondary degree.

Rae is among sixteen young mothers from Dufferin County who attend the program five afternoons a week. Three afternoons are dedicated to in-class work, while parenting and fitness classes fill the other two. The students also pursue other academic courses independently.

Their babies are cared for by early childhood educators in the converted classroom next door, while older children attend nearby Jean Hamlyn Daycare Centre. 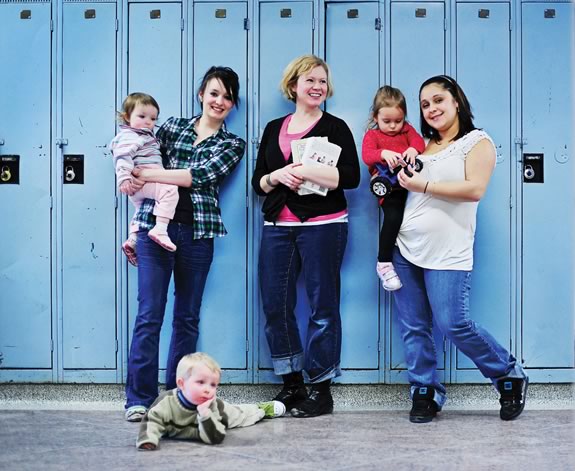 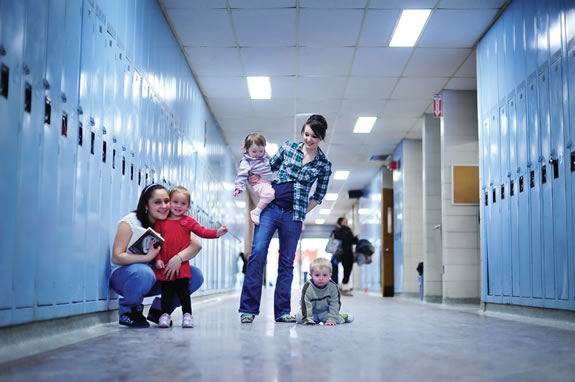 Students Camille Brown (left), with her daughter Ayla, 2½,
and Rae Hiltz, with her children, Isabelle, 1½, and Noah, 2½.
Photo Gillian Gauthier

The same shift occurred for Rae. She’ll finish up her last two credits at summer school this year and hopes to attend university in the fall.
Not all the students are as driven to obtain their credits, but Susie believes they will get there. The courses they are taking in child development and healthy living will help them make better parenting and lifestyle choices along the way, and so will the supportive atmosphere in the classroom.
“If we bring them in in a non-judgmental way and build their trust,” Susie says, “Then we can help them.”
“It keeps young mothers focused and motivated, and teaches them that they are worth investing in,” Camille adds.
Many of these young parents have so much more to worry about than school work, and so many obstacles to overcome in order to graduate. School attendance rules are black and white, but their lives are not.
Few of the students live with their parents, and many are on welfare. Most of them are struggling to make ends meet to feed themselves and their children. Some of them don’t have permanent homes, making communication with them difficult outside of the classroom. Often they are juggling jobs, relationships and the raising of their children along with school work. Some are single parents, shouldering all the responsibility on their own.
Because few students own their own cars, transportation is one of the biggest barriers, especially in the dead of winter when they have to walk to school in frigid temperatures while pushing a stroller through the snow.
Even through these struggles, the seventeen students who completed the first semester attempted sixty-five credits toward their high school diplomas. They earned forty of these, with final marks as high as the mid-nineties, with another twenty-two near completion.

Susie is quick to credit the students’ commitment and motivation, but Camille says that “Ms. C” plays the biggest part in the program’s success. “She’s a great teacher. She does anything she can to help the students.”

That “anything” can go well beyond the scope of the average teacher, including delivering groceries to students who can’t afford them and securing donations of clothing, diapers and grocery store gift cards. The students come to her with issues that are beyond her expertise, and then she acts as a liaison between them and the resources they need, such as social workers. “If you get in touch with the right people and services, it can get better quickly.”

And that, really, is why the program exists. “It’s not about how they got here,” Susie says. “It’s about their potential and how to help them reach it.” She knows the odds are stacked against young parents, especially mothers, without a program such as YPEP.

In its 2006 community health status update, Wellington-Dufferin-Guelph Public Health reported that approximately one in a hundred teenage girls will have a baby in Dufferin County (lower than the provincial average of four per hundred). According to the Ontario Ministry of Health, early mother-hood “can be a significant predictor of other social, educational and employment barriers in later life.”

In addition, children of teens are more likely to become teen parents themselves, resulting in a setback for another generation. In fact, many of the parents of the YPEP students were young parents themselves.

But in this program, in Susie Chamberlain’s classroom, there is hope. Rae and Camille look forward to sharing their stories with their children when they are older, how they were able to graduate while still caring for them. “And let her know that it’s not easy and hopefully prevent her from becoming a teen parent,” Camille adds. “I don’t want that for my child. An education should definitely come before children.”

Susie looks forward too. She envisions the future successes of her students, confident that when she sees them again in twenty years, they will have achieved their goals and will be helping their children reach for their dreams as well.

A freelance writer and mother of five, Laura LaRocca lives in Laurel.

The Young Parents Education Program is open to young mothers or fathers, age 14 to 19, by self-referral or through a Dufferin health or social service agency.

Donations to the program are appreciated. Grocery store gift cards are especially useful. Items such as used clothing and toys can be dropped off at As We Grow, 113 Broadway, Orangeville, where the YPEP has an account.

Additional resources related to this story: