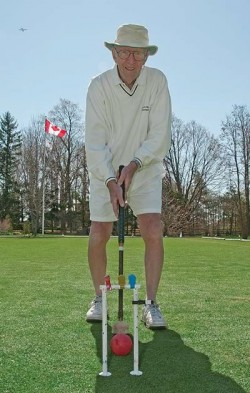 Bob prepares for a shot. Photo by Pete Paterson

His playful eyes sparkling, Bob Wille begins recounting a story about his wife Audrey. Although both are itching to get me on the court, I want to learn about how the couple became involved in a game that most people think of as something played by kids in the backyard on hot summer afternoons.

Bob explains how one day in 1991, he was at the Caledon Mountain Trout Club taking drinks around to fellow members who were fishing or engaged in some other outdoor activity. When he spied a woman teaching some cockamamie game on the club’s badminton green, he wandered over and asked her if she would like something to drink. “Of course not,” she responded, “can’t you see what I’m doing?” Actually, Bob wasn’t at all that sure what she was doing, but he could take a hint. Little did he know then how croquet, the game she was playing, would figure into his life.

Croquet, at least the version I was about to learn, is both remarkably like and completely different from what most kids play. Manufacturers estimate that 100,000 backyard croquet sets are sold each year in Canada. They consist of nine white wire hoops, two striped pegs and a set of coloured wooden mallets and balls.

At the Trout Club party later that evening, Bob spotted Audrey. Summoning up his courage, he made his way over and asked her to dance. The night went well, ending with a kiss as Bob tucked Audrey into her car to drive home. Bob used the guise of his interest in croquet to arrange to meet Audrey again. That “date” became dinner. A year later the couple married and croquet has been central to their lives ever since.

The Willes have Caledon’s only official-size croquet “court.” While the court is Bob’s baby, the game is Audrey’s. At 73, she has the lowest handicap (-0.5) of any woman in North America. In a game that has to be the world’s most politically correct – there are no allowances for age or gender.

“I took to the game right away,” she recalls. It all began in 1988 when her neighbour Shirley Coombes, whose arthritis had forced her to give up riding, invited a dozen girlfriends over to play. What ensued was the Caledon Croquet Club, which eventually graduated from Shirley’s front lawn to the lawn bowling green in Monora Park, just north of Orangeville, and finally to the Willes’ after they built their court in 2001. The ladies learned that while they still used mallets – though much heavier ones – and still had to put the ball – which now weighed a pound – through a hoop – now called a wicket – the similarities stopped there.

Playing by American rules, they were immersed in a sport often referred to as “chess on grass.” Not only does it take considerable hand-eye coordination to put the ball through the narrow wickets (only about 1/16 of an inch wider than the ball), but with roquets and croquets, peels, pegs and three-ball breaks to worry about, strategy, memory, planning and cunning are key to the game.

No longer able to resist the court’s pull, Bob, Audrey and I stroll out as the late afternoon air begins to cool. To build their court, the Willes levelled the area before about a dozen trucks dumped their loads of special “sharp” sand. Bob recalls rolling it and rolling it and rolling it until, with the help of a laser, he was confident it was perfectly flat. He planted bent grass, and the next spring, Bob and Audrey began hosting their friends, tournaments and practice groups on what, with Bob’s daily attention, had become an emerald green carpet. Members of the Caledon club now travel to play twice a week from as far away as Toronto, Milton and Collingwood.

Though not his sport of choice, Bob took it up in earnest when he realized that his winters were going to evolve around Audrey’s tournaments, mostly in Florida, but throughout the US and beyond. The last time they counted, in 2006, the two of them had competed in 127 tournaments and collected 122 trophies.

Back on the court, Audrey and Bob give me tips as we try the American-rules game. I learn about the deadness board which records which balls are “dead” – another player’s ball can only be hit (roqueted) once per wicket. We’re playing singles, so we each play two balls, a deviation from the backyard game that requires a very strategic approach. (In doubles, partners each play one ball). Deciding what shot to take next, who to hit and where to send my opponent’s ball makes me understand the comparison to chess. 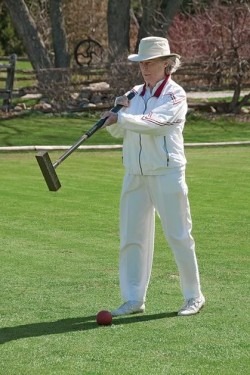 Audrey prefers American rules (as opposed to Association rules played in most places outside North America) and shines in the singles competition. “I can focus my strategy myself better than with a partner.”

Her most memorable win came against a man in Florida. “He was winning 24 to 7 and all he had to do was hit the peg with his two balls and it would have been over,” she recalls. (After making it through the six wickets twice, you have to hit a wooden peg with both of your balls to win the game.) “I managed to hit in and run the remaining wickets with both balls and peg out first. It was a nice comeback,” Audrey tells me, using a handful of terms that define this lingo-ridden game.

I learn to keep my head down and watch the ball as I strike it. “Don’t forget to follow through,” Bob advises me. I eventually put my ball through a wicket, having forgotten my nervousness at playing with North America’s lowest handicapped woman looking on.

The following day, I return to the Willes to join the Boston Millers for some “golf” croquet, a game they play each Sunday morning through the summer. It’s a casual affair among close neighbours. We are turned out in comfortable everyday clothing, whereas members of the Caledon Croquet Club, who play on Tuesdays and Thursdays, wear whites, a practice that harkens back to the game’s early days in the late 1800s as it was played at the All England Croquet and Lawn Tennis Club (aka Wimbledon).

Golf croquet is a straightforward, quick game. It’s also social, full of jokes and smiles. Emery Branscombe, my partner, gives me helpful tips as we win four to two. “I peaked a few years ago with a handicap of three [in American rules],” Emery tells me. “Now I find it difficult to keep up with all of the strategy.” Good for a Sunday morning with friends, golf croquet lacks the intrigue of the American-rules game.

Wayne Harper and Colleen Whitney join Audrey and Bob for a game. A fellow Boston Miller, Wayne sometimes brings his grandson to play. Audrey says that she has often competed against teenagers – one of the pleasures of the game is that all ages can play together. Croquet was even an Olympic sport in 1900 in Paris and again in 1904 in St. Louis.

I could see how the strategy would captivate me if I were to take up with the Caledon Croquet Club. But I’d miss the physical challenge of a sport such as cycling or cross-country skiing or, especially, tennis, a game that combines some of croquet’s strategy with heavy-duty physical demands. But for anyone with a trick knee, for instance, croquet has lots to offer – romance even. Then I wonder if croquet is one of those games that gets under your skin as you improve and learn its intricacies, so I ask Bob about that. Despite his croquet prowess (a two handicap), he quips: “I took to Audrey faster than I took to the sport!” 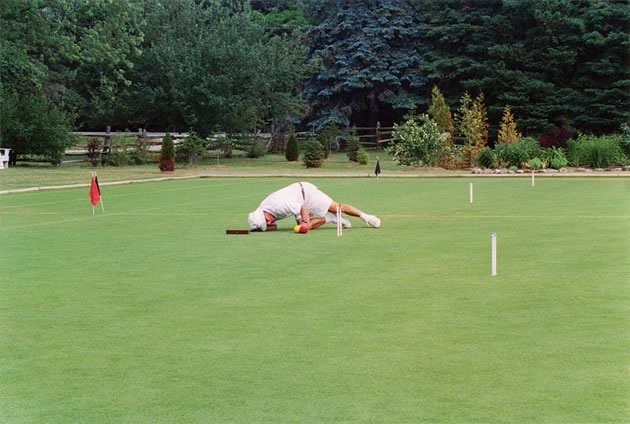