Like Your Mom And Popeye Told You: Queen Victoria Baby Leaf Spinach comes from right here in Dufferin County!

If you are like me, you probably figure that greens sold in ready-made packages are well-travelled by the time they arrive on grocery store shelves. Well, it turns out that’s not necessarily the case, at least not if you buy Queen Victoria Baby Leaf Spinach from just about any super­market in Southern Ontario between mid-June and late October.

Packaged in Burlington, these greens come from right here in Dufferin County. They are grown by the Collins family – Betsy, Jim, their three grown children, and their daughter- and son-in-law – on 500 acres surrounding their new home and warehouse on the corner of Mono’s 15 Sideroad and the Amaranth Townline. The Collins, I’m soon to learn, are crazy about their spinach, and they grow it so meticulously – so unlike what you might expect of such a large operation – that I predict you’ll be crazy about it too.

I pulled up to their two-year old home on a blustery April afternoon. Evenly spaced, poker-straight stakes with reflectors made sure my car didn’t drift on to their perfectly trimmed lawn. Once inside the 3,000-square-foot, low-profile house that Jim helped design, I couldn’t take my eyes off the reclaimed beech floor. The place was photo-shoot ready and, indeed, it had just been featured in a home-design magazine. Jim said, “I knew I wanted our new home to have a timeless feel about it.” Clearly, he has succeeded. The house has enormous rooms and floor-to-ceiling windows open up to a wide expanse of spinach fields.

In a small agricultural oasis on the Town of Mono’s west side, E & J Collins Limited produces an astound­ing 1,800 tonnes of baby spinach each year, selling virtually all of it to Ippolito Fruit and Produce in Burlington. This food broker washes it, packages it and sends it to pretty much every major grocery store in Southern Ontario, as well as outlets in the U.S. And since Ippolito contracts both Ontario’s major growers, E&J and Jim’s brother Lorne who farms near Guelph, chances are that if you shop at any of the Loblaws chain, most of Sobeys and some Metro stores, you will buy Collins’ spinach. 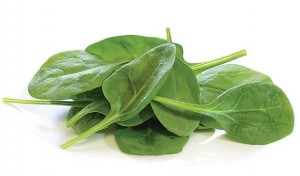 After they were married, Jim and Betsy, began growing spinach on their 60-acre farm near Huttonville. Jim learned the trade from his father, Edward Collins, a.k.a. The Spinach King, who had bought the property in the mid-1950s. But by the 1990s, urban sprawl was taking its toll. “The writing was on the wall,” Jim told me. “We were going to have to sell the farm.”

It was Jim’s parents who found the place in Dufferin County. They used to drive around looking for good soil. When they found some, they’d bring back a bucket of it for their son’s rig­orous inspection (“He even tasted it,” Betsy says.) When they showed him the silt loam from Mono – perfect for potatoes and spinach – Jim said he couldn’t believe it. He’d thought Dufferin was a big swamp.

When he came to see for himself, he discovered that not only was the soil excellent, but the land was flat and there was plenty of clean ground­water. “I don’t like irrigating with river water,” Jim told me, because of the increased risk of contaminants.

As well as offices and equipment storage, their 43,000-square-foot warehouse contains their production line where the harvested spinach is transferred to a conveyor system, sorted, graded, packed into blue-box-sized reusable plastic containers, and stored in cold rooms before being picked up by Ippolito.

The system is mostly mechanized. Two enormous machines cut the spin­ach to within a quarter inch of the ground and pass it into wagons, which are unloaded mechanically onto the conveyor. Jim says that much of his success is because he can keep staff numbers to a minimum. When the operation is going full out, it takes a total of fifteen people to make it purr.

These days, it purrs mostly under the stewardship of the next generation of Collins. Jim is still in control and Betsy does the books, but 31-year-old Elaine looks after human resources, 28-year-old Dan is the field manager, and 24-year-old Julie takes care of shipping and receiving. Brad and Becky, spouses of Elaine and Dan, provide invaluable general help. So tight is the family that both the young couples married in 2009, and both are due with their firstborns in July!

Sticking together is something the kids likely picked up from their parents. Jim grew up in Huttonville and Betsy in Streetsville. They met at Streetsville High School and were among the thirteen couples in their graduating class to marry their high-school sweethearts.

Income from the sale of their Huttonville property to developers certainly helped launch their success­ful operation. But recognizing that food safety was a growing concern, Jim also built a state-of-the-art ware­house that has received rave reviews from experts. He included expensive stainless steel equipment and mech­anized systems that help avoid contamination.

He recalls 2006 when an E. coli disaster involving an organic spinach producer from California bankrupted a number of U.S. producers. Jim got off easily because he was two weeks from his last harvest when the scare hit, and by the time he was producing again the next spring, the fallout from the incident had mostly subsided.

Still, Jim responded to the crisis by implementing a complex traceability program so that in the event of a similar situation, he could prove whether or not his operation was the source of the problem, and if so, exactly which batch was involved. It also made him very wary of organic production. E. coli, he pointed out, comes from cow manure, which is often used to fertilize organic crops. He doesn’t want to take that chance for either financial or health reasons.

Instead, he uses a commercial ferti­lizer and a very limited application of pesticides to ward off the insects and diseases that can plague spinach. Jim explains that although baby spinach is trickier to grow (because it’s more prone to frost damage) than the mat­ure spinach he grew up producing, he switched to baby spinach for two reasons.

The first was a response to the mar­ket: “Everyone wants instant salad.” The second was because disease and insect infestations are less of a risk than for longer-maturing plants. It takes only three weeks to produce a crop of baby spinach during the height of the season, so “weed and disease pressure is almost eliminated.”

As their kids take over the oper­ation, Jim and Betsy find they have some spare time, especially in the winter. Jim works on his customized equipment. They travel, and both are avid skiers. Betsy, a keen cook, says they eat spinach every day. In fact, a cookbook dedicated to spinach sits on the kitchen counter. And, yes, this healthy and prosperous team has heard every Popeye joke anyone could possibly dream up.