Our Meat Birds Have Arrived!

We have decided we want to try raising two different heritage meat birds this year.

We have decided we want to try raising two different heritage meat birds this year.  These breeds have been noted as being two of the tastiest chickens around.  (I’ll let you know when the time comes).  Hmmm…this is going to be an adventure and a challenge for me, the rescuer of animals; the softy of all things soft.

Alas, I eat meat and there is no changing that.  I need to know that the meat I am eating has been treated with respect and that it is as healthy as I want my family to be. 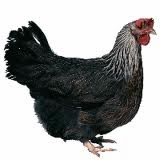 I am no longer comfortable eating meat supplied by factory farms.

The first breed is the endangered Silver Grey Dorking, one of the world’s oldest chickens, originating from Italy during the Roman Empire.  They also have five toes instead of the usual four…weird.  They really are a bit strange because they are the only red ear lobed chicken to lay white eggs (red lobes usually lay brown).

They are so old that Julius Caesar might have munched on a couple in his day!

The other breed we are raising is the critically endangered, extremely rare, Buckeye. They are the only chicken breed developed by a woman…huh…who knew? 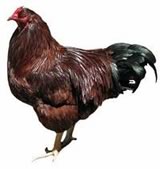 You might be asking yourself, “Why on earth would you eat something that is endangered?”

Well, truth be told, eating them is a way of preserving them!
If you create a desire for the meat then the demand will become greater, therefore, the breeding will become more prominent.  TA-DA!  You will now be preserving these animals!

In fact, I am seriously thinking about breeding them myself, but only time will tell.

These birds are going to live in luxury.

They will be housed in a large coop with a HUGE run filled with grass, trees, ant hills and dirt.  They will run and play and scratch all day.  They will dust bath in the glorious sun and perch high at night.  My meat birds will have a dream life for the short six months they are alive.  They will never see the inside of a cage, the feathers on their necks will not be worn away by wires, and they will not have to breathe ammonia nor sleep in their own filth.  They will not be pumped with antibiotics nor will they be bullied from overcrowding

They will have a glorious 6 months and only one BAD day.

THIS is why I am very proud that we have decided to raise our own meat and are rejecting factory farming.

Now…let’s see if I can go through with it this fall.  Will I have a freezer full of meat or will I be eating a lot of omelettes?

About the Author More by Cathy Bray