Jean Denison finds the Erin Fair’s Optimist fries hard to resist, but she can’t resist the church pies either. 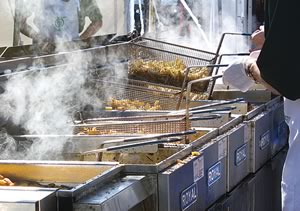 The food served at agricultural fairs may not be the healthiest, but you won’t find any golden arches on the fairgrounds. Lions Club burgers, Optimist Club French fries and United Church cherry pies are the order of the day. And like me, just about everyone who attends one of these annual events has a favourite fair food – or two.

My annual trip to the Erin Fair isn’t complete until I’ve eaten a batch of French fries sold by the Optimist Club. In their yellow cardboard container, fresh from the fryer, these finger-width fries are too hot to eat right away, though I often can’t resist. With tiny beads of still-sizzling oil dotting the surface of the crispy brown potato skin, they absorb the salt that I liberally sprinkle over my obsession. As with all good French fries, I put malt vinegar on them too. Just salt and vinegar, and a warm spot to eat them as I watch the heavy-horse pull. That’s the combo that makes my day at the fair.

Here are the favourites of some other fairgoers: 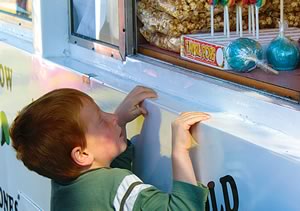 Everyone has a favourite at the fair. Photo by Liz Armstrong

Sandra Shamas also starts her visit the Erin Fair with fries at the Optimist booth, but she follows up with an apple dumpling, slathered in caramel sauce. “I’m a sauce person,” she explains. Shamas is also a fudge addict, and her favourite is the pumpkin pie fudge from Debora’s Chocolates.

Karen McClellan likes to dive into a bison burger at the Orangeville Fair, courtesy of Deer Valley Farm. Then she picks up a steaming baked potato loaded with sour cream, butter, bacon bits, green onions and cheese.

For Jeannette Mason, it’s bacon on a bun and a baked potato at the Bolton Fair.

At the Caledon Fair, Betty Brander makes her way to the Presbyterian Church booth for a homemade egg salad sandwich and a piece of raisin pie.

Wayne Parkinson, like his daughter Sara, is partial to the apple dumplings. “It’s not the Erin Fair without an apple dumpling, or hopefully two or three.” 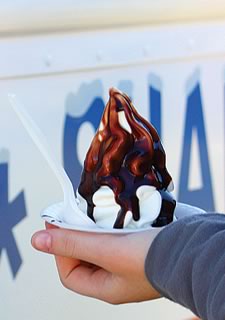 A loaded baked potato is the favourite for Donna Blackwell at the Grand Valley Fair, but, she admits, “I try to patronize all of the booths.”

Though she spends endless hours making apple dumplings at the Erin Fair, June Switzer doesn’t eat them very often. “I like the chocolate milk in the Agricultural Awareness tent, served by the Wellington Dairy Farmers.”

The Burnside family has to cover a lot of ground at the Bolton Fair. Carter says he liked the crêpes they had one year, but a stop for ice cream is on the agenda, as is a cob of hot, buttery corn.

A concession booth at the local agricultural fair is a hot commodity, since it is a major fundraising opportunity for service groups. Paul Kolb, who looks after the concession booths for the Bolton Fair, says, “You get about 500 people calling. We always look after the service groups first [e.g., Lions, Optimists, Rotary, etc…] and we try not to get too many of the same things.”

From cotton candy to giant pumpkins, food is what the area’s fall fairs are all about.